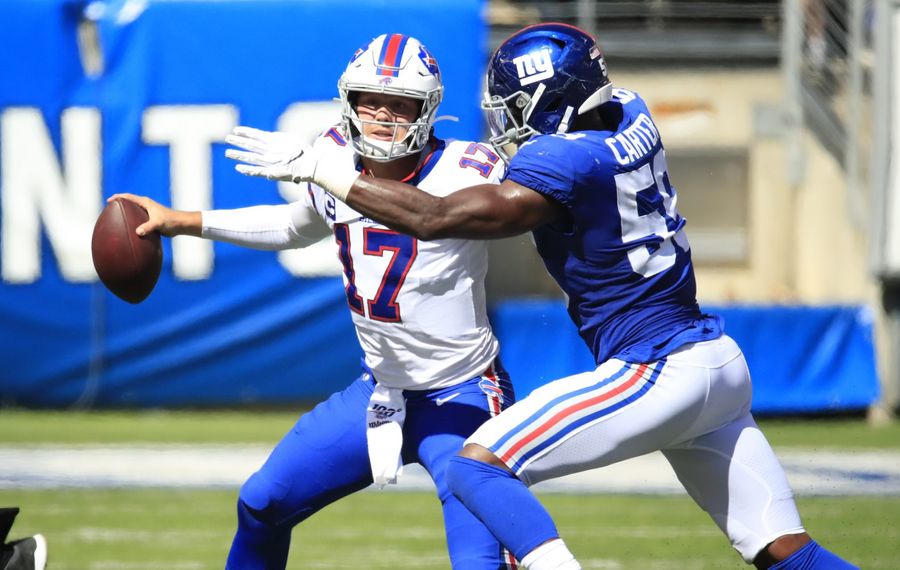 Part of the definition of a franchise quarterback is the ability to make a big-time play in the clutch.

Franchise quarterbacks don’t need to do it all by themselves. They spend most of their time playing smart and distributing the ball to the playmakers around them.

But at a few key points in games, the team needs the big guy behind center to stick a dagger in the heart of the defense.

Josh Allen did it during the clinching drive in the fourth quarter of the Buffalo Bills’ 28-14 victory over the New York Giants. Here’s a closer look at that play and others that shaped the game:

Third down on the run: The Bills were clinging to a 21-14 lead and faced a third-and-6 situation from the Giants’ 40 when Allen showed off his feet and his arm.

The Giants blitzed safety Michael Thomas, but guard Quinton Spain did a good job picking it up. On the right side of the line, guard Jon Feliciano and tackle Ty Nsekhe had some trouble. Giants end Markus Golden crashed inside on Feliciano, who was able to knock him to the ground. But Golden got enough pressure to flush Allen to the right. Nsekhe stumbled backward, leaving Allen dead in the sights of 311-pound B.J. Hill.

But Allen froze Hill with a shimmy move – whoop – and threw on the run to John Brown, who had broken off his route and cut to the right sideline. The 17-yard pass was a bullet on the money.

“I thought he did a really good job,” Giants coach Pat Shurmur said of Allen. “There were a couple times he broke contain, and he made some really nice throws.”

There was a load of critiques, some for good reason, about Allen’s inconsistency throwing on the move during his college career and his rookie season. That pass was a strike that will keep the Allen doubters quiet for at least a week.

Devin Singletary ran for 20 yards on the next play, and the Bills were in the end zone five plays later, with the help of the Giants penalty on a Bills field-goal try.

The Bills led, 28-14, and it essentially was game over. Without Allen’s clutch conversion, however, the last eight minutes would have been more stressful for the Bills.

Red-zone weapon. Bills offensive coordinator Brian Daboll keeps using Allen as a weapon in the red zone. If the Bills spread the field near the goal line, it’s hard to account for a quarterback with exceptional running ability.

Allen scored his 10th rushing touchdown in 13 starts with a 6-yard designed sweep to the right pylon in the first quarter.

Last week against the Jets, Allen scored on a play-action bootleg run to the right.

This time it was a straight student-body sweep to the right, with three receivers lined up to the left to occupy the Giants’ defensive backfield.

The edge off right tackle was secured by tight end Lee Smith, who sealed off rookie linebacker Oshane Ximines. Center Mitch Morse pulled and made a superb cut-block on linebacker Ryan Connelly. Feliciano pulled and pushed the cornerback DeAndre Baker out of the way.

Linebacker Alec Ogletree, chasing from the backside, would have caught the average quarterback. Allen simply was too fast for him.

Tricked by the fake jet sweep. The blocking was textbook-good on Singletary’s 14-yard touchdown run in the second quarter.

Once again, Smith sealed the edge – this time on the left side with a block on Ximines. Connelly, the Giants’ linebacker to the play side, was forced to shift a yard away from the play before the snap by a jet-sweep motion by Isaiah McKenzie. That was just enough to allow Nsekhe to make the key block on the play, diving into Connelly’s thigh and spilling him to the ground.

On the front side, Morse made it look easy, pulling to take out the cornerback, Baker. Guard Quinton Spain pulled to block safety Jabrill Peppers.

It was a case of fooling the young Giants’ defenders. Ximines, the late third-round pick from Old Dominion, was playing defensive end over the left tackle. He took a false step inside while watching the Bills’ offensive linemen fire off to the right. Oops. McKenzie was zooming across his face to the left, and Ximines had no chance to catch him.

Meanwhile, tight end Dawson Knox had Peppers, the only defender on the edge, on roller skates. Knox drove Peppers backward 10 full yards into the end zone. That will be a fun play for the Bills’ tight-end room to watch on Monday.

It was the first touchdown catch of McKenzie’s career, and he might never get another one as easy. Nobody laid a glove on him.

The Bills were 4 for 4 in scoring touchdowns once they got in the red zone, and they’re now 5 for 5 on the season. They would not have scored a TD in the fourth quarter if the Giants’ Dexter Lawrence hadn’t committed an unnecessary roughness penalty.

Still, Daboll is giving defensive coaches a lot to worry about with his use of Allen as a rushing weapon and all his misdirection near the goal line.