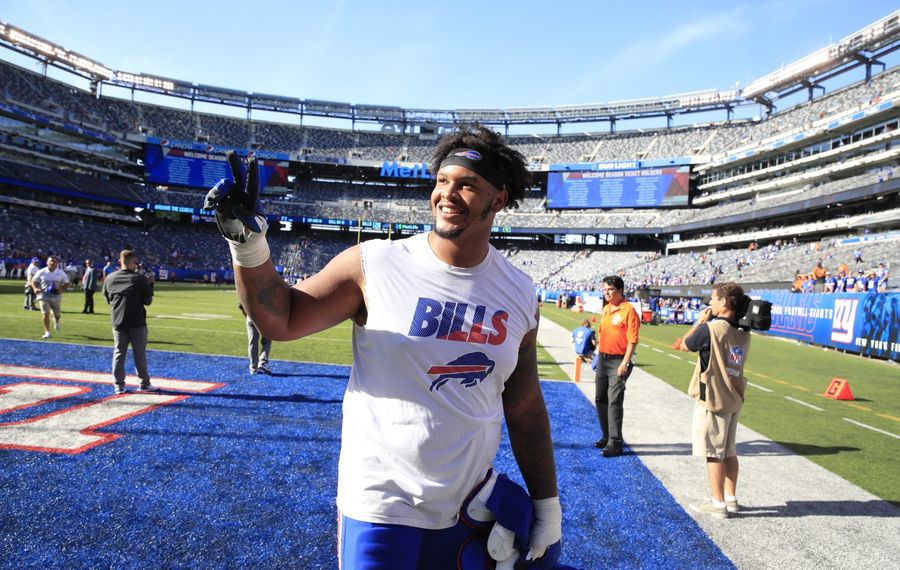 It was bad enough that quarterback Josh Allen was hit, perhaps a split-second late, after throwing the ball away on third down.

But when New York Giants linebacker Lorenzo Carter stood there, towering over the Bills’ young franchise quarterback, who had led Buffalo to three consecutive touchdown drives, it was offensive lineman Ford who delivered a shot, and a message, decking Carter with 1:38 remaining in the first half of the Bills’ 28-14 victory Sunday at MetLife Stadium.

“We all got each other’s backs, so the message is going to be sent that you mess with one of us, you’ve got to mess with all of us,” Ford said. “And that’s what we’ve built here, is a brotherhood.”

By winning back-to-back road games to begin a season for the first time in franchise history, the Bills have similarly sent a message to the rest of the league: The only NFL team that actually plays its games in New York is to be taken seriously.

Yes, we’re talking about victories against the New York Jets and Giants, not exactly the cream of the crop.

But here are the facts:

The Bills beat a division rival on the road in Week 1, rallying from a 16-0 second-half deficit.

And in Week 2, they beat a team they were supposed to beat, long far from a given with this franchise.

“It’s huge. You want to start banking games early in the season because you know late in the year it definitely pays dividends when you get into November, December, when you start playing for playoff spots,” linebacker Lorenzo Alexander said.

“And you don’t want to be playing from behind and feel like you have to win every single game. You want to be sitting in an advantageous spot to where hopefully you’re playing for maybe home field or the division, and these early games that sometimes people kind of disregard, can come back and bite you, so it’s huge. Even though it’s a nondivision, nonconference game, it’s huge as far as what we want to do as we move along in the season.”

Yes, we’re two games into the season and one of the team’s most experienced players is talking playoffs.

But here’s the thing – he’s not wrong. And that wasn’t the end of the conversation.

The Bills are 2-0 for the first time since 2014. But while the perception of some football fans might change, Alexander and the rest of the veterans in the Buffalo locker room understand they haven’t accomplished much. Not yet.

Buffalo started 2-0 in 16 previous seasons, the best of which culminated with AFL championships in 1964 and '65 and three Super Bowl appearances. But after winning their first two games, the Bills also missed the playoffs seven times, including all five times since 2000.

That 2014 season, which opened with victories against the Bears and Dolphins, ended with a 9-7 record. It was the only time since the turn of the century that the Bills opened 2-0 and then finished with a winning mark.

It’s critical that the Bills’ young players heed that message.

“The veterans, we’re not going to let them get comfortable,” running back Frank Gore said. “We have different veterans in different rooms who have been around and did great things and know what it takes. As long as we just keep working like our coach always preaches and just come out and play together like we did today and last week, anything can happen.”

The Bills, like most teams, have issues they’re working to clean up.

They had four turnovers against the Jets, but none against the Giants, an obvious step in the right direction. Ball security remains paramount.

But so does third-down efficiency. Though they pieced together four long and impressive touchdown drives Sunday, which is not to be minimized, they converted just 5 of 13 third downs.

Unnecessary penalties also are an issue. They had nine flags for 65 yards against the Giants, after committing seven for 55 a week earlier.

Ford, the Bills’ rookie right tackle and second-round pick, was flagged by every official in sight when he went after Carter, his 15-yard penalty for unnecessary roughness giving the Bills fourth-and-18 at the Buffalo 30. He said he knows he shouldn’t have committed that penalty, that he has to be smarter than to cost his team field position.

But it wasn’t the worst time to send a message. And it was appreciated by his quarterback.

“He's the man,” Allen said. “I appreciate what he did for me there and have guys that stick up for you. Coach can say it was a bad penalty and it kind of put us back, but as a quarterback, I love it when linemen kind of stick up for you. So I'll take care of him.”

That field position led to a booming 63-yard punt by Corey Bojorquez, who out-kicked the coverage. T.J. Jones returned it 60 yards to the Buffalo 33.

But the Bills’ defense, protecting a 21-7 lead, once again rose to the challenge. Rookie defensive tackle Ed Oliver, the team’s first-round pick, tipped an Eli Manning pass that was intercepted by defensive end Trent Murphy.

“That’s what makes this team great. We play off each other,” receiver Cole Beasley said. “Where we’re slacking in one area, the other one picks up, so that’s part of being a good football team and that’s part of the foundation that (coach Sean) McDermott set and just having your brother’s back. We take pride in that.”

After a lull in the second half – it was a one-score game with 12 minutes remaining in the fourth quarter – the Bills were able to put the Giants away.

The winless Cincinnati Bengals are on deck for the Bills’ home opener Sunday at New Era Field. It’s another game the Bills ought to win.

And there might be an inclination, for some, to look ahead to the New England Patriots in Week 4.

“We’re 2-0. Let’s not get ahead of ourselves,” safety Micah Hyde said. “We understand that we’ve got a lot of work to do. I’ve been on some good football teams that, toward the end of the season, you go out there and it’s like, ‘Yo, we’re going to win this game. How much are we going to win it by?’ But I’m not saying we’re anywhere near there yet. We have a lot of work to do before we get to that.

“You’ve got to be able to play good going into December to kind of have that mindset. We’re just grinding each and every day. We understand our home opener is coming up. We can’t wait to get back in front of our home crowd.”

“I don’t think that we accomplished anything,” Dawkins said. “We’re just a team that’s fighting for that next play, that next step, that next win. After we leave this locker room, this win means nothing. We have another team ahead of us. We just have to focus on what’s next.”

Bills do exactly what they were supposed to do vs. weaker Giants