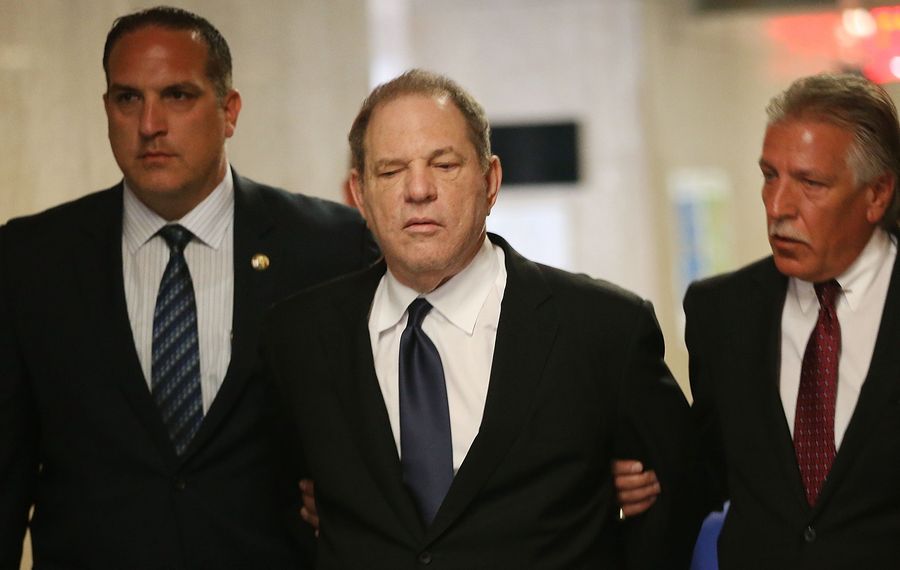 Leave it to Stephen Colbert.

No one comes up with better commercial sound bytes than a late-night talk show host who needs to explain why those watching at home need to stay tuned for 10 more minutes and pay attention before bidding the world goodnight.

So earlier this week, as he was about to interview Pulitzer Prize-winning New York Times reporters Jodi Kantor and Megan Twohey, he perfectly tossed off a capsule description of what their new book, "She Said," was clearly intended to be – an "All the President's Men" for the #MeToo movement.

It won't sell quite as many books. As Colbert joked, there won't be a role for Robert Redford in the movie version.

You've got to give Kantor and Twohey credit for one thing: It's a great title, a brilliant ironic way of turning upside down one of the dumber and more puerile jokes of male puberty (to be used as often as possible in a suggestive context).

But "She Said" winds up, I think, to be a small and narrow and awkward if compelling book about one of the two biggest subjects of our era. (The other major subject of our era is 2016's "Alice in Wonderland" plunge of the entire American political system through the looking glass into a place where down is up and up is down.)

Kantor and Twohey are the New York Times reporters who broke the behind-the-scenes story of one of the most outrageous brutes in all of American media and entertainment – Harvey Weinstein, co-founder of Miramax Films and Weinstein Films, epochal producer and inventor of the indie film revolution in America and the man behind some of America's and the world's best movies of the past 20 years. In his prime, he was, in addition, the unconquerable field marshal of the annual Hollywood Oscar fest.

He was the bloated figure who had one of the most prominent seats at the Oscars when host Ellen DeGeneres playfully made the joke purchase of pizzas for the audience. When it was time to pay and tip the delivery kid, DeGeneres immediately went to "Harvey" for the money ( by then, everyone in Hollywood referred to him familiarly as "Harvey," almost the way the world refers to "Cher" or "Elvis" or "O.J.").

There, for all of America to see, was the perfect Harvey Weinstein role – the overweight, carelessly groomed megabucks producer who could always be counted on to carry enough dough to deal with emergencies and who had the clout to make sure every problem was smoothed over and handled unproblematically. Never mind that such "clout" looked often like bullying when seen "up close and personal."

At the same time "Harvey" had become a living inhabitant of the world of myth and fable, he was also known, throughout the world of American entertainment, as an abuser, debaucher and befouler in ways large and small, of women.

We Americans have been hearing tales of Hollywood's "casting couch" ever since the country's "movie capital" was invented. What the women of show business were living with in Weinstein's case was more than a "casting couch." It seemed to be serial sexual abuse as a way of life.

He's said to have gotten his start doing it in Buffalo when he was one half of the rock promotional team of Harvey and Corky.

I, too, called Harvey "Harvey." My familiarity was distant, but genuine. I've known him for about 50 years. Despite what was commonly assumed by people who have no idea how firmly compartmentalized so many lives are, I never knew anything about the sexual rapacity that, in so many eyes, made him a virtual poster boy for depredation.

To me, Weinstein was just a guy on the make back then – a guy always looking for anything he could get wherever he could get it. I had no idea whatsoever that for actresses and female co-workers that involved constant physical and emotional abuse.

I only saw the part of him, I could, for so many years assume to be, on the whole, good for movies, for America, for Buffalo and for me, personally.

Make no mistake: Weinstein got me interviews – not just the one-on-one with Madonna that half of America's press wanted at the time, but also a telephone interview with an interpreter with one of the master filmmakers of the world, Nikita Mikhalkov. Weinstein always made sure our publication saw all of his film releases early.

I was always wary of Weinstein's crudity and thuggishness – as was every other critic I ever knew – but I had no trouble finding things to like about his brutal persona.

My view of him was not only limited, but was carefully designed to be that way through the efforts of many people and through the constant application of a ton of money.

It was Kantor and Twohey who broke through that wall of people and money and got the story first that immediately sent America into the wholesale reckoning for sexual abuse that has affected America both visibly and invisibly since.

They weren't first to start looking around. Weinstein was a major project of other journalists sniffing around for years – Ronan Farrow, Ken Auletta. He was, for so many, the movie tale that most needed to be told.

What must be understood is that critics are no more automatically privy to the grungiest realities of backstage life than passengers in a taxi are privy to the tire pressure, oil level and wheel alignment of the cab they're taking to the airport (not to mention their driver's safety record and his mood since he woke up that morning).

Kantor and Twohey didn't break the Weinstein story first. #MeToo began, if anywhere, with one of the most revered and beloved and wealthy men in the history of entertainment – Bill Cosby.

No one in America was ever more beloved in his prime than Cosby. He's behind bars now. It was all started by a fellow comedian named Hannibal Buress, who was clearly fed up to here with Cosby's self-righteous and constant lectures to young black people about behavioral matters when Cosby's own life was so full of allegations of misconduct and worse.

With Cosby so shaky, any depredation by Weinstein could almost be thought of as a minor subject, however powerful he was behind the scenes.

Except they weren't. They were the dam-busters that finally broke everything else open.

All manner of people, places and businesses are recalibrating men and women together. The #MeToo hurricane washed out to sea people one might well have assumed to be held in place by cement – everyone from Fox News' Roger Ailes and Bill O'Reilly to CBS' Les Moonves and Charlie Rose to Matt Lauer to Kevin Spacey to celebrity chef Mario Batali.

A sitting senator – Al Franken – was washed out by the tide, resulting in the New Yorker questioning the precipitousness of his disappearance as judged against the severity of his offenses.

Kantor and Twohey are under no delusion that major explosion of the dam holding back major stories American sexual abuse has been nothing but simple or even fortuitous.

They are wise enough to write that after they broke the Weinstein story in the Times, they "stumbled trying to explain that the paper was overwhelmed with stories of abuse, that not all could be told and that even the nation's most powerful publications could not bear the entire weight of the reckoning. Journalists had stepped in when the system had failed, but that wasn't a permanent solution.

"In a way those who felt #MeToo had not gone far enough and those who protested that it was going too far were saying some of the same things. There was a lack of process or clear enough rules. The public did not fully agree on the precise meaning of words like 'harassment' or 'assault,' let alone how businesses or schools should investigate or punish them. Everyone ... seemed to be struggling to devise their own new guidelines, which made for fascinating conversation, but also a kind of overall chaos. It was not clear how the country would even agree on effective new standards or resolve the ocean of outstanding complaints."

Does anyone mind if I raise my hand in the back row and offer that at this moment that is the book someone desperately needed to write, not just an "All the President's Men" of the #MeToo movement for the best seller list?

Let me admit as hastily as possible that Kantor and Twohey's book will be riveting for journalists and anyone else who followed the Weinstein investigation as it unspooled (at the moment, his New York City trial on evolved charges is scheduled for January).

If you were among those of us who guessed all along that Weinstein's brother Bob and Gwyneth Paltrow – at one time known as "The First Lady of Miramax" – were covertly involved in their investigations, you have confirmation from Kantor and Twohey.

Paltrow not only told them former boyfriend Brad Pitt confronted Weinstein physically over his foul behavior with her, she provided Hollywood introductions of actresses to the reporters and even allowed her house to be used for reporters to hold meetings.

Weinstein's brother Bob – who was clearly perturbed by the amount of hush money his brother's excesses entailed – could only be joined at his brother's hip for so long. After a while, we're treated to the tale of an out of control Harvey punching his brother in the face. Which is followed by a long, wrenching email from Bob to his brother.

The worst abuse I have taken from anyone I covered I took from Weinstein. He once vented on the subject of my personal worthlessness, my newspaper's worthlessness and the city I lived in and from which he'd depart as soon as possible.

I had no trouble believing the guy on the other end of that phone slugged his own brother in front of co-workers years later.

After obscenely lambasting me, my newspaper, and my city, Weinstein informed me that, of course, everything he'd just said to me was "off the record" and never to be mentioned.

At that point, I imparted an obscenity of my own and explained that "off the record" doesn't work like that. It's a deal one makes before intemperate explosions of violent temper, not after when there's blood on the floor.

All through "She Said," Weinstein keeps wanting to hide in a whole secret life behind a curtain emblazoned with the words "off the record."

Kantor and Twohey were the first to put Weinstein's secret life "on the record."

Where it's going to stay.

I can't tell you how much I wish America were still the land where truly great writers dealt with epochal issues of the day.

Until – or unless – Joyce Carol Oates gets around to it, we'll just have to make do until the next journalistic wave with this clumsy, but compelling, attempt to create an "All the President's Men" for the #MeToo movement.