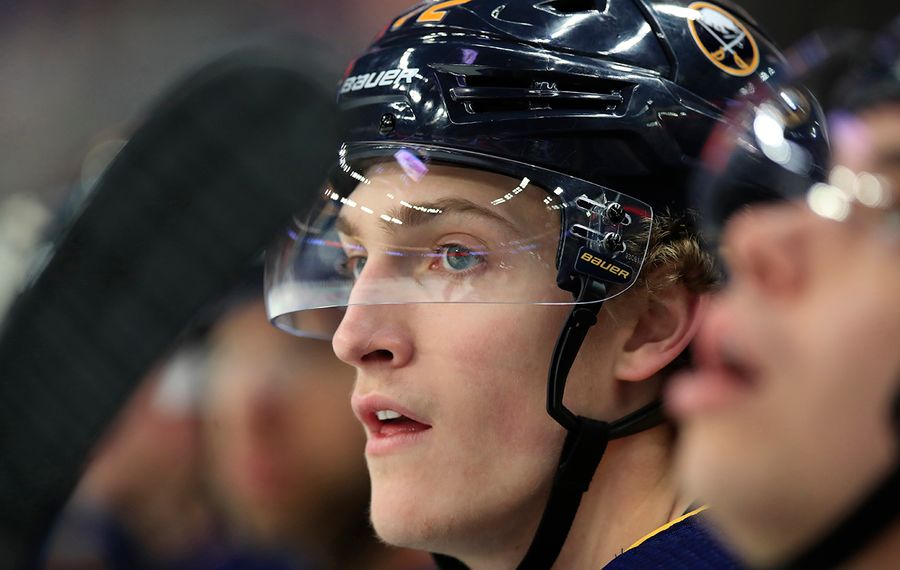 The plan to try to transform Tage Thompson from a raw, lanky winger into an imposing power forward began at a Whole Foods in Milford, Conn.

Thompson, 21, was not eating unhealthy prior to this offseason, but he had trouble adding weight to his 6-foot-6 frame. So, he elicited the help of his trainer, Pete Pulaski, who joined Thompson for weekly trips to the grocery store. After purchasing a haul that often included grass-fed beef, chicken, fish and rice, Thompson would return to his home to cook and package a six-meal-a-day diet for the week ahead.

"It was a chore," Thompson told The Buffalo News following practice Friday. "It wasn't really fun because you have to force yourself to eat, even when you're not hungry. It was tough, but it was obviously worth it."

Pulaski instructed Thompson to consume anywhere from 3,000-5,000 calories per day, depending on the intensity of workouts. Though eating became an arduous task, Thompson is elated with the results early in Buffalo Sabres training camp. He weighs 216 pounds, an increase of 13 from one year ago, and lost one percent of body fat.

Thompson feels stronger, particularly in his lower body, and better prepared for the grind of an NHL season. But will it be enough for him to earn a roster spot under new coach Ralph Krueger?

"It’s going to be a challenge," Thompson acknowledged. "There are a lot of talented players here. My goal is to make the team and do whatever I can to help them be successful."

The disappointment of last season still doesn't sit well with Thompson. He failed to score in the Sabres' first 15 games and in his final 23 games before being demoted to Rochester on March 28. After beating out Alexander Nylander for a roster spot in training camp, Thompson finished with only seven goals among 12 points with a minus-22 rating in 65 games for Buffalo.

Though Thompson struggled with the nuances required to succeed in the NHL, Sabres General Manager Jason Botterill chose to keep the former first-round draft pick on the roster for much of the season because Thompson routinely flashed his potential in practices and games.

The breakout did not come until Thompson was given a prominent role with the Amerks. He scored six goals among nine points in eight regular-season games and added two goals in three games during their first-round playoff loss to Toronto. Thompson did not imagine he'd eventually be sent back to the American Hockey League after making the Sabres out of camp.

However, his time in Rochester reminded him what he can accomplish on the ice.

"I did have chances every game," Thompson said, reflecting on his time with the Sabres last season. "When they’re not going in you get down on yourself and frustrated. When that happens you can start to put unneeded pressure on yourself. I let that get to me and it affected my game.  Maybe if I put one or two in and got into a little bit of a groove things would have worked out differently. When you’re not putting pucks into the net you have to be able to help your team in other ways, playing well defensively and in the neutral zone. ... I think that stint in Rochester gave me confidence back, and I’m excited for this year."

Pulaski built an offseason workout regimen for Thompson by watching each of his client's games with the Sabres last season. Pulaski, who owns Pulaski Strength Academy in Bridgeport, noticed Thompson struggled when battling with opponents for a loose puck or trying to out-muscle someone in front of the net.

Thompson's size is one of the many attributes that led the Sabres to acquire him in the Ryan O'Reilly trade, however, he had trouble using that to his advantage since he lacked the necessary lower-body strength. As a result, Pulaski created a workout regimen that included squats, power cleans and various single-leg workouts.

"For him, the lower-body emphasis is he’s so tall that it looked like he could have a better burst at times," Pulaski said in a phone interview. "He could have more contract with the ice when he’s driving to the net, pushing guys around. He should be a force to be reckoned, so we wanted to take that into consideration with strengthening his lower half. He could be better on the puck, battle for it, drive to the net harder. He has the speed, he has the intangibles to be a dominant player in the NHL. Now it’s putting together the pieces."

Most of Thompson's workouts were off the ice until July, but he impressed the Sabres with his performance during prospect development camp in June. In addition to his exceptional play on the ice, Thompson showed an ability to lead younger players, which earned him the team's Craig Ramsay Leadership Award.

The arrival of Krueger provides a clean slate for Thompson, but he may face long odds to make the Sabres' roster. There are 27 other forwards in camp, many of whom have a realistic chance of being in the lineup when the season opens Oct. 3 in Pittsburgh.

Aside from offering praise for Thompson's fitness, Krueger had little to say when asked about his early impressions of the intriguing prospect. However, Thompson's teammates are interested to see how more weight and strength could translate on the ice when the six-game preseason schedule begins Monday at Penn State University.

"Tage is an interesting one because when you see him in practice it’s like a highlight reel," Sabres winger Conor Sheary said. "He’s always beating defenders, and he’s got a heavy shot. I think if he can translate that into his game a lot more I think he can be an effective player. He was a first-rounder for a reason. He was in our locker room for a reason. I think as a younger guy you get in a rut and it’s hard to get out of it. ... A big guy like that if you’re strong and can’t get knocked off the puck it’s an effective game."