It was just five years ago that his century-old hot dog company thought it had found the next big thing: a low-fat hot dog called Duetts that would appeal to increasingly health conscious consumers and put the Peckham Street company on the national map.

Back then, the company came up with a bangers-and-mash type of sausage with potatoes inside.

Everybody loves sausage with potatoes inside, right?

It turns out, they didn't.

Duetts didn't take off, but Wardynski still believed it was on to something. In doing so, the company stumbled upon and perfected a formula that greatly reduces fat, sodium and the need for undesirable added ingredients when paired with protein.

Now, Wardynski & Sons has formed a new company – Botaniline – that will use the same technology to help food manufacturers ride the clean eating craze and help them eliminate the fillers and additives that label-conscious consumers are increasingly trying to avoid.

If it works, it could do what they thought the Duetts line would do for them from the beginning: Broaden its product line and help the company go national.

It all started five years ago, when Wardynski food scientist Dean O'Brien was brainstorming flavor combinations for a new product line and came up with that take on England's bangers and mash.

He experimented over and over again with the potatoes to get the proper texture and consistency in the sausage. As he did, he and owner Skip Wardynski noticed something about the nutrition information that came back with those test batches.

"All the numbers were dropping," said Wardynski, the company's third-generation owner. "The sodium levels, the fat. The bad stuff was going lower and lower."

O'Brien eventually got the fat content down by 40%, and it still tasted great. 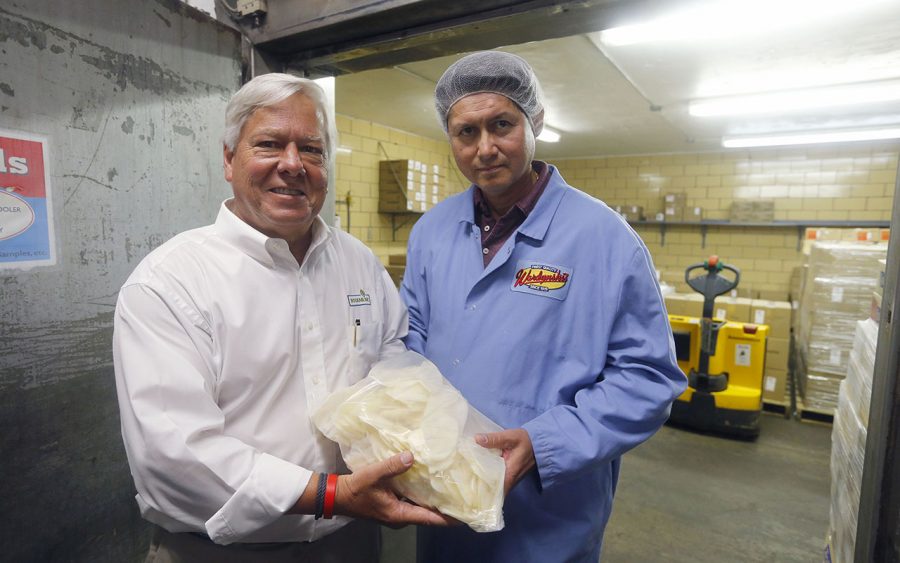 The company believed this breakthrough low-fat sausage would be what finally took the Wardynski name national. With Duetts offering a much lower-fat alternative to national competitors' products, Wardynski meats – beloved in Buffalo, but unknown elsewhere – would finally be stocked in supermarkets around the country.

That didn't happen, perhaps because the sausage was marketed as low-fat, and consumers were burned out from the low-fat craze of the 1990s.

But while Duetts were a dud, it was clear to Wardynski that O'Brien was on to something.

He believed the food technology O'Brien discovered in developing that special sausage was capable of a lot more.  So much more that O'Brien and Wardynski joined with former hospital executive Mark Celmer to form Botaniline, a plant-based food ingredient technology spin-off company that hopes to attract label-conscious shoppers who follow the so-called "clean eating" lifestyle.

That's because the technology O'Brien developed lets Botaniline make foods without the binders, fillers and additives that give food its consistency, texture and taste – and which clean eaters avoid. Botaniline helps manufacturers wipe those undesirable additives and chemicals from its ingredients list and capitalize on today's more health-conscious consumers.

At the center of it all is a specially treated potato dubbed "O'Brien's Best," which acts like a magic eraser on the bad parts of nutrition labels. Mix O'Brien's Best potatoes with any protein, either animal or vegetable, and it will boost protein levels, reduce saturated fat and calories, and cut sodium by as much as 90%. It also eliminates the need for fillers, binders and additives, which add unwanted ingredients.

That makes for the cleaner labels today's consumers crave.

And Botaniline puts Wardynski, a century-old Peckham Street hot dog maker at the forefront of the food industry's biggest trends – sustainable, plant-based, clean eating – as it heads into its second century.

Essentially, Botaniline works with food manufacturers and suppliers to help them create cleaner, healthier, allergen-free versions of their products, or come up with new product lines altogether.

So far, it's under contract with more than 80 food companies that are testing Botaniline's technology, Celmer said. 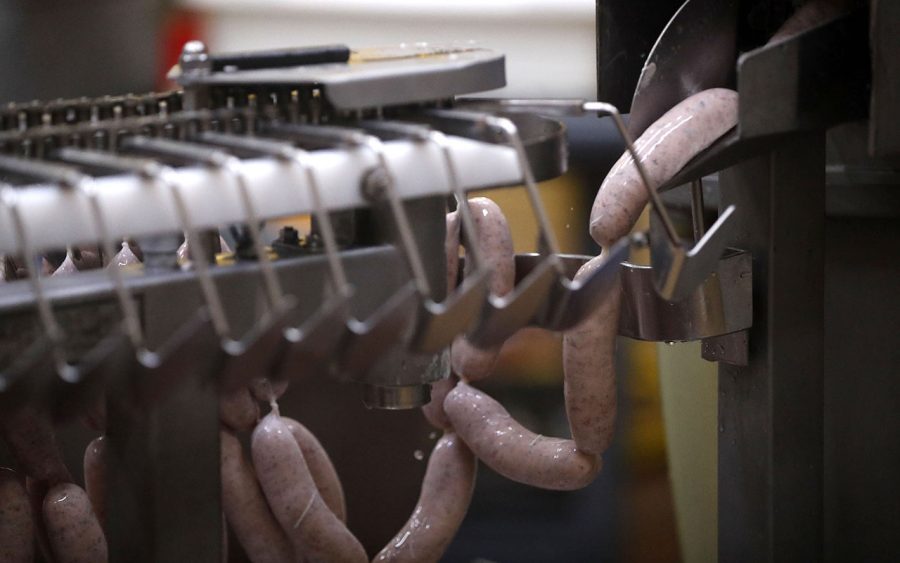 Sausage made with Botaniline is made at Wardynski & Sons. (Mark Mulville/Buffalo News)

Eliminating those binders, fillers and additives gives Botaniline an entry point into the growing allergen-free market, too.

Milk and eggs are common food binders. They're also the two most common food allergens. Textured vegetable protein, though vegan, contains soy, another allergen. A number of additives and fillers contain things like gluten and MSG that can cause problems for people sensitive to them. Cutting that stuff out makes those food products safe for those with allergies and intolerances.

Botaniline has also unveiled another of O'Brien's plant-based creations, called Pea-Nutless Butter, an allergen-free peanut butter substitute geared toward the growing segment of the population with life-threatening peanut and tree nut allergies.

It's lower in fat, sugar and calories than peanut butter, and it's gluten-free and vegan. Where peanut butter has 140 milligrams of sodium, Pea-Nutless Butter has 2 milligrams. It's marketed to big food makers who can use it as an ingredient in things like cookies, ice cream and candy.

Botaniline calls itself a "mature early-stage company," with its patented invention, its more than 100 recipes and relationships with 60 national manufacturers. But it still needs investors, and is looking for about $1.8 million in seed money. They have sold about 16% of the company to investors so far to raise cash.

Because of its nutritional selling points, the company sees applications for consumers with diabetes, kidney disease, obesity and high blood pressure. It is making inroads with hospitals, long-term care facilities, schools, the military and correctional facilities. It sees a future with pet care, food service and straight-to-consumer products.

There hasn't been a hot dog on cafeteria menus in the Buffalo Public Schools since 2012. Though hot dogs are a kid favorite, they don't meet government nutrition guidelines. The district tried introducing turkey hot dogs, but kids didn't like the way they tasted and ended up throwing them out.

The nutrition panel on Wardynski's beef hot dog with Botaniline exceeds federal labeling standards. It also got the thumbs-up from student taste testers in June. As a result, Wardynski will provide hot dogs to the Buffalo Public Schools twice a month – amounting to 60,000 units each month.

As a bonus, schools receive additional reimbursement from the state because Wardynski uses beef grown in New York State, and the hot dogs are processed in Western New York. The hot dogs also are less expensive, because the less costly potato takes up space in each hot dog that would've been occupied by higher-priced beef. 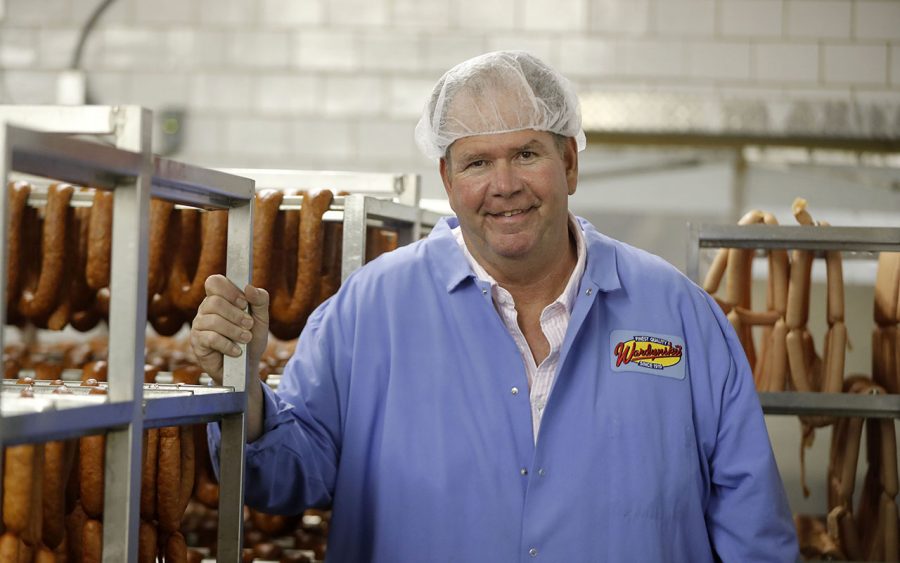 The O'Brien's Best patented potato is cut a certain way and cooked at just the right temperature for just the right time. How that's done is Botaniline's most valuable trade secret.

Before chefs cook steaks, they salt them. The salt acts as a binder, breaks down the muscle fibers and concentrates the taste. With O'Brien's Best, the naturally salty potato does the same, pulling the protein out of the muscle. The protein encapsulates the fat and holds onto the water, which keeps the flavor, fat and juiciness from leaking out in the form of grease. So, even though there is naturally less fat in the food, what's there stays in and retains its flavor.

For all its binding abilities, O'Brien's Best is still just a potato. That means it can be listed on the ingredient label as such – not a binder or some unpronounceable word a consumer has never heard of.

Usually when a company takes the fat or sodium out of a product, it has to fill it back up with all kinds of other additives and chemicals to get the flavor back. O'Brien's Best helps proteins retain their flavor so nutrition panels come out looking a lot cleaner.

The hot dog Wardynski replaced at Buffalo Public Schools, for example, contained 14 ingredients including hydrolyzed beef stock and sorbitol, which can cause stomach cramps and headaches in people with intolerances.

Wardynski's hot dog has seven ingredients, and the first three are beef, water and potato. Even the Beyond Burger, a popular vegetarian and vegan alternative to beef burgers, has 21 ingredients –  including methyl cellulose, a nondigestible wood pulp that spooks many clean eaters.

Botaniline said manufacturers and suppliers can choose which aspect of their products they want to highlight: low-fat, plant-based, low-sodium, heart healthy, allergen-free, gluten-free or any of the other characteristics it sees a market for. Or, it can simply let the label speak for itself.

"We want people to see where our ingredients stack up," Wardynski said.