So when he spoke on a conference call to the Buffalo media in July after the Sabres acquired him from the Vegas Golden Knights, it was more than understandable to hear a voice that was a tad downcast at the other end of the line.

Vegas, of course, went to the Stanley Cup final in its amazing 2018 inaugural playoff run and could have gone a long way again last spring were it not for the disaster of Game 7 of the first round in San Jose.

You remember that one. A 3-0 lead in the third period with the series just about locked away. A brutal major penalty call on Cody Eakin and four sudden power-play goals from the Sharks. A last-minute tying goal by Vegas' Jonathan Marchessault. And, finally, an overtime winner by San Jose's Barclay Goodrow.

Game over. Season over.

"It stinks. Nobody likes losing, especially with how tough it is to make the playoffs," Miller told The Buffalo News after Friday's opening of training camp practices in KeyBank Center. "I want to put that in the back of my mind now. You move on from those things throughout the summer. I'm past it and excited to be here in Buffalo, excited to try to build something special here."

Miller, 26, isn't getting another chance on the Vegas defense. Instead, he figures to be a stalwart on the Buffalo blueline. That's because the brutal loss was followed by the cold reality of NHL business.

Miller was a salary-cap casualty in Vegas a year after signing a four-year, $15.5-million deal with the Golden Knights. Among fellow Sabres newcomers, Marcus Johansson chose to be in Buffalo by signing a two-year deal in free agency and Jimmy Vesey was more than fine with his trade from New York so he could play with close friend Jack Eichel.

Miller, however, was the subject of a shock-to-the-system trade.

New coach Ralph Krueger's initial conversations with Miller revolved around the fact that Miller's parents could now make eight-hour drives to Buffalo from Sault Ste. Marie, Ont., to see his games. Obviously, that wasn't an option when Miller played in Vegas.

"He loved what he experienced in Vegas and we respect that but he also sees the opportunity to be a leader here and to bring that experience into this lineup," Krueger said. "I've had nothing but positive contacts with him. He's come in here with his head held high, his shoulders straight and I see nothing but an embracing of being a Buffalo Sabre."

"He welcomed me and I was excited to get to know him and build a relationship with all the coaches and all the guys here," Miller said. "It's an exciting time to start the season with some new faces in here and a good core of young guys." 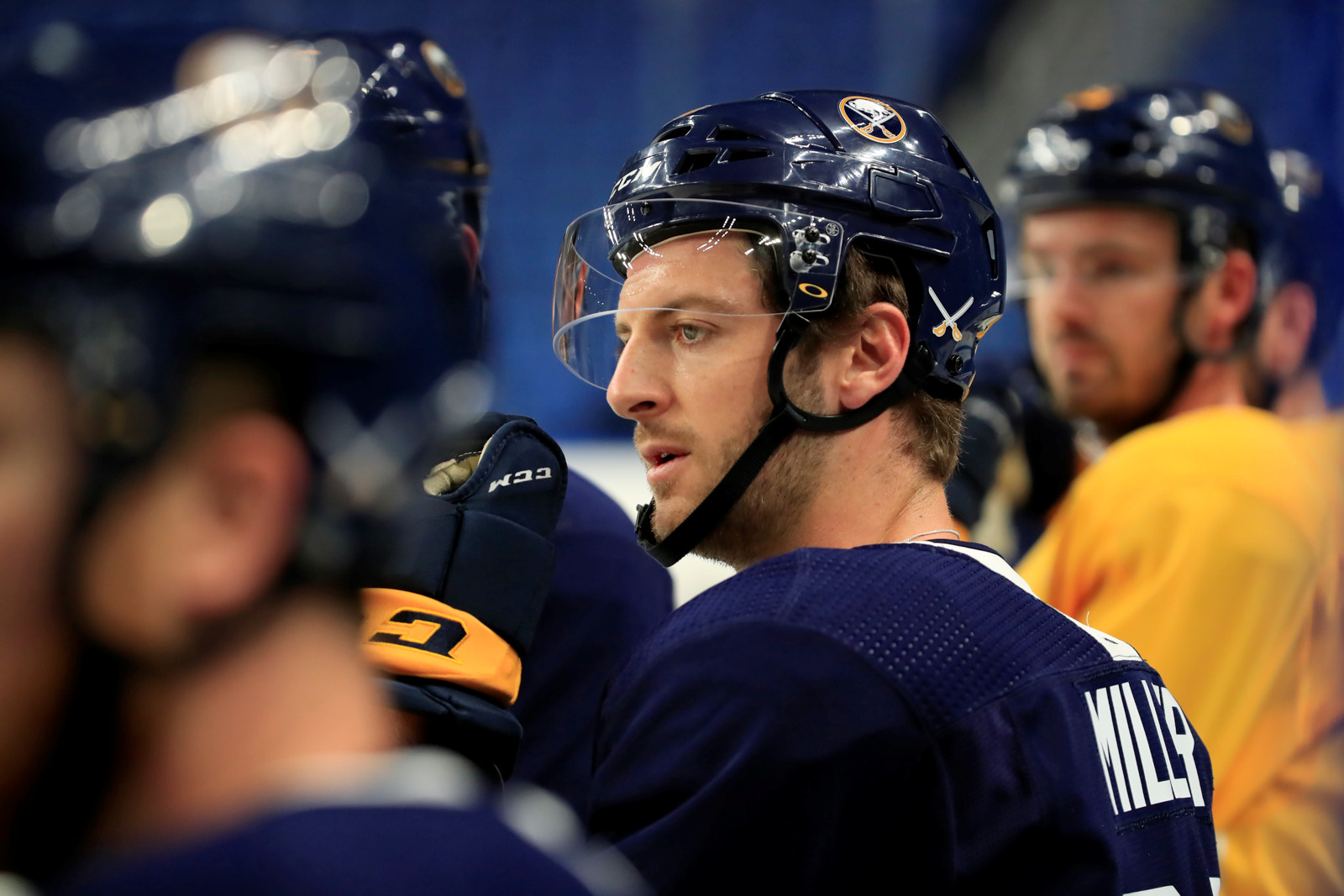 Colin Miller on Stanley Cup runs: "It's a lot of work to get there, a lot of work that requires guys to be on the same page." (Harry Scull Jr./Buffalo News).

Miller is listed at 6-foot-1 and 196 pounds. The Sabres needed an upgrade in the skating and passing areas on their back end and Miller certainly gives them that.

Miller had 10 goals and 31 assists in Vegas' inaugural season, compiling 17 of his 41 points on the power play. He averaged 19 minutes, 21 seconds per game in the regular season and scored Vegas' first goal in the Cup final against Washington.

Miller also registered 64 blocked shots each of the last two years and his hit totals were 165 and 122, respectively. His career Corsi rating is 56.7 percent.

These are not the figures we're used to seeing from Buffalo defensemen.

In addition, most Sabres have never seen a playoff game without a ticket or a television set. Johansson has played in 94 of them in his career with Washington, New Jersey and Boston. Miller has been in 26 the last two years in Vegas. Each has been in the Cup final in that time as well, albeit on the losing side. The lessons run deep.

"It's a lot of work to get there, a lot of work that requires guys to be on the same page," Miller said. "That's what it takes. It's a fine line between winning and losing in this league -- and sometimes you can do all the right things and still fall short as you saw. The amount of work and committment that it takes from 20 guys is something you learn."

When Vegas had its cap crunch, Sabres GM Jason Botterill pounced on the opportunity. Botterill has taken some well-deserved hits in his time here but acquiring a top-4 defenseman almost certain to play 20+ minutes a night for just a second- and fifth-round pick appears on paper to be a great roll of Botterill's dice.

"I had excitement when you saw what this team did last year with their great run (over the first 25 games of the season)," Miller said. "It's in this room and I think it's just a matter of putting it together and being able to execute for 82 games. I'm excited to be a part of it here."

Miller said Vegas' Cup run was a product of confidence, from the understanding this was no longer an expansion team to the reality that a deep playoff run was, in fact, possible.

"At the beginning of the year, it was surprising to us too," he said. "But as the season went on, our confidence grew and we really quickly saw what kind of a team we could be."

It will be interesting to see how the Sabres take to what Krueger wants them to be, and how they react when times get tough. The honeymoon phase between players and coach right now is quite high, given the disdain many occupants of the locker room had for Dan Bylsma and the indifference shown toward Phil Housley.

Krueger is 60 years old. He's got as interesting a resume as you'll see for an NHL head coach -- without a whole lot of NHL experience. This isn't Joel Quenneville showing up in Florida or Todd McLellan taking over in Los Angeles. Those are known commodities.

"I don't think there will be too much of a learning process," Miller said. "He's the coach and obviously there's respect that goes both ways and it's like that with any coach. He's got some great ideas and he has been around hockey for so long, so I'm excited to learn from him."

Players in Buffalo's locker room will probably learn a few things from Miller too. He's got the recent experience so many of them should pay attention to.