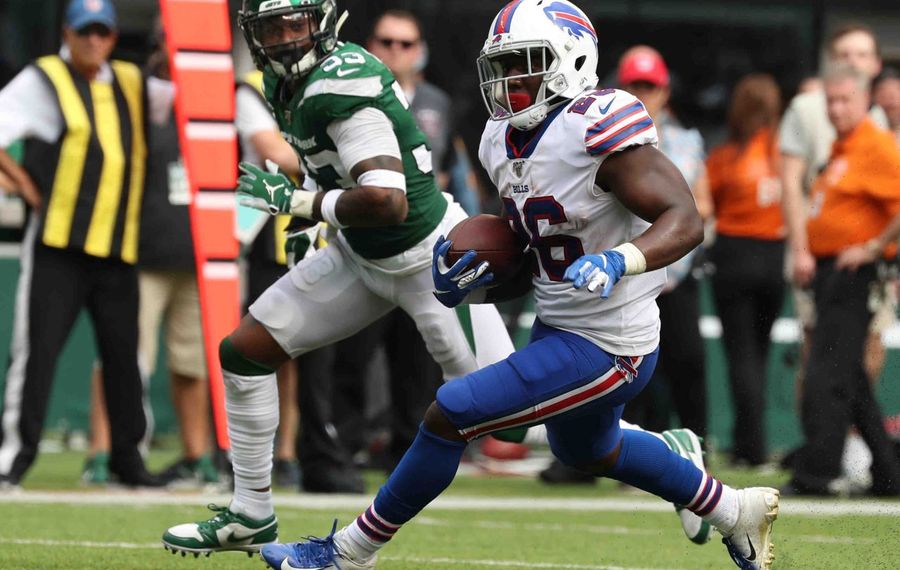 The Bills travel to MetLife Stadium for a second consecutive game, this time to face the New York Giants on Sunday at 1 p.m.

When the Bills run: Give. Devin. Singletary. The. Ball. More. After he ran for 70 yards on four carries against the Jets, it’s clear the Bills’ prized rookie running back can produce at the NFL level. Coach Sean McDermott said Wednesday that Frank Gore is his No. 1 running back, but that shouldn’t come at the expense of Singletary’s playing time. There wasn’t much room for Gore against the Jets, who have a stout defensive interior. Third running back T.J. Yeldon took just two offensive snaps in the season opener. EDGE: Bills.

When the Bills pass: That’s something they did early and often in Week 1 — throwing or attempting to on 17 consecutive plays to start the game. Because of turnovers, the results were decidedly mixed, but putting Josh Allen in that position is something a team asks a franchise quarterback to do. Allen showed improved accuracy against the Jets, completing 64.9% of his passes. The emergence of John Brown as a potential No. 1 receiver was one of the big positives to emerge. Brown’s 123-yard performance was the most by a Bills receiver since Sammy Watkins had 154 on Christmas Eve in 2016. How bad was the Giants’ secondary? According to analytics website Pro Football Focus, DeAndre Baker, Antonio Hamilton, Grant Haley, Antoine Bethea and Jabrill Peppers allowed 16 catches on 16 targets in Week 1 against the Cowboys. EDGE: Bills.

When the Giants run: Look out. Saquon Barkley is one of the best players in the NFL, and will be a supreme challenge for the Bills’ run defense. He ripped off 120 yards on just 11 carries last week. Barkley gained 76 yards off edge runs in Week 1, so he’ll test the sideline-to-sideline ability of the Bills’ defense, particularly linebackers Tremaine Edmunds and Matt Milano. Buffalo did a good job limiting Le’Veon Bell in Week 1, holding him to 60 yards on the ground. Safety Jordan Poyer earned PFF’s highest run-defense grade against the Jets. He had five “stops,” which are defined by PFF as tackles that result in an offensive failure. Here’s a good sign for the future: The Bills’ two highest-graded defensive players against the Jets were Edmunds, playing the first game of his second season, and rookie defensive tackle Ed Oliver. The team is counting on those two becoming cornerstones of the defense for years to come. EDGE: Giants.

When the Giants pass: Yes, Eli Manning is still there. The 38-year-old is at least a few years past his prime, but the Giants evidently don’t feel comfortable handing the offense over to rookie first-round draft pick Daniel Jones yet. After trading away Odell Beckham Jr. in the offseason, the Giants don’t have anything resembling a No. 1 receiver. Sterling Shepard is New York’s top receiver, but his status for Sunday’s game is uncertain because of a concussion. Tight end Evan Engram had 11 catches for 116 yards and a touchdown against the Cowboys. EDGE:Bills.

Special teams: Watching Kaare Vedvik melt down for the Jets should make Bills fans appreciate Stephen Hauschka more. Punter Corey Bojorquez had a better day against the Jets than his 30.0-yard net average on three attempts would suggest. He got unlucky when his second put bounced into the end zone for a touchback. The Bills missed Andre Roberts in the return game in Week 1. Micah Hyde fielded one punt he probably shouldn’t have and then let another bounce that in hindsight he should have caught. Letting it hit the ground backed the Bills up on their 2-yard line. The Jets recorded a safety on the next play. Punter Riley Dixon had a strong first week for the Giants, placing three of his four punts inside the Dallas 20-yard line. EDGE: Even.

Coaching: McDermott and offensive coordinator Brian Daboll have complete confidence in Allen. That was apparent by how the team started the game against the Jets. Although it didn’t work in the first half because of turnovers, Daboll is right that the team was moving the ball. Credit him for not abandoning the plan. McDermott and defensive coordinator Leslie Frazier had the Jets off balance all game. What will they do about Barkley? Giants coach Pat Shurmur is being second-guessed in New York for not giving the ball more to his star running back in Week 1. It wouldn’t be a surprise for Shurmur to try to make amends in the Giants’ home opener. EDGE: Bills.