The hype around Rasmus Dahlin heading into the 2018 draft was massive. And as the Buffalo Sabres and their fans saw last season, there wasn't a shred of hyperbole.

Dahlin played all 82 games, a feat he was particularly proud of, and put together one of the finest seasons in NHL history for an 18-year-old defenseman after the Sabres made him the No. 1 overall pick in June 2018. He was a unanimous selection to the NHL All-Rookie Team and finished third in the voting for the Calder Trophy behind Vancouver forward Elias Pettersson and St. Louis goalie Jordan Binnington.

Dahlin led rookie defensemen and was third among all rookies with 44 points (9-35-44). His 35 assists were second among rookies, as was his average time on ice (21:09). The point total was the second-most in history by a rookie defenseman before age 19.

Dahlin also had eight multipoint games, tying Bobby Orr for the second-most ever by an 18-year-old blueliner.

So what can we expect from Dahlin in Year Two?

Heading into training camp, Dahlin has worked all summer to get stronger. He wants to score more goals and play more minutes. To do that, he says has to be "quicker in my mind, quicker with my hands, quicker with my feet." He wants to erase the memory of last season's dismal finish and rekindle the feelings of the first 25 games of his career, when the Sabres were 17-6-2 and at the top of the NHL standings.

Along with Tampa Bay standout and former Norris Trophy winner Victor Hedman, Dahlin will be one of the marquee attractions when the Sabres and Lightning play two games in Stockholm, Sweden, on Nov. 8-9.

And most of all, Dahlin wants to give the Sabres a proper celebration of their 50th anniversary by surprising the pundits across North America and getting them back into the Stanley Cup playoffs.

"That's why I really want to have a good year – to help us make the playoffs," Dahlin told The Buffalo News at last week's NHL Player Media Tour in Chicago. "The 50th anniversary will be special. I think we have a good team. I really do. I think that 'Botts' [GM Jason Botterill] has done a really good job so far. Hopefully this can be a good year for us.

"I learned a lot last year about the Buffalo Sabres. I see people in the shops in Buffalo all over. They're wearing Buffalo Sabres shirts even though we haven't been in the playoffs for a lot of years. They're super passionate. I'm very proud to play for the Sabres."

[Sabres' Rasmus Dahlin on Year Two: 'I will be as ready as I can']

If he gets to 50 points this season, Dahlin will join Phil Housley, John Van Boxmeer, Jerry Korab, Garry Galley, Doug Bodger and Jocelyn Guevremont as the only Sabres defensemen to reach that figure. Going one step further, Housley and Van Boxmeer are the only ones to get to 60 points.

"I have big, big expectations for him," Sabres captain Jack Eichel said of Dahlin. "Just think about how good he was last year in Year One, how much more confidence he has and how much more he knows now. I think he's primed to have a monster season. I'm really excited to watch him."

The rest of the league is duly impressed as well. The News inquired with several top NHLers at the Player Media Tour to get their thoughts on Dahlin. Here's what the other side thinks of one of the Blue and Gold's prime players.

Dylan Larkin, Detroit center: "As the year went on, he got better every game. We played them early, played them in the middle of the season and played them a couple times late. He looked more comfortable at the end of the season, more confident with the puck. He's a great skater and as he gets older, he's just going to become more dominant. As a division rival, I'm not excited about it, but he's a very good player."

Torey Krug, Boston defenseman: "He's about as smooth as you can be out there and has the poise to really make some big-time plays. I see a guy that, with probably another year or two of learning which plays he can get away with, will even improve the speed he thinks the game. He's going to be a great defenseman in the NHL. He's got all the talent in the world you need." 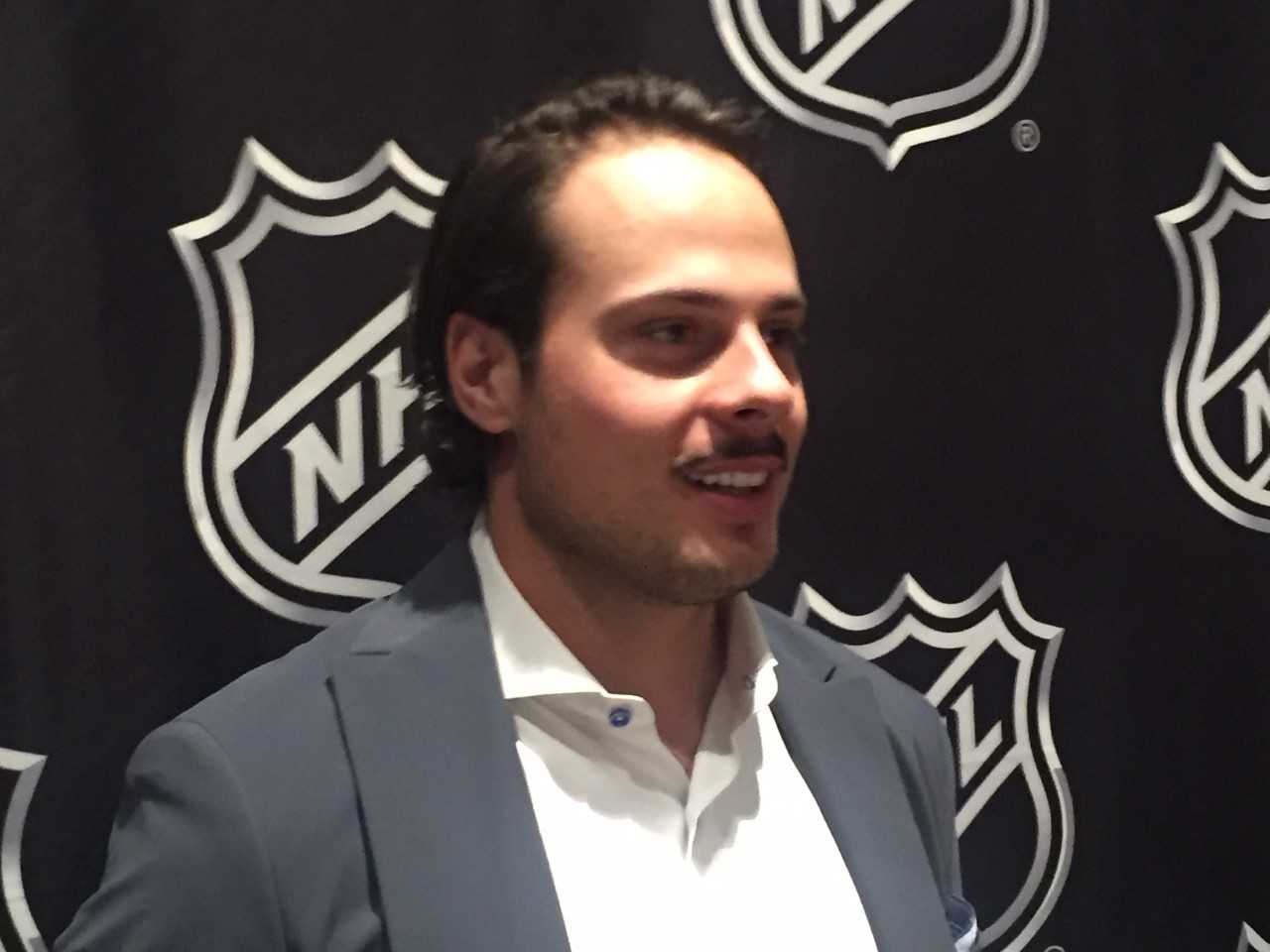 Auston Matthews, Toronto center and former No. 1 overall pick (2016): "I thought he handled all the hype really well. You're going to go through ups and downs and that's just the way it goes. For myself personally, I had good people around me on the team, the management staff, coaches and my family. Everybody kind of looks after each other, especially us young guys in our first year.

"I know for myself, I went through ups and downs and that's the way the season goes. It's not going to be a straight shot up north for him. It's important to have good people around you and when things aren't going well, you have that support."

Jonathan Huberdeau, Florida center: "He's really good, a lot of skill. Obviously, he's going to have a bright future. He's big for his age and a guy that they can count on defensively. He's big, doesn't mind throwing his body around in the corners. He's never easy to play against. Sometimes, you forget. You were like, 'This guy is 18?' He wasn't shy in the corners."

Thomas Chabot, Ottawa defenseman: "So talented. Very good. It was his first year and he was a guy who looked like he had been around for so long. So many young guys in this league like him are very talented. It should be fun to follow guys like that and battle against him."

Henrik Lundqvist on Dahlin: "I thought he did a great job." (Mike Harrington/Buffalo News)

Henrik Lundqvist, New York Rangers goalie and brother of Dahlin's Frolunda teammate Joel Lundqvist: "He's such a smart player and a skilled player. The difference between a D-man and a forward is that a forward can dictate a game and take control. A D-man has to react to what's going on in front of you, kind of like a goalie. I thought he did a great job. There's a lot of pressure coming in as a first pick. He's calm and well-prepared for this and that was a great job by him."

John Klingberg, Dallas defenseman and Dahlin's summer workout partner in Gothenburg, Sweden: "Everyone knows who he is now and back home, we know who he was before he came over. It's going to be exciting for me, because I work out with him in the summers, to see him and (Dallas sophomore) Miro Heiskanen go at it for a lot of years to come. They're going to be great players.

"I think Dahlin has a little more edge to his game. He can play physical. He's got a temper as well. Miro has that too but is a little more calmed down. There's similarities, but they're different as well."

Jacob Slavin, Carolina defenseman: "Coming in at 18-19 years old, I can't imagine. When I was 18-19, I wasn't ready to do that. It's crazy what these guys are doing. The impacts on their team is special to watch. You can learn from young guys like that, the way they play the game is pretty crazy. The skating ability of (Colorado's) Cale Makar and Dahlin is spectacular and it's fun to watch them.

"You can have the most talented defenseman, but if you can't think the game at the NHL level, I don't know how great they'll do. It takes a lot of mental maturity from that standpoint to be able to play from the back end and do the things Rasmus can do. When he has the puck, he controls the play, right? I don't think you can do that on skill alone. You have to be able to think the game on a high level."

Sean Couturier, Philadelphia center: "Wow, he was really good. Great, great skater. Controlled the puck so well as a young D-man already. He's got poise in his game. Those are things as a young D-man you don't usually have right away. He has them already so his potential to be a superstar is really high. I'm sure he'll have a bright future."