For 17-year-old Nick Sanderson of Williamsville, it’s a dream come true. Earlier this month, he found out that a largemouth bass he caught in a Clarence neighborhood pond qualified him for the inaugural Big Bass Junior Championship, representing the State of New York at a Priest River/Lake Pend Oreille fishing resort in Idaho.

The road to the Gem State wasn’t an easy one for Sanderson. The Williamsville East senior is an avid multispecies fisherman. He belongs to the Lake Erie Chapter of Fly Fishers International as well as the Erie County Bassmasters. He heard about the 2019 Big Bass Junior Championship through a friend of a friend. Family friend Evan Roth of Williamsville is brother-in-law to James Hall, editor of Bassmaster Magazine.

“We went to the Bassmaster Classic in Knoxville earlier this year and met Mr. Hall,” said Sanderson. “He showed us around, which was quite a thrill. We found out about the big bass contest.” 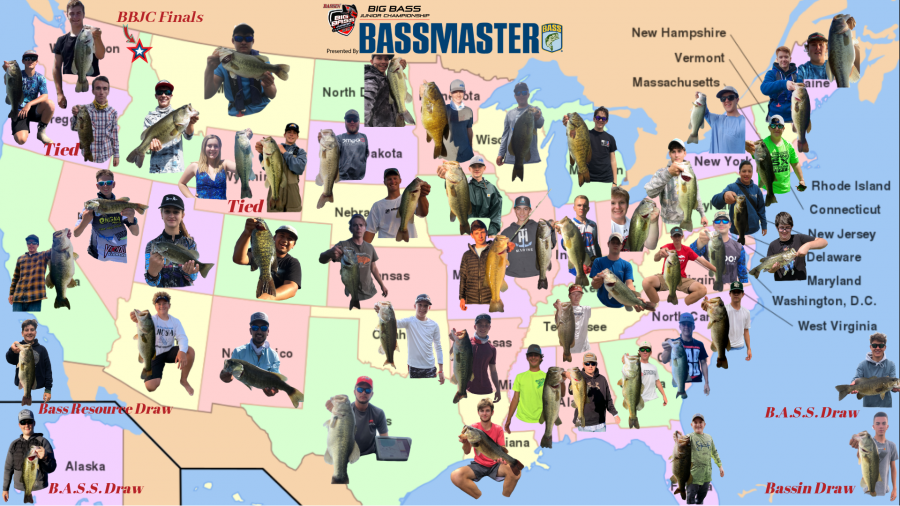 In its first year, the Big Bass Junior Championship started on Jan. 1 and ran through Aug. 15. Everything was coordinated through a website. Anglers between the ages of 14 and 25 (basically high school and college students), pay a $25 entry fee and select the state (or states) where they will fish. There are no restrictions on fishing equipment or what body of water they intend to fish.

Once a bass is caught, the person who reeled in the fish takes a photo with the official ruler, showing both length and girth. A special formula is used to determine the fish size so that all fish entered are caught and released. The angler who catches the winning fish in each state will be invited to compete in the national championship. It’s that simple.

As the world continues to deal with the worldwide Covid-19 pandemic, a webinar was held last week with the fishing public interested in what was happening with Lake Ontario Chinook salmon stocking in 2020.Bottom line: A new stocking strategy will…

It came down to a Hail Mary pass, a game-winning drive in the final minutes of the game – no different than the magic Josh Allen engineered in the fourth quarter last Sunday. As time was running out to submit a quality fish in the tournament, Sanderson was planning a hiking trip to Algonquin Provincial Park. The day before he was supposed to leave, he talked to family friends Katia and Todd Hellert of Clarence about fishing in their neighborhood pond.

With little time to spare, he cast an imitation frog into the weeds. He felt a strike on his lure. Sanderson switched over to a Senko that was immediately hit by a largemouth bass that stretched the tape to 19 inches long. The girth was 12.25 inches. Would it be big enough? He took some quick photos and sent them when he returned home.

Meanwhile, in Pulaski, Garrett Lawton was measuring a fish very similar in size. It wasn’t as long as Sanderson’s, but the girth was bigger. Big Bass organizers were giving the edge to Lawton using the formula of length times length times girth and divided by 1,200. However, when tournament director Bill Siemantel of California contacted the Oswego County fisherman, his mother didn’t seem interested in having her son attend. According to the rules, when a state winner can’t attend for whatever reason, the runner-up will represent the state. Enter Sanderson and his last-minute lure toss. Also, credit Sanderson’s mother, Laurie, who was absolutely thrilled to see her son, Nick, represent New York in the junior championship.

“It was funny because when Nick was growing up, he wanted to play hockey,” Laurie Sanderson said. “I didn’t want to have to get up early every weekend for games and practices, so I said no. I didn’t discourage him when he started up with fishing, though, and little did I realize that early morning is one of the best times to fish.” 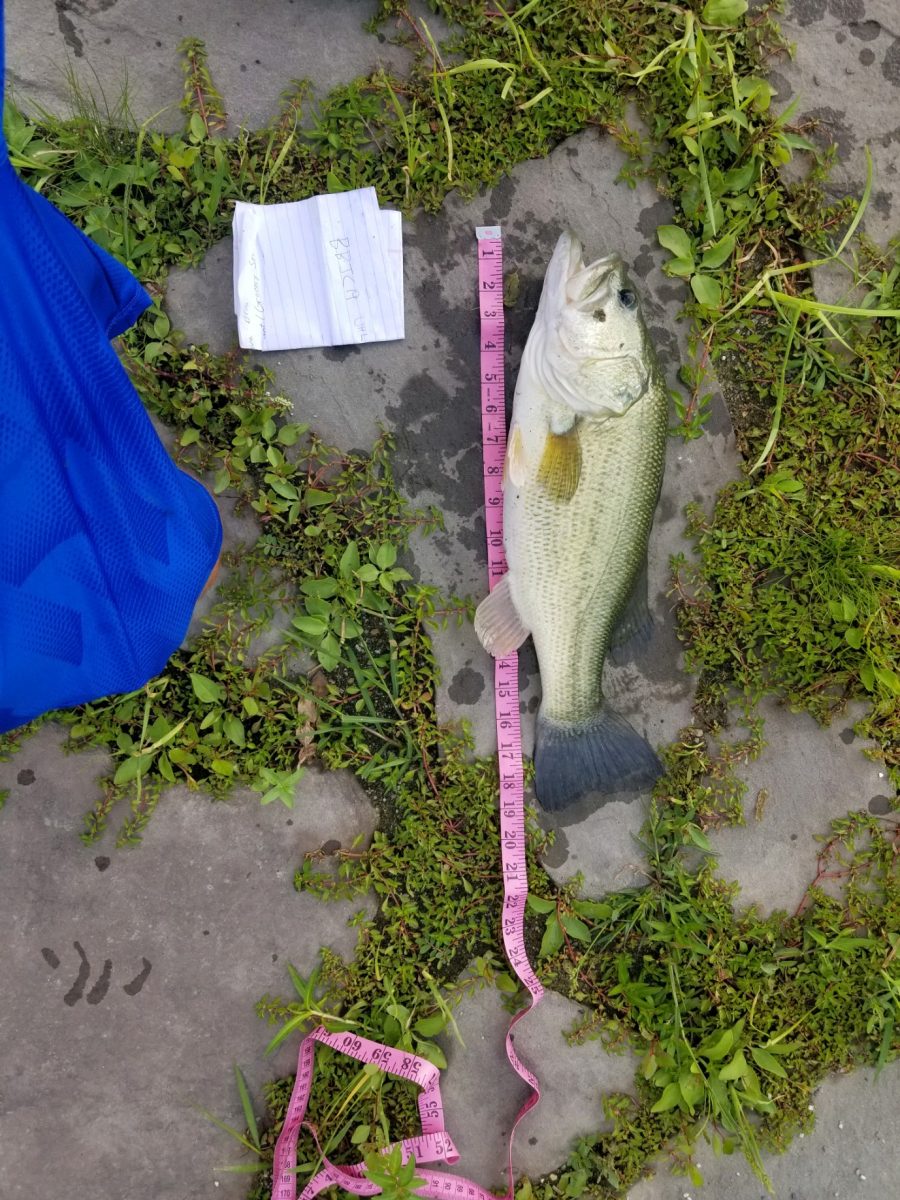 Every fish entered is measured by length and girth to determine the weight, allowing for its release. (Photo courtesy of Nick Sanderson)

At a time when we need to see more youth involved in the sport of angling, Nick’s mother must be commended for going above and beyond, especially as a single mom.

“Sometimes I’ll just bring a book along and let him fish as long as he wants. It’s leading him down a path that will affect his future. He would love a job like the position James Hall has as a fishing magazine editor. We’re trying to find a good school that offers English and some type of environmental studies involving fisheries management.”

There’s no question that younger Sanderson has the dedication, desire and drive. He works at Captain Bob’s Outdoors in Clarence with Steve Hawkins to help fund his fishing habit, but he also volunteers for some of the special fishing events “Hawk” hosts, such as with Kids Escaping Drugs. He’s helping with the Lake Erie Chapter of Fly Fishers International outreach efforts such as with the Ray’s Day Kids event held each May, too.

“Some 4.2 million anglers from the ages of 14 to 17 bought fishing licenses last year,” said Siemantel. "Many them would never be able to afford a boat to fish out of but would love to compete in a tournament on a national level. This is what the BBJC is all about. It could be one cast to win it all in the finals.”

The winner of the event will receive a brand-new Bass Cat Margay boat with a Mercury Outboard, MotorGuide trolling motor and rigged with Lowrance Electronics. Total prizes for first place are worth more than $56,000. In all, the tournament will yield prizes worth more than $175,000.

Who knows where this path will take Nick Sanderson, but he will certain take it in stride one cast at a time. The BBJC will be held out of the Willows Club by Anglers Inn International by Billy Chapman, Jr. on Oct. 19, and Sanderson will be there representing the Empire State.

“It’s all about getting youth involvement with bass fishing and this contest helps remove barriers from competing,” Siemantel insisted. “You don’t need a boat to compete on a national stage, as Nick has proven. This is a great opportunity for the kids, and we are happy to see Nick represent New York. Nick and his mom are great, and this event is a really big thing for the future of fishing.”

To find out more information about the BBJC, visit the event website at bigbassjuniorchampionship.com.