Rich Davenport of Tonawanda says walleye action is still hot off Cattaraugus Creek and Dunkirk. Fish are moving up and down in the water column, although remaining predominantly over depths of 80 to 100 feet. Fish one day will be down 35-40 feet and the next they could be down 55-60, according to Davenport. Best approach was eight to 10 colors of lead core line and dipsy rigs set back between 135 to 180 feet at a No. 2.5 setting, depending on where the fish are hanging. Inside divers are running on 1.5 setting set between 115 and 150 feet, depending on where the walleyes are hanging. All fish came off stickbaits, with the hottest color being the pink tiger Bay Ray, short shallow stick. Fire tiger, blue tiger and orange long shallow Bay Rats and Renosky sticks also have put meat on the deck. He recommends that anglers focus on smaller profile sticks in the fall, as well as small spoons. It appears the fish are more aggressively feeding on smaller bait, like emeralds and small gizzard shad, versus rainbow smelt. With long sticks, the fish appear to be tail biting; smaller sticks are being inhaled. Also, Davenport says the yellow perch are schooling in depths between 62 and 65 feet straight off the Catt, off Evangola and just west of Sturgeon Point.

Capt. Hans Mann with Buffalo Harbor Outfitters confirmed that he has bottom-bounced for walleyes out of Buffalo and didn’t get into walleyes until he hit Sturgeon Point. He also caught 25 nice perch in 62 to 65 feet of water. He did well on walleye out of the Catt all week in 75 to 85 feet of water.

Capt. Codey Allen of West Seneca reports doing well in 70 to 90 feet of water off Cattaraugus Creek this past weekend. His boat was averaging around 10 fish per hour. One good approach for him was using nine or 10 colors of lead core line with Northern Lights Bomber stickbaits. They seemed to be the best producer of walleyes. Riggers were parked at 60 to 75 feet and pulled in a few fish and dipsy divers set at 205 feet on a No. 2 setting were effective.

Andy Full of Tonawanda and Josh Snyder of Lewiston teamed up to win the Buffalo Anglers Team Trail tournament out of Buffalo last weekend. They had a five-fish limit of smallmouth bass that checked in at 23.38 pounds at the scale. Key to their success was focusing around 40 feet of water off Buffalo. Fishing was tough. Second place was the team of Patrick Schlosser and Don Roesch with 21.14 pounds of smallies. That’s the only information we could get out of them with some big tournaments coming up.

Capt. Frank Campbell of Niagara Region Charters took it a bit further by reporting he did well fishing with Delbert Davis of Indiana, targeting the waters around Seneca Shoal in 26 to 42 feet of water with crayfish, tubes and drop-shot rigs using the Strike King “Dream Shot” plastics. Some days were better than others, but they did well overall. 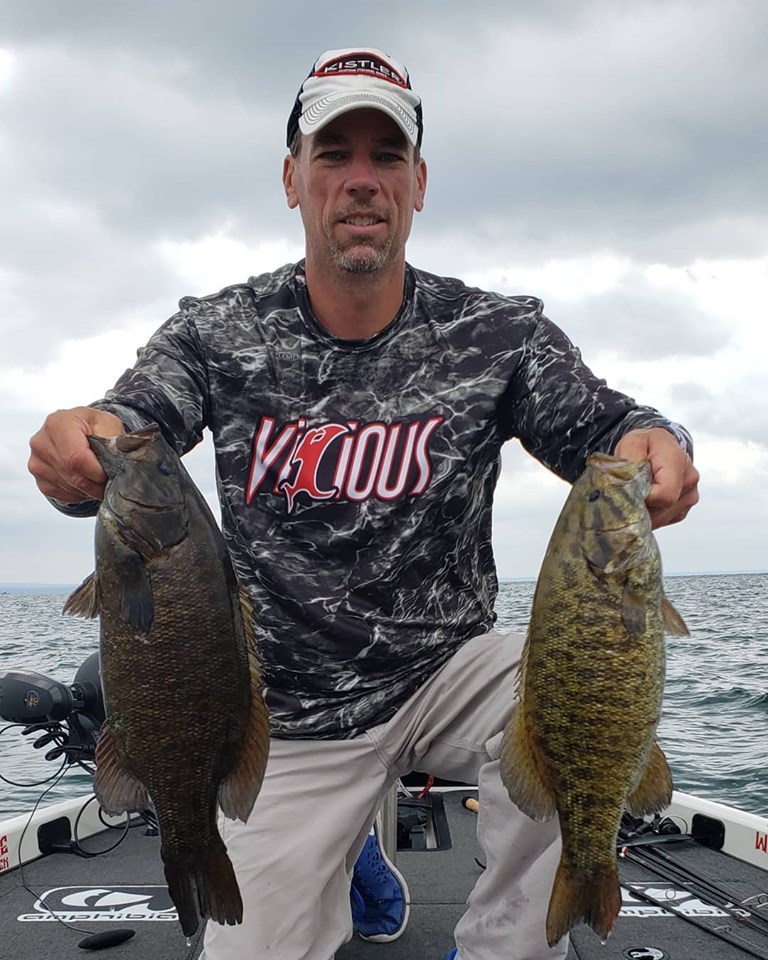 While the salmon haven’t shown up in great numbers, there are a few swimming around according to Rich Pisa of Kenmore. He hiked into the Niagara Gorge area and tossed some spinners from shore to connect with a couple nice kings. Look for king action to slowly start to ramp up moving forward, especially if we get a cool rain. One of the big concerns for shore fishermen is whether the Power Authority fishing platform will open in time.

According to the power folks, the platform was still experiencing some high-water issues, but it's being cleaned up and inspected this week for a Saturday reopening. Keep your fingers crossed. Call 796-0135, ext. 45, to find out if it’s open. Bass fishing at the Clay Banks and along Fort Niagara were good for bass this week according to Lisa Drabczyk of Creek Road Bait and Tackle. Crayfish is the best bet. Walleye action has slowed during the day, but the night bite has been good along the Stella drift. Don’t rule out the Niagara Bar around the green buoy marker for bass and walleye, too.

A few salmon have been reported off the pier in Olcott, but the main run has not yet started according to Karen Evarts at the Boat Doctors. If you are trying to catch a king, start at dusk by tossing Cleos, Spinners or J-13 Rapalas. For lake trollers, there has not yet been a big staging event. Try for kings in 60 to 80 feet of water at first light with meat, J-plugs, flasher-fly or magnum spoons. Better action has been deep about 8 miles out from Wilson and Olcott.

It was primarily a spoon bite earlier this week for captains Tim Sylvester and Jim Gordon as they caught salmon limits. Black, red and caramel colors were working for the spoon selection. Some pike and largemouth bass also were caught off the piers in Wilson and Olcott, usually during the day.

Sidney Syracuse hit a huge largemouth drop-shotting a nightcrawler off the east pier in Olcott last week while checking out the fall fishing action with her dad.

Walleye action is still good according to Mike Sperry at Chautauqua Reel Outdoors. Fish are being caught by vertical jigging and trolling on the north basin. Use No. 9 Jigging Raps, Snap Raps and Flat jigs to entice fish into hitting bait. Hot-n-Tots and F7 to F9 Rapalas trolled off downriggers or lead core line also is working.

The musky casting bite perked up some in the last week with fish caught casting 8-inch and 9-inch Leo Jerkbaits in 10 to 13 feet of water on the north basin. The late afternoon bite has been the best lately.