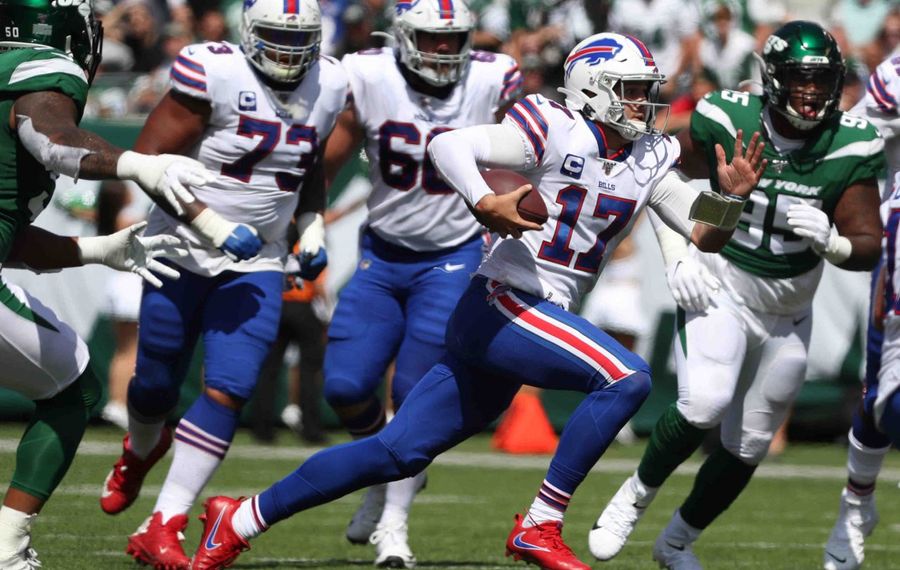 The Buffalo Bills got a dramatic win in true AFC East fashion, grinding out a 17-16 victory against the New York Jets that saw their franchise quarterback reach the highs and lows that are part of what Bills head coach Sean McDermott describes as "the growth mindset."

Using PFF data, here a look at how quarterback Josh Allen fared and what to look forward to as the Bills take on the New York Giants in Week 2.

Allen wavered through the contest against the Jets, with the third lowest-graded performance in the league in the first quarter of Week 1. He threw an unlucky interception and was forced to scramble out of the pocket on four of his 17 dropbacks.

His grades for the second and fourth quarter were in the top half of the league for those quarters, but he had the second-lowest grade in the third quarter among starters.

Bills receivers didn’t necessarily help Allen’s case as they combined for four drops but ball placement was an issue. According to PFF data, Allen unleashed an accurate pass just 59.4% of the time, which was in the bottom half of Week 1 starters. That is an eerily similar number to last year’s 55.5% figure.

Utilizing our play-by-play grading, one of the processes is ball placement that tracks every pass location whether it’s an accurate throw, on frame, catchable inaccurate or just blatantly missed. Only 19 of Allen's 32 attempts were deemed as accurate passes.

Looking ahead to the Giants, New York allowed Dak Prescott and the Dallas Cowboys to throw for 405 yards and four touchdowns. Only cornerback Janoris Jenkins had plus grades in coverage for the Giants.

The Giants got home with very little pressure, just four pressured dropbacks on Prescott, something that might bode well for Allen. Against the Jets, Allen was pressured on 13 of his dropback attempts and had the league’s eighth-lowest grade on such passing plays. However, when kept clean from pressure as he was on 31 dropback attempts, he finished with the league’s ninth-highest passing grade.

If the Giants are unable to get home with pressure, Allen should be encouraged by the fact that he completed 18 of 26 attempts from a clean pocket for 146 yards and a very strong 84.0% adjusted completion percentage.

Allen's recipe for success is going into focus: He attacks the short area of the field well despite having one of the league’s strongest arms and when he’s kept clean from pressure, he’s shown the ability to win games. That should continue against the Giants as he outgraded Prescott when targeting passes between 1-19 yards past the line of scrimmage. Prescott threw for more than half his yards on throws within that range.

The Giants pose an interesting matchup as they allowed Prescott to complete 28 of 32 attempts to what PFF considers "open receivers" and that’s something Allen should be able to take advantage of.

The potential for a big game is there against a more-than-lackluster secondary if Allen and offensive coordinator Brian Daboll can take advantage of it.

Pro Football Focus will be contributing to BNblitz.com all season long.