Arctic wildfires are not unprecedented. Some proportion of them actually bring beneficial impacts, as is the case with some wild and forest fires in the mid-latitudes, burning old growth and allowing for new growth.

Recent years have been another matter. Extraordinarily warm and sometimes hot, dry conditions has led to unprecedented coverage for these fires, with major impacts not only on site but across much of the northern hemisphere.

NASA is leading research into how and why boreal and tundra wildfires became so intense and widespread this year, and what consequences follow from them.

“Fires are a natural part of the ecosystem, but what we’re seeing is an accelerated fire cycle: we are getting more frequent and severe fires and larger burned areas,” said Liz Hoy, a boreal fire researcher at NASA’s Goddard Space Flight Center in Greenbelt, Md.

Forest and wildfires in mid-latitudes are sometimes started by humans and are often battled because they pose immediate threats to lives and property. Arctic fires generally start in remote locations, most often triggered by high latitude lightning in, yes, far northern thunderstorms. They cannot be readily controlled. Because of that, such fires often consume hundreds of thousands of acres. Efforts to limit them are not undertaken unless they approach human settlements.

With such widespread burn coverage, fire impacts are much greater and more widespread than in the past. The nature of high latitude vegetation is such that there is much more combustion of unique organic soil and ground cover tundra vegetation.

There are great storehouses of fuel on the tundra because there is little decomposition of the ground cover and the topsoil due to lower temperatures and the lack of more nutrients to speed decomposition. This tundra topsoil is very carbon rich, as is the permafrost beneath it. Until the fire comes along, the carbon in the permafrost remains trapped. But once the fire melts the permafrost, huge stores of additional carbon are released into the atmosphere.

“When you burn the soil on top it’s as if you had a cooler and you opened the lid: the permafrost underneath thaws and you’re allowing the soil to decompose and decay, so you’re releasing even more carbon into the atmosphere,” Hoy said. 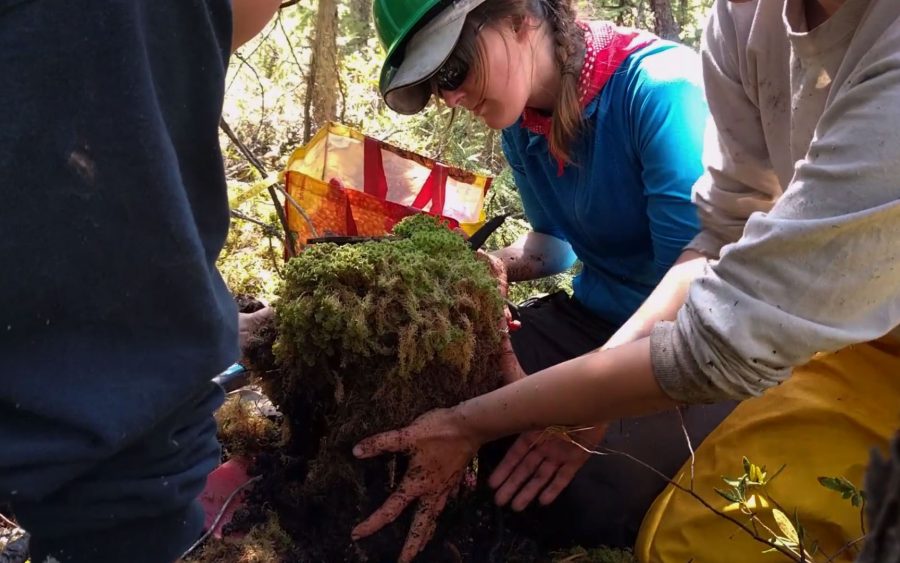 Researchers dig out and measure a block of soil in Saskatchewan, Canada, during a field expedition for NASA’s ABoVE campaign. Soils in the Arctic and boreal regions have very thick, organic mats that release large quantities of carbon to the atmosphere when a wildfire burns them. (Photo courtesy of Sander Veraverbeke/NASA)

A NASA study of a recent fire season — not even this worst season still in progress — shows the tundra fires offset half of all the carbon absorbed by Canada’s vast forests to the south. The predicted and well-verified accelerated warming in the high Arctic latitudes, already directly tied to the warming climate, is then sped up further by this additional release of stored carbon leading to still more warming, in a very bad feedback cycle.

What does generally stay at higher latitudes are health impacts from so much more particulate matter being released into the air. Alaska alone has had more than 30 health advisories this summer due to smoke and particle filled-air, often acute even near the large city of Anchorage. There were several days during which Anchorage had the worst air quality in the U.S. due to these fires, as seen in this FAA Air Advisory photo.

Of course, these fires occur in months when the most people are outdoors, with greater exposures to the particulates and gases.

Should anyone think this extra carbon released in the Arctic stays in the Arctic, that is simply not the case. The carbon is mixed down to lower latitudes by upper atmospheric winds, accelerating warming around the northern hemisphere in varying degrees, no pun intended. This is a feedback cycle which shows no signs of abating. Again, the more warming in the Arctic, the greater the likelihood of periodically weakened upper level winds and atmospheric stagnation such as just occurred in the tragic stalling of Dorian over Abacos Island and Grand Bahama, and recently in the devastating flooding caused by Harvey in Houston in 2017 and Florence in the Carolina in 2018.