After being struck by a bullet, Buffalo youth football coach Norzell Aldridge was quickly loaded into a car driven by a cousin who headed to Erie County Medical Center without waiting for an ambulance.

A surveillance video shows the car stops at the corner of Sycamore Street and Koons Avenue, where police parked not far from the shooting scene. Aldridge gets out of the vehicle and collapses. There's some interaction with police before the wounded man is put back into his cousin's car, which rushes off to the hospital about 2 1/2 miles away.

Now, Aldridge's friends and a man who posted the video on YouTube are asking if the popular football coach would be alive if not for the stop that took up to two minutes, or if police had given Aldridge a "lights and sirens" ride or at least a police escort to the hospital.

"He stepped out of the car, takes two steps and collapses," said Maher Khalil, who posted the surveillance video to YouTube. "Minutes are lost."

Khalil, whose family owns the tire shop with the surveillance video camera, also questioned why an ambulance didn't arrive while Aldridge was at the shooting scene.

Buffalo police officials say they are reviewing the surveillance video as part of their investigation of the Aug. 31 shooting, and don't have enough information to determine what was occurring during the two-minute period. 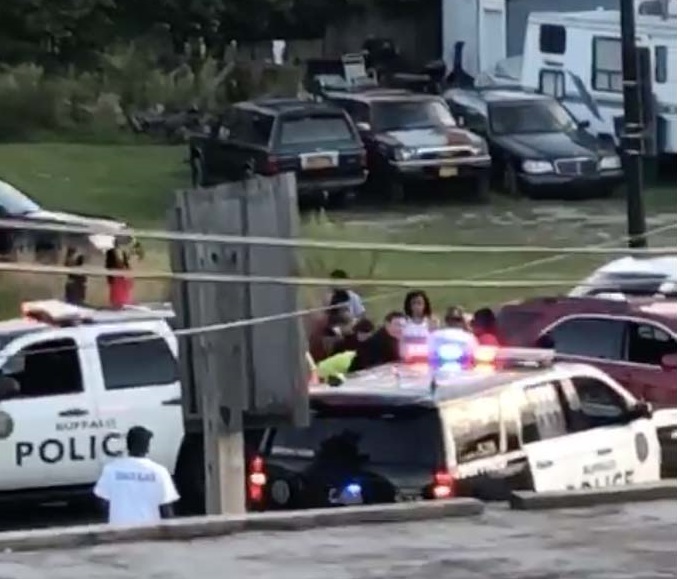 Chief of Detectives Dennis J. Richards noted the scene was chaotic, with people running in all directions.

"Cars are leaving with possible suspects, victims or people fleeing the scene," he said.

Generally, Richards said, police administer immediate first aid to victims, while waiting for an ambulance. But specific circumstances can dictate what action is appropriate, he said.

"The totality of the situation dictates what takes place," he said.

Police generally prefer if people wait for an ambulance, but if – as in this case – they insist on driving a patient themselves, the officer's options are to arrest the driver, or let the people proceed and notify dispatch and the hospital that the car is on its way, said Capt. Jeffrey Rinaldo, a police spokesman said.

In this case, since friends and family wanted to transport Aldridge, officers let the car proceed to ECMC. But police also requested an ambulance come to the Sycamore intersection around the time the car carrying Aldridge was there. The ambulance arrived within three or four minutes, reports show.

Police also dispatched officers to ECMC as Aldridge was being driven to the hospital, Richards said.

Although some of the chronology surrounding the incident remains unclear, it appears the entire scenario – from shots reported being fired until the vehicle transporting Aldridge left Sycamore Street for the hospital – occurred within five minutes, The News found.

The Aug. 31 Beast Elite Ducks youth football game that Aldridge helped coach at Emerson Park off Koons Avenue had ended when Aldridge spotted two teenagers not associated with the game arguing in the distance, and went to defuse the situation, witnesses have told The Buffalo News. Suddenly shots were fired. Aldridge, 36, was shot in the stomach. A 20-year-old Buffalo man was hit in the arm.

Hunt, one of the other coaches, said he rushed over to the scene. By the time he got there, others had already decided to transport the victims to the hospital in private vehicles rather than waiting for an ambulance, Hunt said.

"He was actually already in the car before I even could get to him," Hunt said of Aldridge.

Hunt said he didn't know if anyone had called an ambulance at that point.

“A shot is a shot. You ain't going to wait," Hunt said, referring to an ambulance. "Most of the time when people wait, they die."

Aldridge's cousin, who was at the game, drove the vehicle Aldridge was in, said Dwayne Warren, a longtime friend of Aldridge.

The other injured man, who has not been identified by police, was in Hunt's truck, driven by Hunt's nephew.

The Buffalo News reviewed two surveillance videos from a tire shop at Sycamore and Koons, one of which was posted on YouTube by Khalil. The News also reviewed two cellphone videos taken by Khalil's wife, Flor, who witnessed the car carrying Aldridge stop in front of the tire shop. The News also reviewed information from Buffalo police and the ambulance company, as well as a dispatch report from Broadcastify, a firm that records and archives police dispatch reports.

Taken together, a picture emerges, although it is incomplete and officials say likely inexact, given that the time stamps on different surveillance videos and dispatch reports are not necessarily synced.

At 7:05 p.m., police are notified of a fight near the Emerson Park football field behind Harvey Austin Elementary School at Sycamore and Koons.

Police are dispatched to the scene within two minutes. The situation escalates – at roughly 7:12 p.m. – into a "shots fired" call, reports show.

At around 7:13 p.m., the tire store surveillance video shows a silver vehicle believed to be transporting a 20-year-old Buffalo man who was shot in the arm, driving along the grass and sidewalk on Koons Avenue past police vehicles without stopping en route to the hospital.

Right behind the silver vehicle is a red SUV believed to be transporting Aldridge. The red SUV stopped in the intersection where at least two police cruisers were parked. It could not be determined from the videos if police stopped the SUV or the driver did that on his own.

At 7:15 p.m., according to the Buffalo Police Department, officers called for an ambulance.

That's around the time the red SUV left with Aldridge, heading to ECMC, according to the videos.

AMR dispatched an ambulance after receiving the call at 7:16 p.m. It arrived at 7:19 p.m., according to an AMR spokesman. The victims were gone, the spokesman said.

Aldridge died at ECMC, police announced the next day. The 20-year-old was treated for an arm wound, and released from the hospital.

Police asked anyone with information to call or text their confidential tip line at 847-2255.

The Aug. 31 shooting of Norzell Aldridge

7:15 p.m.: Police call for ambulance, according to Buffalo police

7:15 p.m.: Car with Aldridge as passenger drives away without police, heads for ECMC (surveillance video)

7:16 p.m.: AMR received call then dispatched ambulance, according to AMR

7:19 p.m.: Ambulance arrives at Sycamore and Koons, but victims are gone, according to AMR

Youth football coach killed trying to break up a fight: 'He died a hero'