I am a member of what my friends and I call Club 1959, meaning I turned 60 this month, one of those birthdays that leads to a just-how-fast-is-this-all-moving reflection about time. While the age itself is not that big a deal, beyond gratitude for the countless people who always came through when I  needed it, I have a growing appreciation for what my parents meant years ago at a juncture when I had no clue.

In the old days they would sit at the kitchen table, drinking their coffee and sharing some tale of the old Town Casino or Santasiero's or Christmas downtown or Jimmy Slattery or the Buffalo they knew when they were young, which would always end with them pausing to say:

How is it possible that time went by so fast?

I was a kid. I would nod and agree, with no real idea of what they were talking about. That was a point in life when summer vacation seemed like an endless landscape, when reaching Christmas was an impossibly long journey from September, when nothing about growing up, in any way, felt fast.

Looking at my own kids, adults today and in grade school yesterday, I understand.

So the timing seemed most appropriate last month, when the Los Angeles Clippers of the National Basketball Association announced they intend to make throwback Buffalo Braves uniforms part of their "jersey rotation" in the coming season as a means of honoring the origins of their franchise.

The images of those jerseys gave me a little jolt, a reaction I understand is hardly universal. The median age for Americans is 38 and change, which means a sizable portion of the Niagara Frontier was born long after the old Braves left town in 1978, and has no living memory of the team or what it meant.

[RELATED: How the Braves came to Buffalo — and why they left]

Still, it is powerfully different for thousands upon thousands of us born on the other side. The Braves arrived when I was 10 and left when I was 18. That is a span in life you never forget, years that begin as a little kid and end with your first steps as a kind-of-adult into the world, a span when events are monuments, tattooed in memory.

It is natural, then, for a part of me — and I have no doubt it is the same for many contemporaries — to always feel a little wistful about the Buffalo Braves. 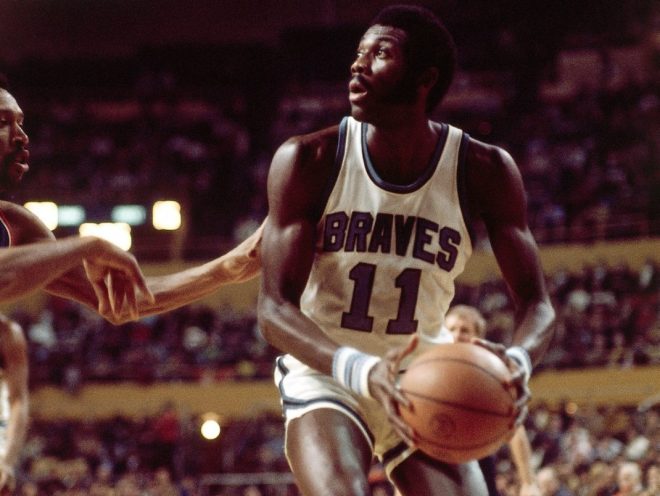 In the modern wait for the Buffalo championship we dream will someday come, a few teams remain especially memorable for the way that possibility seemed so achingly close, only a piece or two or a few breaks from the threshold — such as the Sabres of the French Connection and later of Dominik Hasek, or the Bills of the 1990s or even of that magical season in 1980.

For those of us who loved the Braves, the franchise at peak occupies that same spiritual space. The Clippers will wear orange-highlighted jerseys used by an early version of the Braves - a group I remember most vividly for the surreal night in the Aud when I was on a middle school excursion with a bunch of altar servers and Freddie Hilton shot the lights out as the Braves upset the classy and selfless New York Knicks.

Yet the team many of us will always revere – the years I remember every time I see my colleague, Milt Northrop, who was beat writer for the Braves – came together after owner Paul Snyder brought in Jack Ramsay to be the coach, after the jerseys changed in dominant thematic color from orange to a kind of powder blue and the Braves, abruptly, became a dynamic force.

I was a kid in Dunkirk when the team trained at nearby SUNY Fredonia, a moment when some of the greatest basketball players on the planet practiced in that little village. We would ride our bicycles there to watch as much as we could take in, and then we would hang around in the parking lot as the players left, in awe of the regal talent that swiftly transformed that team. 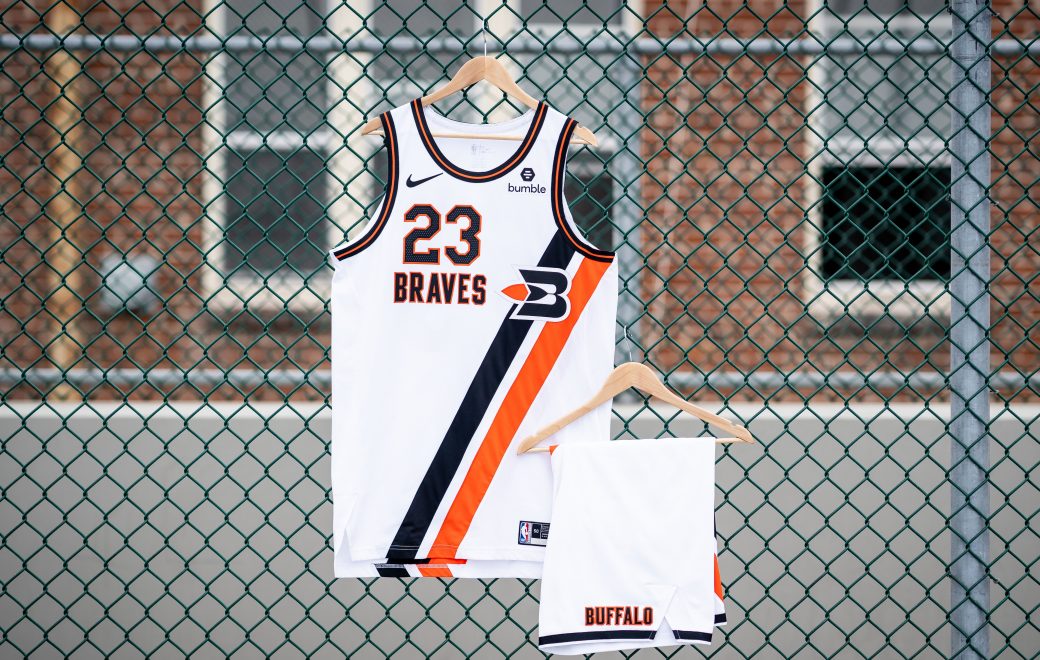 The throwback uniforms that will be worn by the Los Angeles Clippers. (Clippers image)

Even today, you have to wonder: How high might those Braves have climbed if the NBA of that era used the 3-point shot? They had Jim McMillian, who won an NBA title with the Lakers, and Jack Marin – in mind's eye, he is always shooting from the corner – and Ernie DiGregorio, the point guard who so rarely missed a foul shot, and Gar Heard, a critical key to transition on the front line, and plenty of other talent hungry to push the ball up the court.

The heart and soul in the great years, always, came down to Bob McAdoo and Randy Smith. McAdoo arrived from North Carolina in 1972 and would emerge as one of the dominant players in the game, a 6-10 miracle of quiet, loping grace who was often listed as a center but was a deadly shot a long way from the basket.

Smith, who set an NBA record for consecutive games and sheer endurance, was both a hard-slamming, gravity-free guard and a guy who somehow retained a grind-it-out, beat-the-odds link to us, a graduate of SUNY Buffalo State who went from playing college ball in sweaty Upstate gyms to electrifying some of the greatest arenas in the land.

That Braves team ran the floor with abandon, leading the NBA in scoring in 1974. Like so many in the region, I came from a factory family that did not have a pile of money. I had no way of going to Sabres games, but the Braves – even for a kid – were affordable and easy to see.

So we went to our share of games at the Aud, often watching from the distant orange seats as the Braves ascended to a point where they could go toe-to-toe with, say, the fearsome Boston Celtics. I have a vivid memory of  a night when we hung around for whatever reason after the game and briefly saw McAdoo and Smith (everyone called him Randy, as if he were family) outside the arena, two guys wearing long coats against the bitter chill.

Everything about them spoke to a kind of dignity and style that to a teenager was exactly how you hoped to someday be. 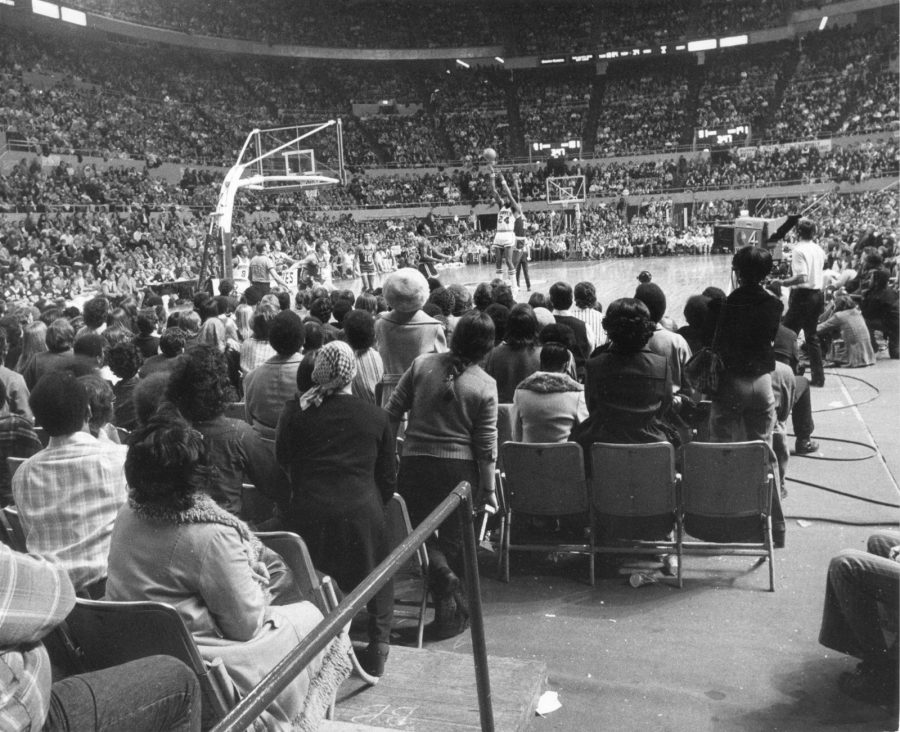 Today, I can understand just how fast it came and went. The epic moment in Buffalo was the 1974 sixth game brink-of-elimination playoff showdown with the Celtics, when McAdoo’s steal and bucket near the end tied the game with the crowd screaming so hard the place shook, until the instant that lifted it into that near-miss-pantheon:

Just as it seemed the game would surely go into overtime, the referees called a foul on McAdoo as time ran out. JoJo White sank two foul shots, the referees claimed there was not even a second on the clock, and the game ended there, the entire place inflamed.

Moments after the building seemed ready to fall down from sheer elation, we wandered deflated into the Buffalo night, while the Celtics took their showers and went on to win it all.

The Braves had two more strong years before it fell apart. All too soon, Ramsay vanished to build one of history's great championship seasons in Portland, and John Y. Brown came to Buffalo as a part-owner. Amid it all, McAdoo and many other pillars of the franchise were history.

The club abruptly seemed adrift. The debate about why or how it happened has continued for years, but in 1978 the Braves left the city as part of a complicated swap involving San Diego and the Celtics. In the space of a few years, they went from elite to gone.

The team was only here for eight years, but as I turn 60 I realize the Braves left a significant gift for those of us who were at an age when time seemed like molasses, and thus frozen in memory. At their peak, in an era of regional economic worry and self-doubt, they played with this kind of ecstatic fearlessness that taught us something about dreams, about how and where you define joy.

Then they left, so quickly you need to be pushing out toward 50 to even remember them, making it easy to relegate them to that emotional dollar store we call nostalgia, which to me does not really fit. All I know is that when I first saw the image of that throwback jersey, I did not see a savvy piece of 21st century branding.

I saw the Braves running the court, even now not out of time.