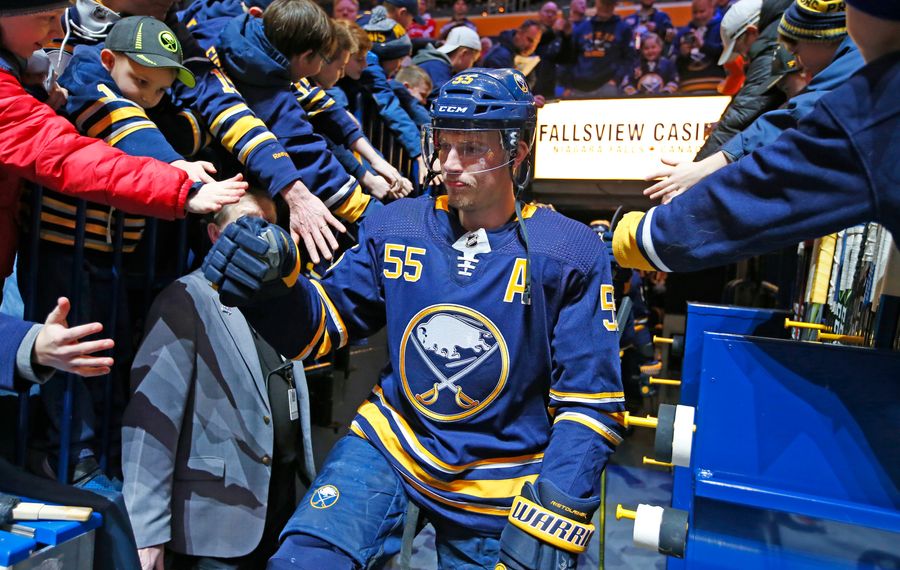 It's like captain Jack Eichel said last week in Chicago: Rasmus Ristolainen is under contract, so he'll be at training camp unless the Buffalo Sabres decide otherwise.

Ristolainen, who told a reporter in Finland last month he would prefer to move on after six years with the Sabres, was scheduled to arrive in Buffalo on Monday night and would likely take part in informal skates with his teammates over the next couple of days.

Barring any trade, he would then report to KeyBank Center for physicals and testing on Thursday and be on the ice Friday for the start of training camp.

"I know that it's going to be fun to work with a player with that skill and ability," new coach Ralph Krueger said Monday afternoon in Harborcenter after the Sabres closed their Prospects Challenge with a 6-4 loss to Pittsburgh. "I have nothing but excitement for working with him. I know there's a lot of potential there that's still untapped. It's up to me and the coaches to find out what that is."

"Our conversations with him have been positive," added General Manager Jason Botterill said  " I think 'Risto' has always been someone who comes to camp in extremely good shape and I think there's a good deal of adjustment for all of our players with a new head coach trying to put together exactly what coaches want, what they want from a systems standpoint and where they fit in with the group. I'm sure those conversations will go on with Risto and the entire team."

The Columbus Blue Jackets signed defenseman Zach Werenski to a three-year, $15-million contract on Monday but Botterill didn't know if that might open the logjam on restricted free agents – and thus create more market for player movement around the league. Ristolainen is coming off a season that saw him post an NHL-worst minus-41 rating, and he has three years left on his contract at $5.4 million per season.

Botterill, like most GMs this time of the year, was been seen around the building this weekend with his cellphone often planted on his ear.

"I think it's always busy but it's been good interacting with our staff because they're all here," Botterill said. "And I think there's excitement around the league just because we're back in arenas, we're back watching games so it's not always the distant conversations. We're actually seeing players and evaluating players again."

Botterill said defenseman Lawrence Pilut (shoulder) and goalie Ukko-Pekka Luukkonen (hip) will both sit out training camp as scheduled. Pilut's return date is likely around mid-October and Luukkonen is slated for early November, both dates being around what they were originally scheduled for when their surgeries took place in the spring.

Botterill also said the team has not ruled out bringing veteran winger Jason Pominville into camp, although it doesn't seem likely that will happen at the beginning as the team gets a look at some young players and newcomers like Jean-Sebastien Dea and Curtis Lazar.

"We'll continue to communicate with him the next couple of days here and make a decision on that," Botterill said. "I haven't ruled it out but like I've said, we're very excited where we are from a depth standpoint and the competitions we're going to have and we want to make sure we give those players enough of an opportunity."