Before the start of the Buffalo Bills season opener against the New York Jets Sunday, I tweeted: “Who doesn’t love listening to (CBS play-by-play man) Kevin Harlan’s voice?”

After the Bills’ once-in-22 years, fourth-quarter comeback victory, 17-16, I revised that tweet by asking, “Who doesn’t love Harlan’s voice talking about Bills resiliency?”

Bills fans can acknowledge that Harlan has a great voice and excitement level and is a pleasure to listen to alongside analyst Rich Gannon no matter how poorly their football team is playing.

And they may have felt Harlan’s summary of the game, after it was over, compensated for what was an up-and-down Josh Allen-like performance by CBS.

“What a way to begin the season,” said an excited Harlan with a little more than a minute left in the game. “Down 16-0 on the road, turning it over four times in the first half and coming back and showing resiliency."

The broadcast had some good moments and some head-scratching moments before Harlan raised his excitement level when the Bills win was assured: “They got it done. Wow.”

Bills' defense responds in tough times: 'We're built for this'

Some of the chief head-scratching moments were provided by Gannon, the former NFL MVP quarterback. 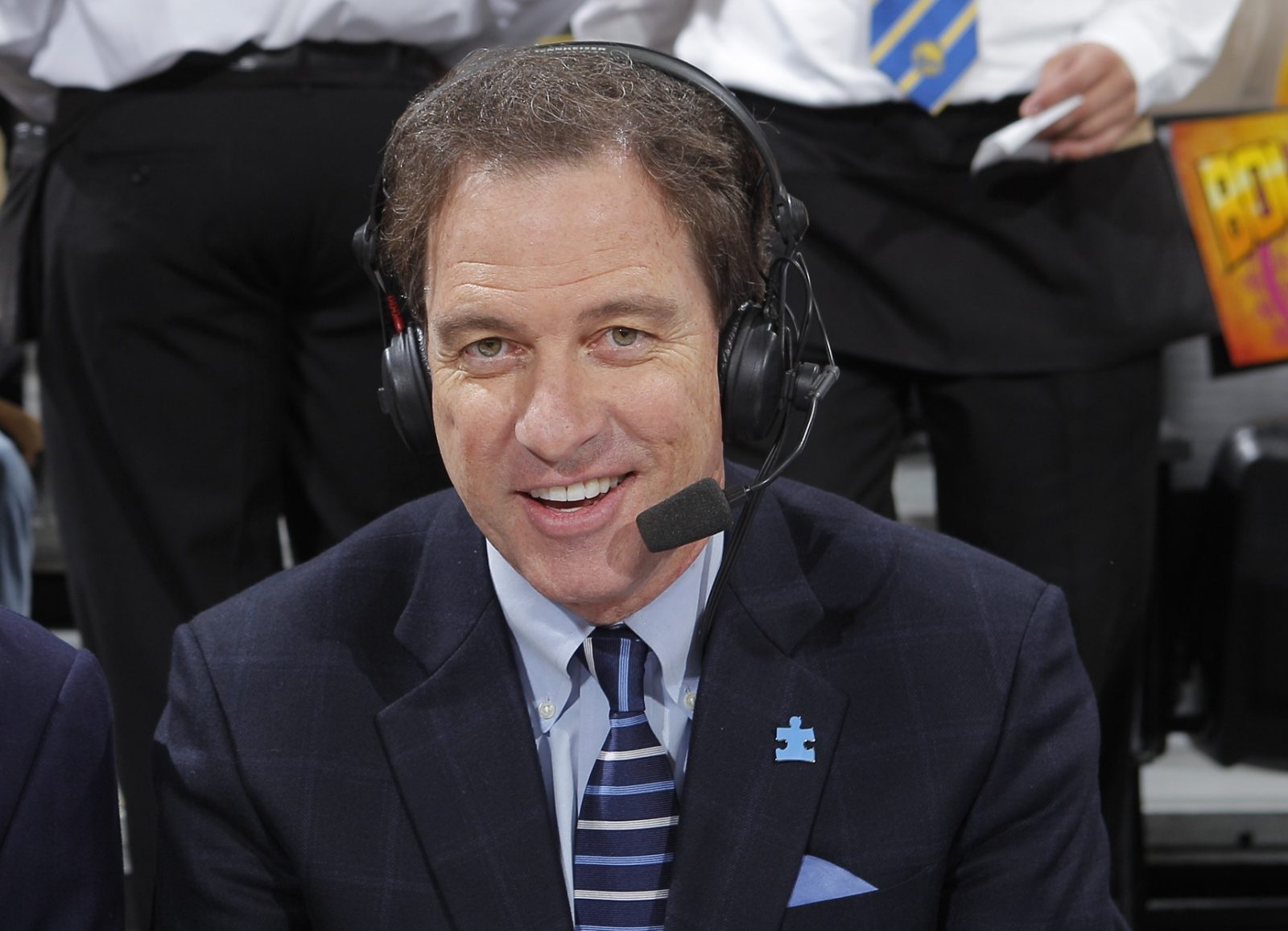 He confused Bills receiver John Brown with Jets receiver Josh Bellamy, likely because they both wear No. 15.

He said the Jets needed Allen to play all 16 games, when he undoubtedly meant the Bills needed him to do it.

He didn't appear to know a key pass interference rule.

But he had some good moments, too.

His best moment came when he suggested the Bills offensive coordinator Brian Daboll get away from calling short route passes and attack the Jets questionable cornerbacks. The Bills finally employed the strategy in the fourth quarter, when Brown scored the game-winning, 38-yard touchdown.

He also noted the Jets defense suffered after linebacker C.J. Mosley went out with a groin injury.

Gannon isn’t the most critical analyst and sometimes doesn’t have an opinion when one is expected and needed.

Notably, Harlan and Gannon didn’t discuss whether the Bills should have tried a long field goal rather than go for it on a short fourth down when Allen fumbled the snap and any chance of the play working.

Gannon also never questioned why it took so long for the Bills to give running back Devin Singletary some playing time before he had three big gains in the touchdown drive that brought the Bills within 16-10.

Gannon also tried to have it both ways on the Allen pass intended for Cole Beasley that was intercepted by Mosley for a pick six. Gannon said it was on Allen for throwing it low and away, but added Beasley should have caught it anyway.

He also tried to have it both ways when the Bills tried a quarterback sneak with 2 yards to go on third down that failed, saying it was a rare call but having a quarterback as big as Allen was rare, too.

CBS’ replay work was even more aggravating than Gannon’s inability to take a stand.

It never showed a taunting penalty that the referee and the announcers called against the Bills' Jon Feliciano, No. 76, that took the Bills out of field goal range. The replay it ran showed No. 26, Singletary, gently pushing Mosley after the Jet appeared to be taunting Allen after a tackle. It would have been preferable for CBS to have a replay of what Feliciano was doing. Without that replay, some wondered if the referee just got the number wrong. 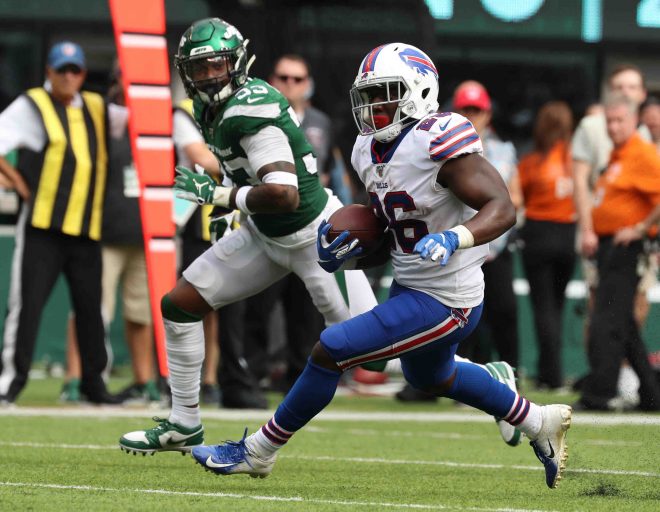 CBS also was late showing a replay that Gannon was addressing about whether a Jets touchdown reception would be called back because a tackle was illegally downfield. Gannon looked at the replay and thought the Jets receiver in the picture was in the right blocking position.

When the TV audience finally got the replay, CBS’ excellent officiating expert Gene Steratore explained the touchdown was overturned because the receiver Gannon exonerated started blocking past the allowable yard limit and was properly called for pass interference. Nothing was explained about whether a Jets lineman being downfield could be reversed on replay.

The Jets ended up scoring their only touchdown a few plays later anyway.

Steratore also was there to explain why the safety that occurred when Bills back Frank Gore was trying to get out of the end zone couldn’t be overturned. There was no visual evidence to see if he made it with the entire ball out of the end zone, Steratore explained.

Now on to more highs and lows of the broadcast and pregame show:

My Most Popular Tweet: “Allen just did a Jim Kelly and was able to forget about his four turnovers in first half and played a great fourth quarter. Somehow, I thought that might happen.” I had earlier tweeted that Kelly often played poorly for a while before winning in the fourth quarter. I was just comparing Allen to Kelly for one quarter, not anymore than that.

The 99% Solution: Near game’s end, Gannon noted that teams that turn over the ball four times on the road against their opponents (the Jets had one turnover on the last desperation play) have a 99% chance of losing. He was a little high; it was closer to 95%.

Graphic Details: At game’s end, CBS ran a graphic saying it was the first time the Bills had come back from being 13 points down since week four of the 1997 season against Indianapolis.

What Happened to the 10-Yard Rule?: At one point, Bills kick catcher Micah Hyde caught a punt on his own 5-yard line. In the old days, returners let kicks bounce inside the 10. The next time, he let a punt drop and the Jets downed it on the 2-yard line, which led to a Jets safety and a touchdown on the subsequent drive from the free kick. 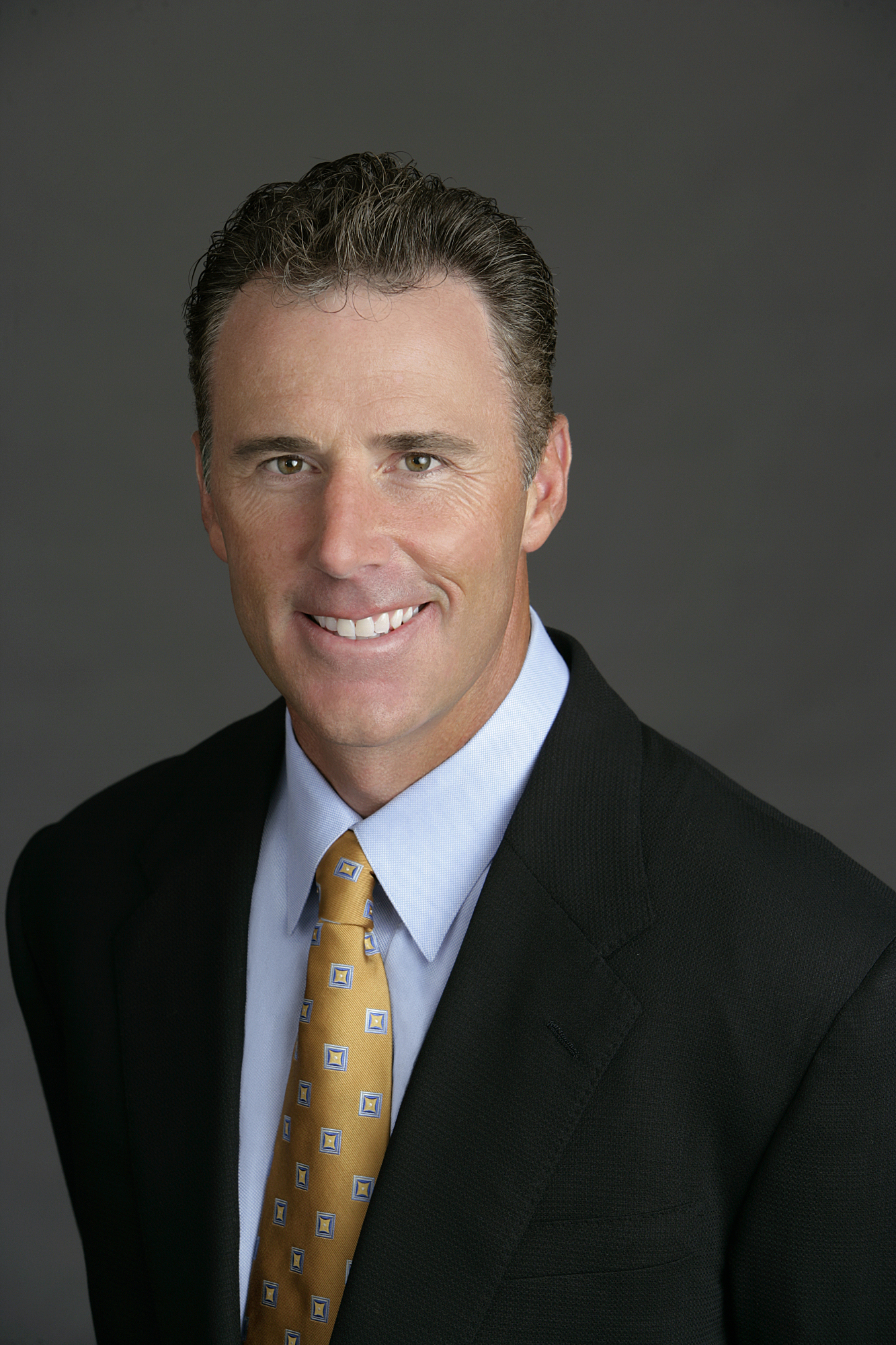 Gannon’s Strongest Comment: After Jets kicker (probably former kicker by now) Kaare Vedvik missed a field goal at the end of the half, Gannon said: “There is nothing worse than you don’t trust a kicker. They should have spent the money (to keep) Jason Myers.” The Jets had to be kicking themselves because they would have won with a decent kicker.

Bogus Early Graphic: CBS noted the Bills had one rush and 12 passes to start the game. But even the rush was an Allen scramble.

Scariest Stat: Harlan noted the Bills turned the ball over four times in their first six possessions. Two turnovers were on tipped passes.

Injury Report: Gannon praised Mosley for breaking up a potential Bills touchdown pass on the play that may have led to the linebacker’s groin injury.

Throwaway Line: Gannon praised Allen multiple times for throwing the ball away when he needed to rather than try to make a difficult play as he has done in the past.

Play It Again Sam: While Allen’s performance was being assessed, Gannon didn't really spend much time addressing the play of Jets quarterback Sam Darnold and why he rarely was allowed to throw downfield. On two of his rare downfield throws, Darnold underthrew Robby Anderson for what could have been a big gain and overthrew him on what could have been a winning touchdown.

Best Replay: While they missed the Feliciano penalty, at least CBS had a good replay of the hold that negated an Allen interception.

Bad Timing Award: Just as Gannon noted Allen’s maturity and his ability to change plays at the line of scrimmage, the quarterback ended the drive by fumbling under pressure.

Now for Something Completely Different: WIVB ran a humorous promo for meteorologist Todd Santos that played off the beer ad about "the most interesting man in the world."

A Peterman Reference: After a graphic about Allen’s four turnovers being the worst first-half performance by a quarterback since former Bill Nathan Peterman in week 11 of the 2017 season, Gannon noted: “Not a guy Buffalo fans think of in the greatest way.”

Ouch: During the pre-game show "The NFL Today," Bills fans were “treated” to both Scott Norwood’s wide right in the Super Bowl and the Music City Miracle that cost the Bills a playoff game in Tennessee. Norwood’s kick came in a nice pregame piece about Super Bowl hopes springing eternal in the 12 franchises that have never won one.

Best Cameo: In the Super Bowl piece, restaurateur and philanthropist Russell Salvatore said of the Bills eventually winning a Super Bowl: “I’m ready to go to the grave for God’s sake. I wish they would hurry up and do it.” Even after this “wow” win, most NFL experts believe there is a 95% to 99% chance Salvatore will have to wait at least another year. But, hey, the Bills proved Sunday they can beat the odds.