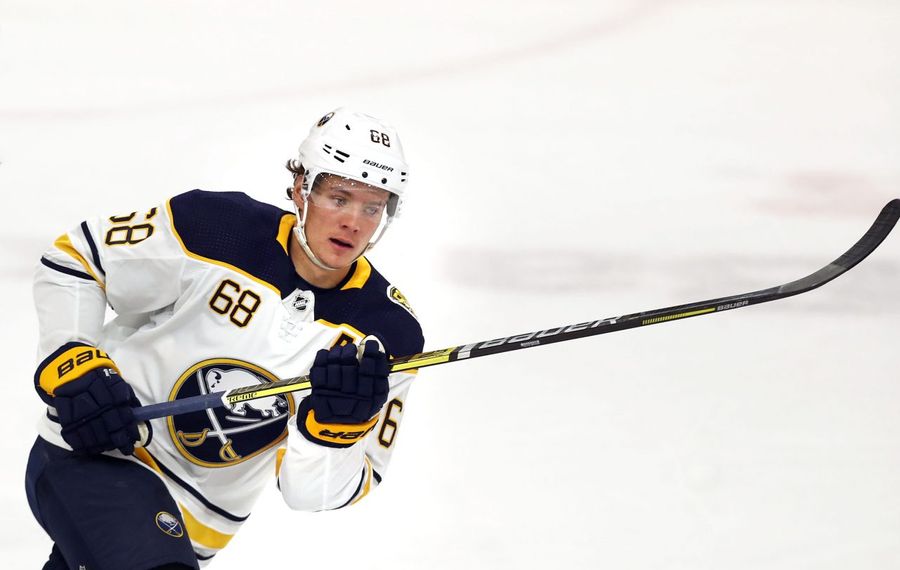 Casey Fitzgerald was one of the Buffalo Sabres' best players all weekend at the Prospects Challenge. The 22-year-old defenseman from Boston College skates and passes well and can move the puck out of his defensive zone, three points of emphasis for young blueliners in this organization.

In Monday afternoon's game against Pittsburgh, he also made a statement with his fists that gave his team lots of momentum.

The Sabres dropped the final game of the tournament, 6-4, but not before wiping out a 4-0 deficit with a buzz acquired from Fitzgerald's beatdown of Penguins forward Anthony Angello late in the second period.

"That was a good fight. I thought I'd get the boys going and get some energy," said a smiling Fitzgerald. "We've got a big hockey family so there were many fights there back in the day."

After a collision at center ice, Fitzgerald took a couple early shots from Angello before roaring back with a series of right uppercuts that drew big cheers from several hundred fans attending the Harborcenter matinee.

"There was a lot of energy going on the bench and I'm glad I could play my role and give that spark if we needed it," said Fitzgerald, a 2016 third-round pick who made his pro debut in April in Rochester and should be back with the Amerks this season.

Fitzgerald is the son of former NHLer and New Jersey assistant GM Tom Fitzgerald, who was in the building after watching his team play the day's opening game. What did dad say about the fight?

"He just said, 'Good scrap. You didn't get that from me. You got that from your mother.' " Casey Fitzgerald said.

Falling behind, catching up: There was no scoring in the first period but the Penguins took a 4-0 lead with a barrage of quick strikes in the first 9:05 of the second period, including two goals from Angello. Brett Murray opened the scoring for Buffalo at 18:05 and the Fitzgerald fight was 12 seconds later.

The Sabres pulled within 4-2 on Dylan Cozens' goal with 1.8 seconds left in the second, a tip-in of an Henri Jokiharju shot, and roared from the gate in the third.

The final 20 minutes: Victor Olofsson hit the crossbar in the opening minute but Rasmus Asplund scored at 1:36 and tied the game on a short-handed goal at 3:41 with a wicked laser from the left boards. The Penguins, however, regained the lead on Nathan Legare's power-play goal 16 seconds later and put the game away on an empty-netter in the final minute.

In the lineup: Both teams had strong rosters, with the Penguins playing many of their NHL players and the Sabres using virtually all of their top prospects at the tournament. The only notable Buffalo scratch was defenseman Will Borgen. Asplund centered Buffalo's top line between Matej Pekar and Lukas Rousek. No. 1 draft pick Cozens was between Olofsson and free agent Kyle Olson.

In the net: Matthew Welsh, an undrafted free agent from Charlottetown of the Quebec League, went the route in goal for the Sabres. He stopped 24 of 29 shots.

Team records: The Sabres and Penguins both finished the tournament at 2-1. New Jersey was 1-2 while Boston went 1-1-1. Earlier Monday, New Jersey beat Boston in overtime, 3-2, as Ludvig Larsson scored the tying goal with 8.1 seconds left in regulation and the winner at 2:04 of overtime. No. 1 overall pick Jack Hughes did not have a point for the Devils.