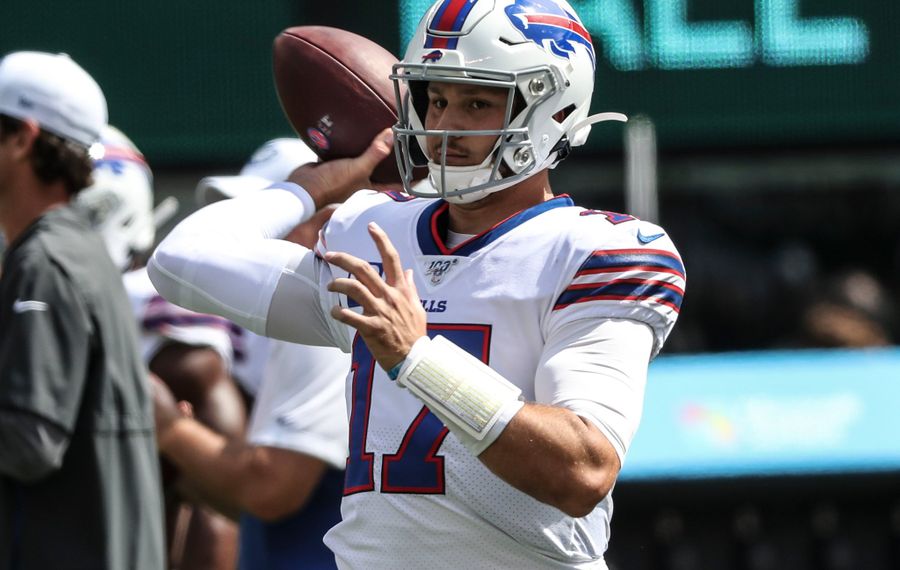 Theme: Ball security is an issue. The Bills tied for the third most giveaways in the NFL last year and opened the first quarter with two turnovers. They were lucky to be down only one score.

Key drop: Cole Beasley let a short pass over the middle bounce out of his hands. It caromed into the arms of Jets' linebacker C.J. Mosley, who returned the interception 17 yards for a touchdown.

Lineup note: The Bills kept 10 offensive linemen on the roster (one more than the past two years), but there were seven active (as usual) on game day. With Andre Roberts out, Isaiah McKenzie was the kickoff return man.

Zebra report: The Bills cost themselves a field goal try when guard Jon Feliciano was called for unsportsmanlike conduct after a third-down play when Josh Allen had scrambled to the Jets' 25. It would have been a 42-yard field-goal attempt. Feliciano gave a shot to Jordan Jenkins at the end of a play, which looked like a clean hit.

Theme: When does a 6-0 halftime deficit feel almost like a lead? When you’ve lost the turnover battle 4-0. The Bills were fortunate to be trailing by just six points.

Shank you, very much: Norwegian-born kicker Kaare Vedvik was a worry for the Jets entering the game, and he proved all the fears were real. Vedvik missed the first extra-point try by doinking it off the left upright. Then at the end of the half, he shanked a 45-yard field-goal try so far right it almost hit the play clock 20 yards right of the goal post. The Vikings traded a fifth-round pick to Baltimore for Vedvik in August but then cut him after he performed poorly. The Jets claimed him off waivers.

Missed chance: The Bills had a screen pass to Devin Singletary well set up on a third-and-8 play from the Buffalo 40 early in the quarter. But Singletary dropped it.

Second guess: It looked like Josh Allen checked to a quarterback sneak on a third-and-2 run play from the Jets’ 37. It was an odd play because the center was covered by the Jets. Granted, the Bills knew they were going for it on fourth down. But it didn’t work because the fourth-down snap was fumbled.

Theme: Bills can’t get out of their own way.

Key play: The Jets did a good job of slanting on the left side of the Bills’ line and crashing a defensive back to get a safety of Frank Gore with 11:52 left in the quarter. It gave New York an 8-0 lead.

Tough assignment: Bills linebacker Matt Milano couldn’t quite keep up with Le’Veon Bell on the 9-yard TD pass to the Jets’ back on a third-and-goal play.

Matchup watch: The Bills didn’t match up with Jets' deep threat Robby Anderson. Cornerback Tre’Davious White stayed on the left side of the defense, and Levi Wallace stayed on the right side. The Jets did not try to throw downfield much against the Bills’ tough pass defense.

Unsung: Jets' punter Lachlan Edwards hit a perfect, high punt of 4.7 seconds of hang time to allow his coverage team to get downfield and down it at the Bills’ 2, setting up the safety.

Zebra report: Jordan Phillips was flagged for a personal foul on Sam Darnold on the Jets’ TD drive. It wasn’t late, but Phillips hit the QB too low.

Theme: At the risk of overstating, it was a comeback for the ages.

Play of the game: Josh Allen’s 38-yard TD pass to John Brown with 3:00 left gave the Bills the victory.

Good coaching: Sean McDermott called time out before the Jets’ fourth-and-10 play with 1:17 left. It either gave the Bills a preview of the Jets' formation or forced the Jets to go to a different play, which they likely didn’t love as much.

Second guess: The Bills are great at preventing deep passes. But Adam Gase should have bunched up, run play-action fakes and used Sam Darnold’s big arm to throw deep a little more often.