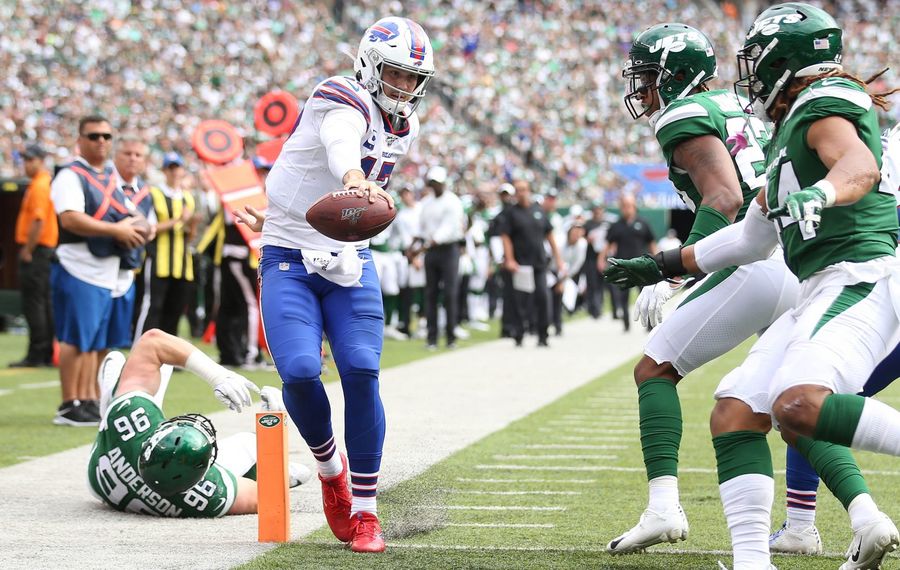 EAST RUTHERFORD, N.J. – The Buffalo Bills' defense spent most of Sunday trying to bail out the offense.

More specifically, it was trying to rescue the season-opener at MetLife Stadium from the ineptitude of Josh Allen.

After being fully or partly responsible for four turnovers and nearly throwing a third interception in the first half (a potential fourth was dropped in the second half), Allen owed his defensive brethren. Big time.

The reciprocation finally came after the Bills, trailing 16-10, took over at their own 20 with 5:55 left in the game. Using his exceptional running skills, which had already provided a touchdown early in the fourth quarter, and an arm that repeatedly delivered errant throws in the first two quarters, Allen marched the Bills to the Jets' 38. From there, on third and 4, he found John Brown deep down the left sideline for the winning touchdown in a 17-16 victory that seemingly had no chance of happening.

What did Allen's second-half rebound, culminating with the fourth comeback of his young career and the biggest for the Bills since 2011, tell tackle Star Lotulelei and the rest of the defense about their quarterback?

"Nothing we didn't already know," he said.

"Exactly what he showed us today," Lotulelei said. "He's a fighter and he's a winner."

For a half, Allen wore far different labels as the Bills went all in with their quarterback (and he went all in on himself with some checks) by throwing passes on their first 17 plays. Jittery. Impatient. Overwhelmed.

And the most familiar and troubling of all – inaccurate.

It was the worst possible start for what is supposed to be a season of hope, riding largely on Allen's development that presumably would be accelerated by the many offensive additions made in the offseason.

For a time, however, it looked as if he had taken backward steps while sharing the same stage as another member of the Quarterback Class of 2018, the Jets' Sam Darnold.

"I put the ball in a couple of spots where it shouldn't have been," said Allen, who completed a career-high 24 of 37 passes for a career-best 254 yards. He had two interceptions and a pair of fumbles in the first two quarters. "We got lucky with some and some we didn't, went the other way."

The reference was his low throw that deflected off the hands of Cole Beasley and into those of linebacker C.J. Mosley, whose 17-yard TD return gave the Jets a 6-0 lead.

That was how the score stayed at halftime, during which coach Sean McDermott felt "the morale was up" and if the team had a stop at the beginning of the second half, "we'd be right back in the game."

"We sat in the locker room thinking this is the worst it could have gone and we're sitting there down six points," Allen said. "We understood that we still had a shot in this game. Nothing is going to be too crazy to overcome."

Nevertheless, after stopping the Jets on the opening possession of the second half, the Bills added to their misery when running back Frank Gore was tackled for a safety to make it 8-0.

No one would have blamed Buffalo's defenders if they began to have some doubts in the guys on the other side of the ball. They also seemed to buckle a bit under the load of the team, as the Jets took the free kick and drove 60 yards to a Darnold touchdown pass and two-point conversion throw to new running back Le'Veon Bell to put the Jets ahead, 16-0.

Still, the defense maintained the belief that Allen could come through.

"He's a competitor, man," safety Micah Hyde said. "He has that gunslinger mentality. He's going to make some mistakes. But we have faith in Josh. He's our quarterback."

Allen made his greatest effort to gain composure before the winning drive. By then, he and offensive coordinator Brian Daboll had a better grasp of the variety of blitzes and coverages defensive coordinator Gregg Williams was calling. It helped, too, that Mosley was out with a groin injury.

"I was just trying to stay as calm as possible," Allen said. "I knew the situation and the task at hand. Coach McDermott does a great job with situational football. We've probably had that situation a handful of times in practice.

"I settled in, really, in the fourth quarter. I felt like I just kind of calmed down. I was letting things come to me instead of trying to force things."

That was particularly true on his scoring strike to Brown. Allen knew the aggressive tendencies of the Jets' safeties, so he made a point of glancing to his right to help pull them away from Brown.

"I had to stay in there a little longer," the quarterback said. "A couple guys (were in) my face there. John made a heck of a play."

One game might not make or break the season, but this one figures to have done plenty for Allen's confidence.

"You always want to be able to say you've done it one time, right?" McDermott said. "To bring a team back, not only a home, but also on the road, a division opponent. I think that's a résumé builder, if you will. That's good stuff."

For the longest time, however, the Bills' defense was cleaning up a lot of bad stuff.