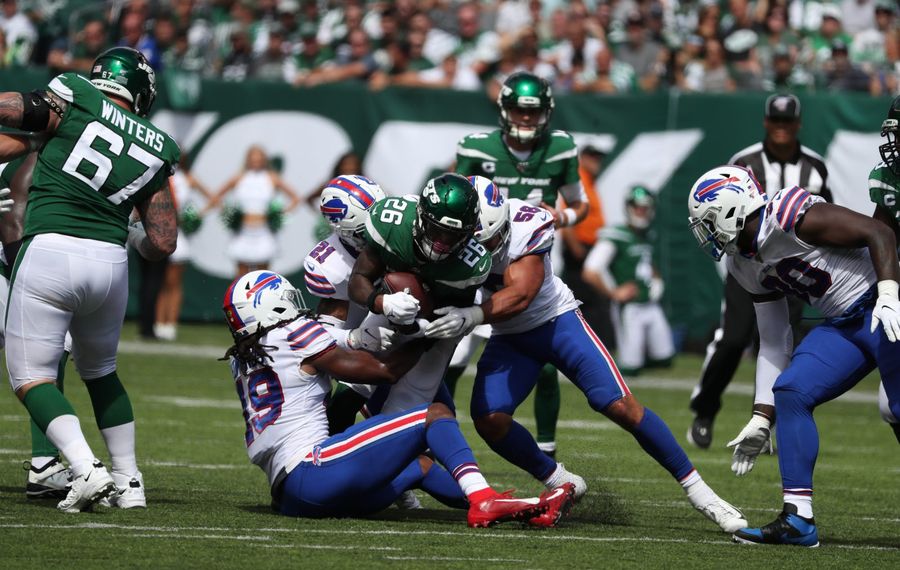 EAST RUTHERFORD, N.J. –  The Bills’ defense has been in situations similar to the one it faced in Sunday’s opener against the New York Jets, only to suffer defeat. And it has been in games that have snowballed out of control.

Visions of turnover machine Nathan Peterman and the blowout loss in last year’s season opener at the Baltimore Ravens come to mind.

But this group understands that, with 10 returning starters, the defense is the Bills’ established entity while the offense, with myriad changes, will need some time to develop. And the defense not only responded to the challenge of four turnovers by the offense and a 16-0 deficit, but relished it.

“It’s kind of weird,” safety Micah Hyde said. “When the offense turned the ball over a few times, the defense would huddle up before we went on the field, and dudes are smiling, like, ‘Hey, we’re built for this.’ Kind of like a weird-type smile. There are some creepy, crazy dudes on this defense, and we take pride in those opportunities.”

The Bills' defense allowed no points off those turnovers and kept Buffalo in the game long enough for the offense to rally for a 17-16 victory.

Quarterback Josh Allen delivered the unlikely win, piloting 85-yard and 80-yard touchdown drives in the fourth quarter after Jets linebacker C.J. Mosley, who opened the scoring with a pick six, left with a groin injury.

“I never really looked at the scoreboard,” said first-round pick Ed Oliver, the lone new starter on defense. “I just knew some way, somehow, we were going to get it done, and that’s what we did.”

Shaq Lawson even called it, after Jets kicker Kaare Vedvik clanged an extra point off the left upright and missed a 45-yard field goal.

“When buddy missed that field goal, I said this game’s going to be 17-16,” Lawson said. “And I told everybody.”

Lawson had one of the Bills’ four sacks against Sam Darnold, who completed 28 of 41 pass attempts while being limited to 175 yards and one touchdown.

The lone score came on a nine-yard completion to Le’Veon Bell, who also hauled in the two-point conversion on a ridiculous play that Darnold extended before heaving the ball into the back of the end zone.

“Sam does a great job of getting out of the pocket and much like a Russell Wilson type, still is looking down the field where it allows his playmakers and receivers to really turn it into backyard football,” Lorenzo Alexander said, “and so we really wanted to get him uneasy within the pocket, but keep him in the pocket.”

The touchdown and conversion gave the Jets a 16-0 lead with seven minutes remaining in the third quarter.

It was the Jets’ first and only offensive score of the game. The Bills’ defense remained unfazed.

“The way the first three quarters unfolded, I was surprised to see the upbeat attitude guys had, especially once the Jets scored their first touchdown in the third quarter,” Jerry Hughes said, pointing to Allen’s leadership.

“Our quarterback was calm, cool and collected. He never wavered. He inspired a lot of us on defense and I’m sure he gave a lot of those offensive guys a lot of energy and juice, and that’s what you want out of your quarterback.”

The Bills never allowed a play of 20 yards or longer.

They didn’t allow a 100-yard receiver.

Bell, in his first game in a Jets uniform, was held to 60 rushing yards on 17 carries, an average of 3.5 yards per touch.

Hughes led the pass rush with 1.5 sacks, teaming with Alexander for one takedown, and Jordan Poyer also dropped Darnold on a safety blitz.

In addition to the four sacks, the Bills racked up nine quarterback hits, eight pass breakups and five tackles for loss.

By midway through the third quarter, the Jets' win probability was 97.4%, according to ESPN. So it should be obvious, the Bills can't continue to win games when the offense commits four turnovers and has to overcome double-digit deficits.

“We have a special group,” Alexander said. “I think guys stayed together. I think it shows the maturity of Tremaine (Edmunds), staying calm, still being able to communicate, not allowing other things that we can’t control affect the way we go out there and approach it. So I thought he did a great job of just leading the guys, keeping them calm, every time we had a turnover, bringing the guys into the huddle, just refocusing us. That went a long way.”

The experience and confidence boost should go a long way the rest of the season.

“We always talk about ‘calm breeds calm,’ ” Poyer said. “So all those situations that we got put in, sudden-change situations, nobody was panicking. We like being put in those situations. We feel like we’re built like that – to be able to be put in bad situations and get our team out.”