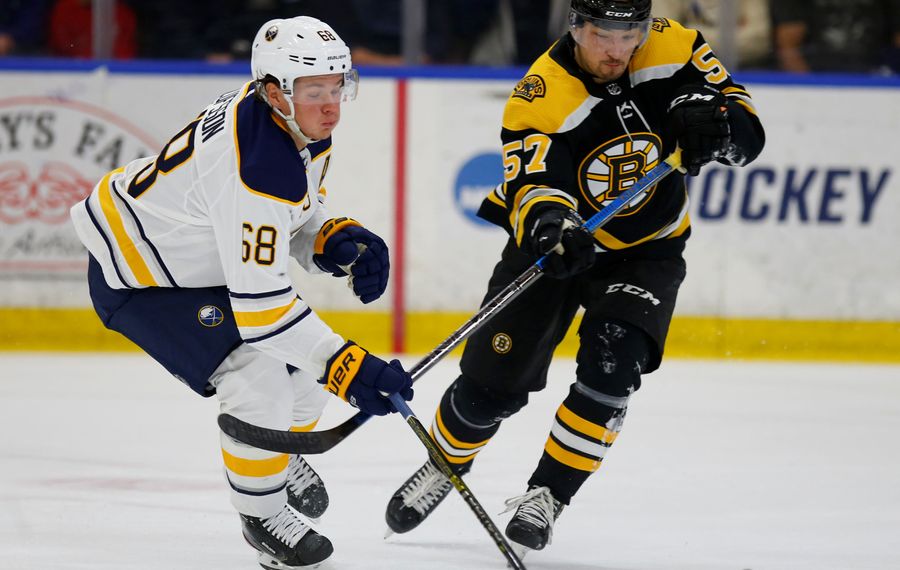 Victor Olofsson's shot that rang off the crossbar and went into the back of net Saturday night might have given new Sabres coach Ralph Krueger a few ideas ahead of training camp.

Olofsson, a 24-year-old winger drafted in the seventh round in 2014, used his trademark quick release and accurate shot to score a power-play goal in the second period of a 4-3 win over the Boston Bruins in Harborcenter.

The goal, Olofsson's second in as many games during the Sabres' Prospects Challenge, occurred at the spot on the ice in which he had so much success during his first season in North America: the right-wing circle. That happens to be a perfect match for Jack Eichel, who likes to run the Sabres' power play from the left circle.

"I like that a lot for sure," Olofsson said of the right circle. "Just trying to get as many shots off as I can and luckily one went in today."

Many of Olofsson's 30 goals in Rochester last season were scored from the right side. Opponents took notice. During the Amerks' first-round playoff sweep in April, the Toronto Marlies made a concerted effort to prevent Olofsson from receiving the puck in the circle.

The Bruins didn't have the same game plan. Olofsson was given plenty of space to one-time a pass from Jacob Bryson into the back of the net at 12:23 into the third period for a 2-1 lead.

Any breakdown in coverage typically led to a shot ringing off the post, as Olofsson was held scoreless during all three playoff games. Speculating on a power-play role in Buffalo is likely premature given Olofsson must first win a roster spot in what should be one of the more competitive Sabres training camps in recent years.

"I think I just feel like I get a little head start, get into the pace of the game and find the timing," Olofsson said. "It’s a little bit off after a long summer. It definitely feels nice to get a couple games in for sure."

However, Olofsson has proven to be more than a scorer. He has evolved into a two-way player by breaking up passes in the defensive zone and becoming a reliable penalty-killer. The Sabres' power play ranked 16th in the National Hockey League last season, and the man-advantage is an area of expertise for Krueger.

"I thought he played really well," Rochester coach Chris Taylor, who is behind the bench for the Sabres during the Prospects Challenge, said. "He controlled the puck well and did a lot of nifty little plays. Obviously his goal was remarkable. He can shoot the puck. But I liked the other parts of his game as well."

Marchand-like: Matej Pekar has drawn comparisons to Bruins winger Brad Marchand because both players love to get under an opponent's skin. Like Marchand, Pekar also has some serious skill.

Pekar, a 19-year-old forward, scored two goals during his second Prospects Challenge game, including one on a beautiful pass from recent Sabres draft pick Lukas Rousek, and got into a few more scuffles with opposing players.

Asplund again: Rasmus Asplund is likely not ready to push for a roster spot with the Sabres. Remember, he's only 21 years old and has played only one season in the American Hockey League. Despite committing the occasional turnover, Asplund is starting to show he has some serious upside on offense.

Asplund looked calm with the puck in the offensive zone Saturday, patiently waiting for his linemates to find time and space. He also showed maturity during his goal in the first period. Rather than showing frustration following a neutral-zone turnover, Asplund helped lead a rush the other way and scored on Andrew Oglevie's rebound at 5:21.

Another defenseman: The Sabres may have trouble keeping Will Borgen in Rochester for long. The 22-year-old defenseman was among the best prospects on the ice Saturday, as illustrated by him standing up Bruins winger Cameron Hughes during a 1-on-1 in the first period.

The play prevented Hughes from taking a shot on goal, allowing Jonas Johansson to cover the puck. Borgen also assisted on Asplund's goal and his physical play stood out.

Better showing: Brett Murray is trying to earn a contract with Rochester this weekend after he scored 41 goals with Youngstown of the United States Hockey League last season.

Murray, a 6-foot-5 forward, made a nice reverse hit on Dylan Cozens' second-period goal Friday but appeared a tad slow for much of the game. However, Murray had a much better game against the Bruins, looking much faster and using his size to win battles for loose pucks.

Murray won't be a top-six forward at the next level, so he needs to show he can be a checking-line player. Another performance like this should be enough to earn him an invite to the Amerks' training camp.

Night off: Neither center Cozens nor Henri Jokiharju were in the Sabres' lineup Saturday night, as they were given the day off after playing in the team's 6-4 win over New Jersey on Friday. Defenseman Kurt Gosselin also sat out against the Bruins, with Devante Stephens, Stephen Harper and Tobie Bisson drawing in to the lineup.

Luukkonen, 20, underwent hip surgery in April and has spent much of the summer in Buffalo working with goalie development coach Seamus Kotyk and Dennis Miller, the team's head of rehab and development.

Final games: There won't be any Prospects Challenge games Sunday, and the event ends Monday with New Jersey facing Boston at 9:30 a.m., followed by the Sabres playing the Pittsburgh Penguins at noon.