The Cave of the Winds has been plagued by rockfalls through its history, as recently as 2012.

But in 1920, rocks falling behind the cataracts turned fatal.

The original attraction wasn’t the winding wooden staircase visitors see today, but a cavern with a natural rock ledge behind the Bridal Veil Falls. It opened in the mid-1800s to tourists and quickly became a popular destination.

Cave of the Winds photo from the George Barker collection, estimated to be taken circa 1850. (Photo courtesy of the New York Public Library's Digital Collections)

On Sept. 6, 1920, a rockfall occurred and boulders crushed a group touring the Cave of the Winds. Three people were killed: Joseph Hartman, 37; his wife, Louise Hartman, 26, of Brooklyn; and Clara Faust, 22, of Pittsburgh. Two others were injured, and many others narrowly escaped harm.

An article in the Sept. 7, 1920, edition of the Buffalo Evening News details the tragedy and the daring recovery that followed.

"A mass of shale rock, estimated to weigh five tons, crashed down and forced out the fourth bridge leading to the old Biddle stairway at the Cave of the Winds. ... In recovering the bodies of the victims, a daring feat was performed in the running of a rowboat from the steamer Maid of the Mist, close up under the falls and cave. This was done by members of the Maid's crew who risked their lives for the purpose."

Tourists watched the chaos as the tragedy and rescue unfold. Harold Wright, the Cave of the Winds' superintendent, said at the time that the incident was the first of its kind.

The Cave of the Winds attraction was closed for several years after the tragedy, reopening in 1924.

Today, the Cave of the Winds isn't really a cave. It's an intricate maze of wooden decks and staircases at the base of the Bridal Veil Falls, bringing tourists very close to the mighty wind and spray.

Read the full article from 1920 below. Click to enlarge the image. 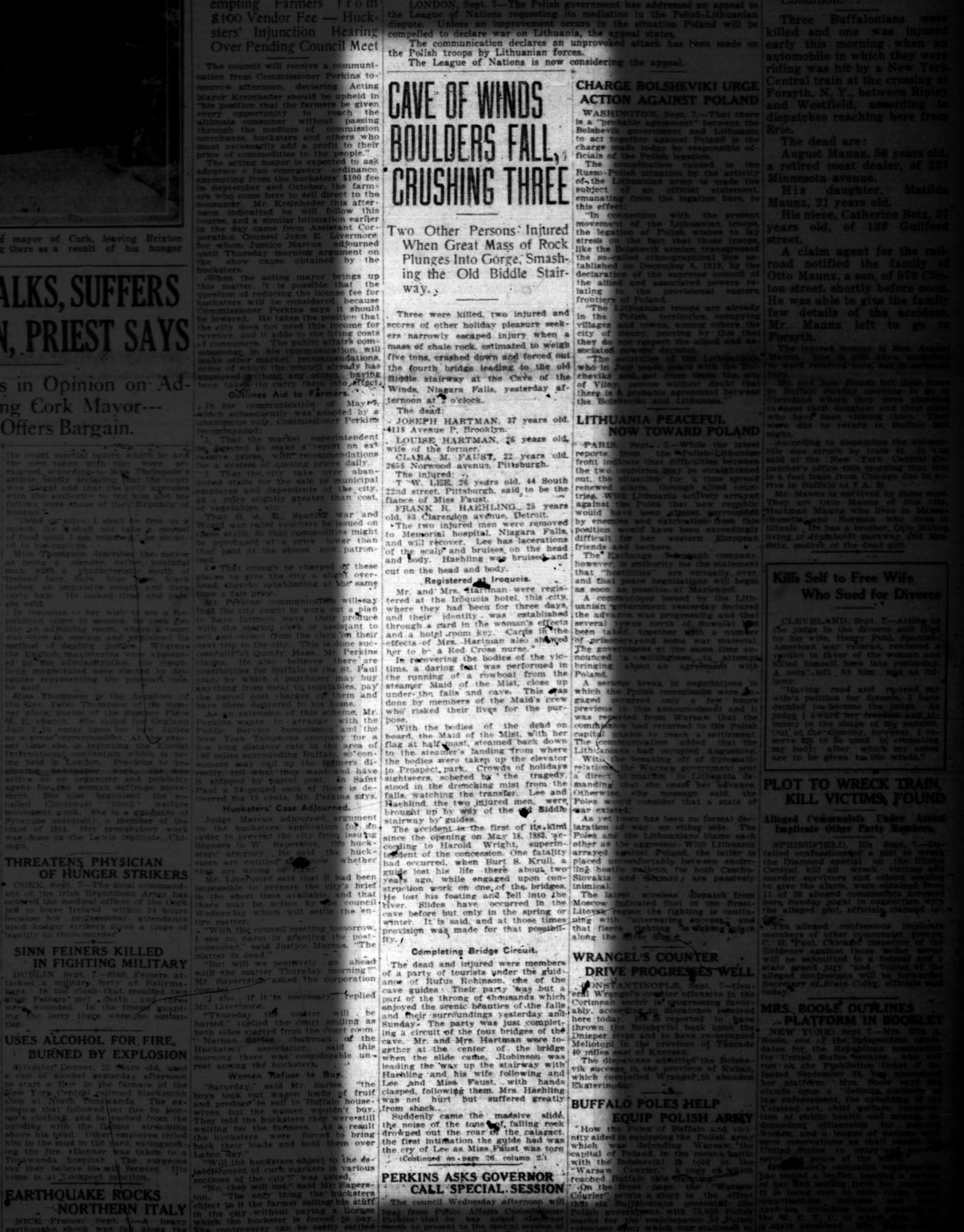 [Gallery: What it takes to build the deck at the Cave of the Winds]

• In 1912, Niagara Falls ice bridge cracks, and three are swept to their deaths