The first really loud ovation to escape the lips of the thousands of Lancaster football fans in attendance at Foyle/Kling Field on Friday night came for the oldest living Legend in the house Larry Schalberg.

The younger ones earned their fair share of cheers, too, soon thereafter as the 100th opener in team history was a rocking experience that gave the black and red’s faithful reason to think this once again could be Lancaster’s year.

Returning first-team All-Western New York linebacker Conor Mahoney had a pick-six to lead a hard-hitting effort by a Legends’ defense that forced five turnovers, knocked out Hutch-Tech’s starting quarterback and limited the Engineers to 89 yards.

A happy celebration for sure, that continued into the night with an alumni gathering filled with football stories, pizza and snacks at the nearby Elks Lodge.

“It motivated all of us,” Jurkowski said of the 100-year hoopla. “It’s something you can’t really speak of as not a lot of people have it like this.”

The celebration of football began early with Channel 7 in the house broadcasting parts of its early evening newscasts from the field.

It picked up in earnest as alumni of all ages, including former cheerleaders, gathered in the north end zone in front of Lancaster’s locker room roughly 30 minutes before the opening kickoff to be introduced in groups divided by various years. Special recognition was showered upon teams that won championships, but 92-year-old Schalberg – Class of 1946 – heard the loudest cheers after being introduced last.

He basked in receiving the rock star treatment that began as alumni gathered, showing off his Lancaster football tattoo on his left forearm, a program from the year he helped the team win a championship and a little gold football charm he planned to donate to the school he received in recognition of that title.

Why is he giving that back to the school?

“I’m afraid that if I keep it at home, when I die it’s going to go out someplace and you never know where,” he said. “I’d rather have it in the school forever.”

“I think this is great,” continued Schalberg, who took part in a similar celebration 50 years ago. “For me it’s wonderful. It brings back a lot of memories.”

The man coached by John Java and Herman Fling was part of a formidable backfield that led the 1945 team to a championship. How good was Schalberg? The Lancaster Enterprise wrote: “Stopping [Harold] Simme and Schalberg would have taken a village ordinance.”

“That’s insane. I didn’t know that was our oldest alumni. It was nice to see him get out here,” said 2017 graduate and current Milwaukee Brewers prospect Leugim Castillo.

Castillo, a member of the 2016 Section VI championship football team, didn’t participate in the pre-game ceremony – opting to watch it from the north end zone with several other Lancaster fans.

Jurkowski met Schalberg earlier this summer and shook his hand during pregame warmups when he saw him. The moment proved to be inspirational, he said.

“That was really cool,” said Jurkowski, who also recorded an interception. “That (ceremonly) really motivated us.” 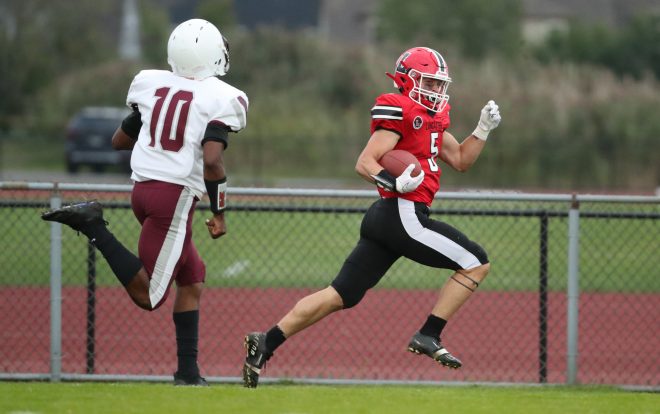 Current head coach Eric Rupp along with assistants Brian Wild, Sean Bruso and Dave Mansell all played for Lancaster. They took part in their own way, with Rupp greeting folks at midfield with a handshake instead of running out with the 1990s crew.

Of course, venerable coach Joe Foyle, who still serves as an assistant at age 94, watched. An Ithaca High graduate, he’s coach sports at all levels at Lancaster since 1951.

“It’s my whole life. I love it,” Foyle said. “Great memories. They come back and talk to you. It means so much to them (their experience playing here). The camaraderie and the stories keep coming back bigger and better.”

The win means Lancaster is now 30-1 against Section VI teams during Rupp’s tenure. Getting the ‘W’ on such a grand occasion meant a lot to the team and its fans.

“It’s a big year for us,” Rupp said. “To see some of the guys it was just a special evening. I’m just glad we were able to get the win for all of our alumni.”

“Football has been here for so long and it’s such a great program, I think everybody just takes pride," said 1983 Lancaster graduate Bill Augustine. "When you get here the school just pushes that on you. It’s almost inbred. I think anybody that goes here, if you talk to anyone who is a Lancaster Legend or Redskin they would just tell you it’s something you take an enormous amount of pride in all you do. That’s just how the community is.”