When Christine Burnett talks about how she and her husband, David J. Hickok, went about fixing up their turn-of-the-century Buffalo home, she refers to a tip from HGTV/DIY Network star Nicole Curtis: Rather than following the latest trends, stick with a classic look that matches the era of your home.

That’s exactly what they did – whether it was scooping up a dining room chandelier from an antiques shop, having original woodwork in the dining room professionally revarnished or choosing wallcovering that reflects the period of the home, which was built in 1897.

Highlights include leaded glass windows; a wallpapered coffered ceiling, which consists of beams arranged in a grid; original hardwood floors; multiple window seats; a split staircase, in which the first flight of stairs leads to a landing and then divides into two symmetrical flights; two decorative fireplaces; a garden room with original tin ceiling, and remnants of what were once servant call buttons.

Their home is one of 10 scheduled to be on Explore Buffalo’s “Autumn Tour of Homes: Colonial Circle” on Sept. 28. (See explorebuffalo.org for details.)

The first resident was Theodore Garwood Lewis, Burnett said. He lived in the home with his wife, Catharine M. Lewis, for more than 20 years. According to one obituary, he practiced dentistry with his father and later his brother. He also maintained an amateur orchestra which he conducted in his home and gave hospital concerts. He died in 1920.

The couple furnished their home with pieces that complement the interior – including furniture and accessories that have been passed down from family. It’s the woodwork and other architectural features that stand out, however.

They bought the house for $125,000 in 1992, moving from a double on the West Side, and have invested more than that in it through the years. 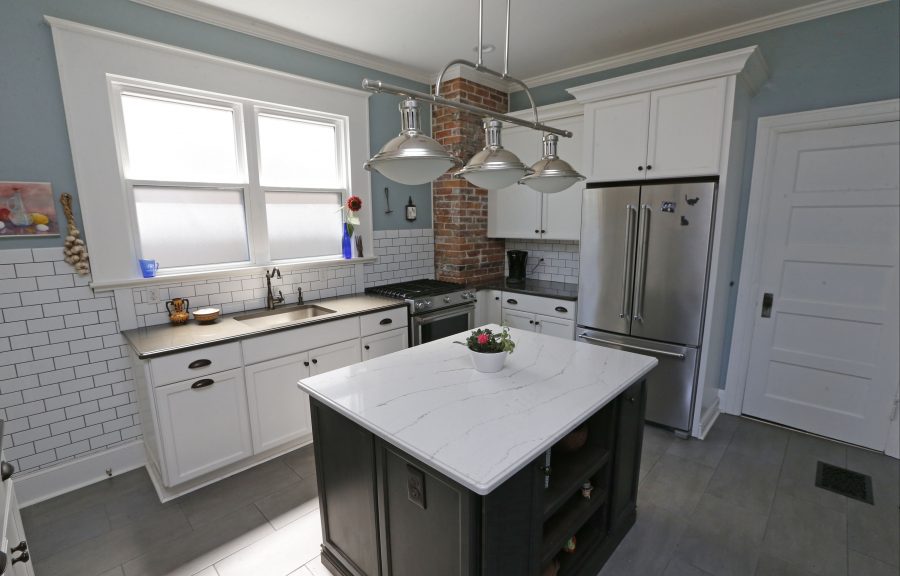 • The kitchen was remodeled about three years ago by Artisans Kitchens and Baths. Features include white cabinets, quartz countertops, stainless steel appliances, subway tile backsplash, a heated gray tile floor and a 36-inch round wooden dining table. They kept one wall of cabinets, in which they display china from both sides of the family on open shelves.

While they have a new stainless steel refrigerator, they kept an old built-in Frigidaire model, probably from the 1930s, as well.

• The woodwork in the dining room had been scratched up by a former owner’s dog, so the couple had it professionally revarnished. The window seat also was repaired because the surface had water damage from houseplants.

• While most of the original windows remain, some had to be restored, including the leaded glass window on the landing of the staircase. Windows on the third floor were replaced. They also replaced the furnace and had electrical work done, said Hickok, who retired from Central Police Services, where he did computer programming.

• The master bath has been remodeled although the windows are original and they kept the Jacuzzi. A carpenter made matching cabinetry for either side of the tub and also built the medicine cabinet. The shower, tile and fixtures are new, but the original door hardware was refurbished to a stately silver.

Outdoors, a porch extends across the front of the house and is furnished for summer relaxing – including a hammock.

In the back, a flower garden brightens a patio – and can also be seen through the windows of the garden room off the dining room. Burnett said they opted for a patio rather than a raised deck.

“I like to be on the same level as the garden,” she said. 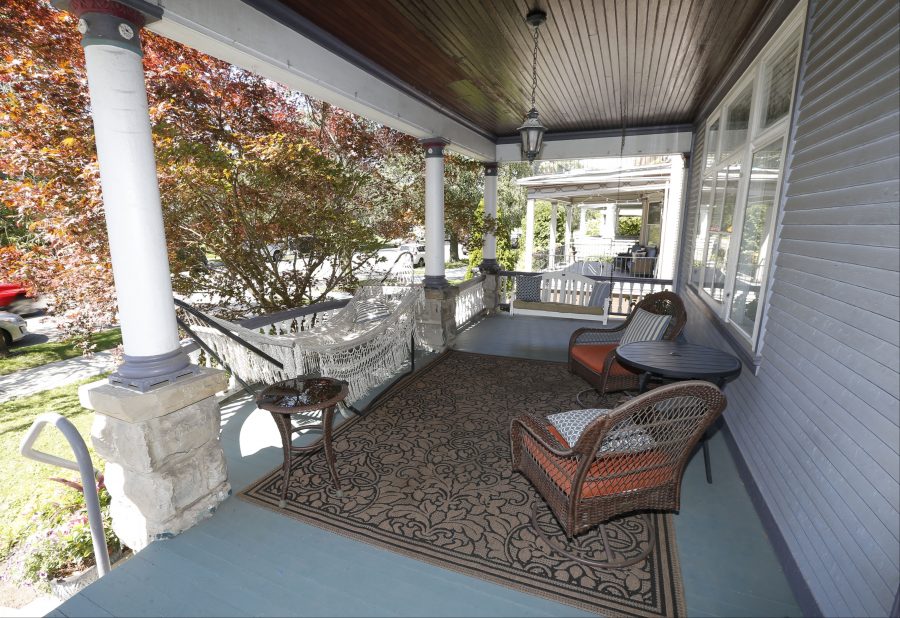 House at a glance

Layout: The open design features a living room in front, a dining room in back and a middle room with split staircase. A remodeled kitchen and small “garden room” with tin ceiling are off the dining room. The home has four bedrooms, two full and two half baths. The finished third floor was originally servants’ quarters transferred into an in-law apartment or guest room. There’s also a large covered front porch, back patio with umbrella table and grilling area and a garden with sunflowers, zinnias, phlox and other flowers pollinators love.

Furniture: Pieces that complement the style of the house came from both sides of the family. The three-piece dining room set with chairs belonged to Hickok’s grandparents, as did the piano. The chairs flanking the sideboard and several accent tables came from Burnett’s family. The couple also brought up two trunks they discovered in the basement.

Walls: A combination of paint and wallcoverings – including some by Bradbury & Bradbury, a California-based company that specializes in historic wallpaper design. Paint colors include Benjamin Moore’s Mount Saint Anne in the kitchen and Queen Anne Pink in the remodeled main bath. The front living room is painted a creamy yellow. The foyer is off-white.

Lighting: Some original, including the newel post fixtures on the staircase. The couple purchased other fixtures that fit the period of the home.

Accents: Paintings by Burnett’s mother and grandmother; antique birdcage; old family photos of Burnett’s relatives, including portraits and photos of her ancestors’ farms in Saratoga and Poughkeepsie, N.Y.; china from both sides of the family displayed on open pantry shelves in the kitchen; vases of flowers from the garden. 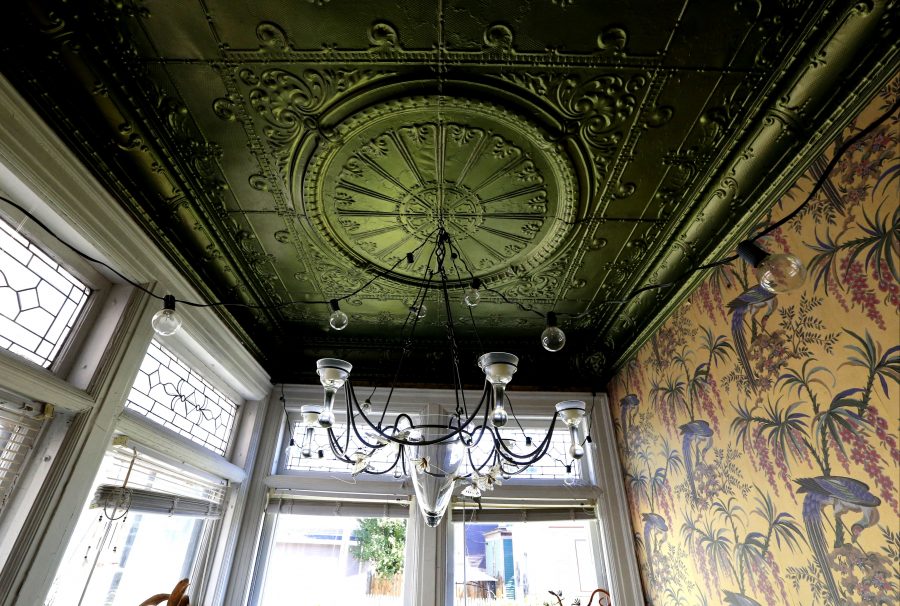 The ceiling in the garden room. (Robert Kirkham/Buffalo News)

Do you love your home? Tell us about it.

Today we feature the Buffalo home of Christine Burnett and David J. Hickok.

Our Home of the Month appears online – along with a gallery of photos by a News staff photographer – as well as in a print edition of Sunday Home & Style. (Today's story will appear in print Sept. 8.)

The residence also could be chosen as a Home of the Month.