CHICAGO — Before you think about this season, there's plenty of relevance in probing how the last one ended for Jack Eichel. And that's not a reference to the Buffalo Sabres' miserable finish or the firing of Phil Housley.

Eichel went to the World Championships in Slovakia, where he first met new coach Ralph Krueger to get started on building the player-coach relationship he hopes will finally last. And then he returned stateside to prepare for his summer training at home in Boston.

One night in June, Eichel made the quick trip downtown for some fun.

He had a game to go see — but not his beloved Red Sox in Fenway Park. This was everything. Game 7. Bruins-Blues at TD Garden. The night former teammate Ryan O'Reilly won the Conn Smythe Trophy and then got to hoist the Stanley Cup.

Eight years earlier, Eichel was a teenager on his couch screaming for his hometown Bruins during their Game 7 win in Vancouver. Now he was an established NHL player in the stands 10 rows from the ice, getting recognized — and getting chirped by the crowd — while dreaming about what it would be like on the other side of the glass. And how much it would mean to him and his adopted city to be in such a game.

"As soon as Buffalo drafted me, I wasn’t a Bruins fan anymore," Eichel said here Friday at the NHL Media Tour. "I wasn’t really a fan of either team. I had friends on the Bruins I would have loved see win a Stanley Cup" — including former Boston University teammate Matt Grzelcyk — "and I had a friend in Ryan that I was happy to see win the Stanley Cup.

"I wanted to go for the experience and it was a great experience. I knew I was going to see a friend of mine raise the Stanley Cup. It was 30 minutes from my parents' house. Easy to get to the game. A cool experience. You just want to be there. Seeing the celebration, the emotion of the guys makes you want it that much more. It was one of the cooler things I’ve ever seen."

Eichel saluted O'Reilly on his Instagram account after the game with a picture he took from the stands of his former teammate holding the Cup high (it said "Congrats, Fact Daddy" in a reference to O'Reilly's nickname "Factor"). Eichel was asked if he can draw parallels between St. Louis, a team that waited 52 years to win a Cup, and Buffalo, which is without one heading into its 50th anniversary. 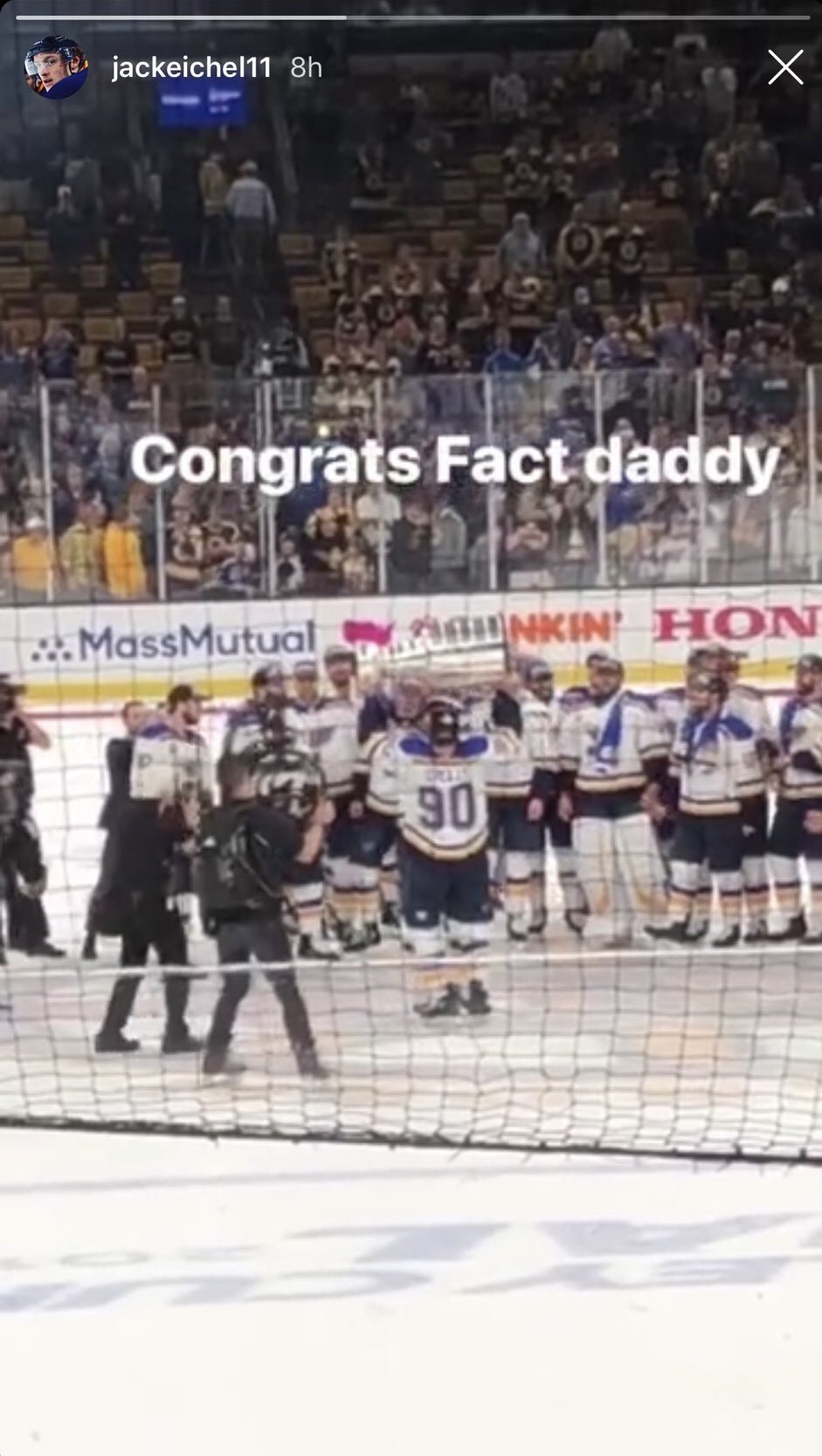 Jack Eichel's Instagram salute to Ryan O'Reilly from the TD Garden stands on the night of Game 7.

"Of course you think about it," he said. "You see the postgame celebrations, the fans, the crowd, everything like that and you just want it that much more. That’s the ultimate goal, why you play hockey, do everything you do is to try to do that.

"They’re at the bottom of the league at Christmas time and then they win the Stanley Cup. You’re never really out of it. It was a great experience to see. I was happy for Ryan. He’s a great guy, a good friend of mine, and I was really happy to see him win."

The Sabres, of course, have this minor issue when trying to win the Cup: They can't even make the playoffs. Eichel is 0 for 4 in his NHL career and spring 2011 — when Eichel was 14 years old — is the last time the Sabres were in it.

No NHL team has had a longer drought. Yes, there's that word again. It's going to be an overriding theme for the Sabres' upcoming season.

"The issue of the longest drought isn’t going to change our mindset at all, but of course you want to end it," Eichel told The Buffalo News after he left the media room. "You want to bring the playoffs back to Buffalo, do it for the fans because they’ve been so loyal to us through all the ups and downs the last few years. They’ve been one of the only constants. They deserve it as a fan base and a city, and you almost think as an organization we deserve it ourselves a little bit. I’m excited to start playing hockey again and get camp going Thursday."

Eichel should be excited. His numbers have improved all of his four seasons. He had career highs in every category last season and his 82 points made him a point-a-game player for the first time. His faceoff percentage went from 41.5 to 47.0. A career-low shooting percentage of 9.2 percent kept him from hitting 30, 35 or maybe even 40 goals. He keeps working at his shot and his shot selection to boost that number.

"You want to improve on everything from last year. The big thing for me is to score more goals, find the back of the net more," Eichel said. "That's something I want to do. That's one of the goals I had this summer along with other things. Every year you want to improve, be a better leader, be a better teammate. You want to help the team win more games. Whatever it is, I have to do it. If I score more goals, it will help our team."

Mike Harrington: Jack Eichel has to be better and he's not offended by the thought

Krueger knows Eichel is one of his major meal tickets. This is three coaches in five seasons for Eichel, and like anyone else who meets Krueger for the first time, he was blown away by the personality.

"He's somebody you want to be around, you want to be a better person around," Eichel said. "He's just such an impressive person. He can talk to you about anything. We've had some great conversations just getting to know him a little bit. It's been really good so far and I'm really excited. He's very calculated, very smart. He knows what he wants."

One thing Krueger undoubtedly wants is limited distractions during training camp. An unhappy Rasmus Ristolainen would be a big one. Camp is less than a week away and unless something changes in the next few days, Sabres GM Jason Botterill might have a very large disgruntled defenseman on their hands.

"I think everyone is expecting him to show up, right? He's under contract," Eichel said. "But I can't really comment on that much. I'm not Risto. I'm not Jason, doing Jason's job. If he's in the locker room at camp, part of the team, I think you go about business normally. You want him to be completely bought in and want to be there, but I guess we'll see what happens in the next week."

Eichel is stoked about the acquisition of close friend and workout partner Jimmy Vesey and by the re-signing of linemate Jeff Skinner to a $72-million deal. ("Anybody that scores that amount of goals, you need to keep around. It's good to see him get paid.")

And he's ready to give this regular season thing another shot. That 10-game winning streak is nearly a year ago now and Eichel wants more nights like those, and no more of the disaster his team endured in March.

"At times, you can get too wrapped up about what people are saying about you whether it’s positive or negative and how it's affecting you," Eichel said. "I think you just keep everything contained in the room. You want to make the playoffs every year as a competitor and it doesn’t matter if you haven’t made it in one year or have the longest drought. You want to play as long as you can. Everyone has the same goal at the start of every season and that’s to win the Stanley Cup. You’re just trying to do everything you can."