"West Side Story" sits high in the pantheon of musical theater, wearing its celebrated pedigree of Bernstein, Sondheim, Laurents and Robbins like a jeweled crown. When it deigns to return to earth and land on some intimate regional stage, there's always the risk that it will trip over the expectations woven into its long robes.

Or, the mere mortals taking on the classic behemoth can simply give it an obligatory bow before making it their own.

Bravo to MusicalFare for doing just that.

To start its 30th season, MusicalFare presents an energetic "West Side Story" that can spin you in a dance, slap you in the face and, ultimately, break your heart. Of course, Leonard Bernstein's music remains at the forefront. An off-stage band, led by Philip Farugia (who also has two small roles) and including Dave Siegfried, Jim Linsner, Jim Runfola and Ted Smeltz, deftly captures the mood of the composer's often ominous, sometimes uplifting score, with all its jazzy mid-century intensity. Their sound make us remember how original this music was when it debuted more than 60 years ago.

The score quickly takes on a character of its own while underlining the wordless posturing of the Jets and Sharks, whose traditional opening gang ballet becomes a more gymnastic version of modern dance across Lynne Koscielniak's innovative alley-like set.

Working mostly with actors who can dance a little, not dancers who have a few lines, director Chris Kelly and choreographer Nancy Hughes (with additional choreography by Bobby Cooke), use those talents as a strength rather than a liability.

From its inception, "West Side Story" has taken place in an alternate universe where, despite their violent underpinnings, neighborhood gangs never use profanity. It always sounded weird to me, and it still does here. On the other hand, the close proximity of the players to the audience gives a boost to the many throw-away comic lines that Arthur Laurents sprinkled throughout the book, and the cast seems to get a kick out of delivering them.

The best description of the large cast - 20 people - is consistent with a few stand-out performances. Local singer/songwriter Blaise Mercedes is dynamic as Anita, the girlfriend of Shark gang leader Bernardo (Alejandro Gabriel Gomez) and confidante of his sister, Maria (Dominique Kempf). 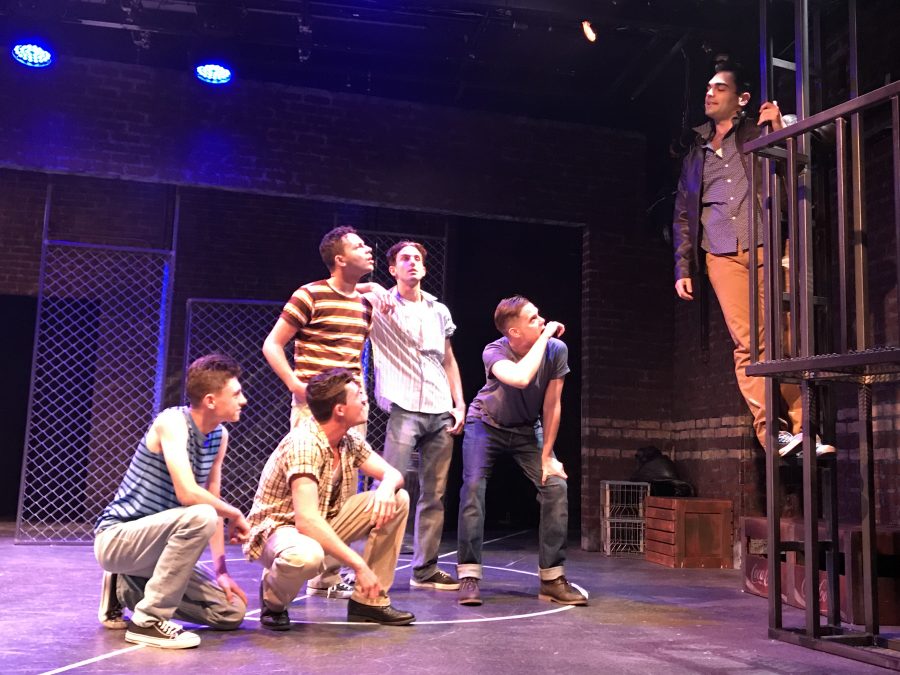 Kempf, seen last season in "Ragtime," also shines, giving Maria an appealing naiveté as the new arrival who doesn't realize there are rules about whom she can fall in love with. That means her true love, Tony, a former member of the Jets, is off limits.

And, as played by fair-haired, very talented but average looking Ricky Needham, he is problematic for other reasons.

Needham has a strong tenor voice and shows it off brilliantly singing "Maria." However, when we first meet Tony - painting a sign for his employer - this supposed street guy is wearing an Oxford shirt and spiffy clean dress pants. It's not a look you would expect from a fellow who only recently left a gang - a gang that he used to lead.

We may not need our Tonys to be tall, dark and dreamy, but they should have some swagger to them, and we don't see that in the aw-shucks, polite Tony we get here. In fact, most of the Jets and the Sharks are pretty clean-cut around the edges. "Grease" is not the word in this show, until the knives come out.

Though their onstage romantic chemistry may be more fizzle than sizzle, Needham and Kempf make up for it with beautifully paired voices in their balcony scene and "Tonight."

Victoria Perez and the Raices Theatre Company partnered with MusicalFare for the production. In addition to Gomez, who is splendid as Bernardo, the Sharks are Jordan Rosas, Joe Dan Torres and their "girls" - Lissette DeJesus, Julieanna Guash and Alexia Guzman.

Matthew DiVita is now the Jets' leader and Tony's best friend. He's joined in the Jets by Brendan Didio as the over-eager Action, plus Thomas Evans, Koby Morgan, Joe Russi and Dan Urtz. Their girls are played by Leah Berst, Karen Grace Harty and Rheanna Gallergo as the gang-member wannabe Anybodys.

As the tension builds between the gangs, so does the energy in the theater. The staging is spot-on when the Sharks and their girls perform their arguing ode to "America," and even though we all know how the story goes, their vitality makes you hope it might turn out differently this time.

That hope continues to infuse the ensemble's rendition of "Somewhere (There's a Place for Us)," voicing the dream none of them will ever realize. In the end, what remains is a vision of what might have been and the memory of what is lost when hate triumphs over love. As it does, too often.

Playing through Oct. 6 at MusicalFare (4380 Main St., Amherst, on the Daemen College campus). Running time is 2 hours 30 minutes with one intermission. Tickets are $47 (musicalfare.com).