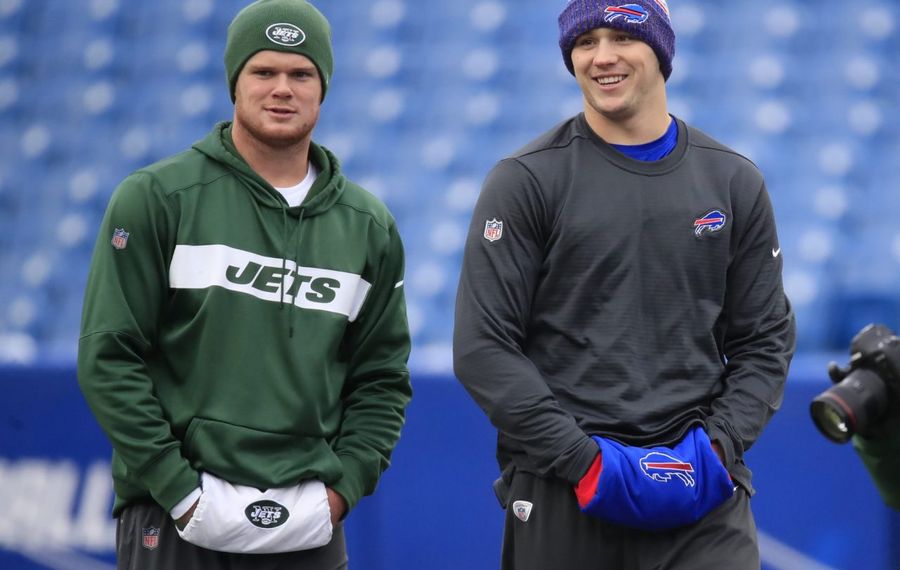 When the Bills run: So long, LeSean McCoy. The Bills opted to go with Frank Gore, Devin Singletary and T.J. Yeldon. Here’s a hunch: Gore is the starter, perhaps for the entire season, but Singletary ends up with the most carries. Sending a message to the rookie that just because McCoy was released doesn’t make the job yours just seems like a Sean McDermott thing to do. Singletary’s performance will be one of the most interesting to track Sunday. Is he ready for a feature-back role? The Jets allowed 126.3 yards per game on the ground last year, 26th in the NFL, but added third overall draft pick Quinnen Williams and free-agent linebacker C.J. Mosley to the front seven. EDGE: Bills.

When the Bills throw: Robert Foster toasted the Jets in both meetings last year, catching 10 passes for 209 yards. Foster, though, has been bumped down the depth chart by the additions of John Brown and Cole Beasley. Quarterback Josh Allen missed the first game against New York last year with his elbow injury. He threw for 206 yards and ran for 101 against the Jets in a December loss. Allen will be throwing behind an offensive line with four new starters. The Jets’ cornerback situation is one of the worst in the NFL. A headline in the New York Post last month read “Jets’ cornerback horrors just keep getting worse.” Allen has to take advantage of that. EDGE: Bills.

When the Jets run: While the Bills have finally decided to stop paying running backs, the Jets have gone in the opposite direction. It will have been 603 days between games for Le’Veon Bell after he sat out the 2018 season with the Steelers before signing with the Jets as a free agent. That didn’t stop New York from giving him a four-year contract that could be worth up to $52 million. Bell, who didn’t play in the preseason, has averaged 128.9 yards from scrimmage in his career, the league’s best since the 1970 merger. Like the Bills, the Jets’ starting offensive line barely worked together during the preseason because of injuries. EDGE: Jets.

When the Jets throw: Similar to how things are in Buffalo with Allen, New York’s hopes are tied to the development of second-year quarterback Sam Darnold. Close friends Allen and Darnold rented a house together this offseason in their native California. Darnold also got a new slot receiver in Jamison Crowder. New York’s top two receivers – Quincy Enunwa and Robby Anderson – are capable playmakers, but there’s not much depth behind them. The Buffalo secondary was the best in the NFL in passing yards allowed last season, at 179.2 per game. EDGE: Bills.

Special teams: The status of Bills returner Andre Roberts will be closely monitored leading up to the game. Roberts missed practice Wednesday with a quad injury. He’s had the games against the Jets, whom he played for last year, circled on his calendar since signing in Buffalo. Punter Corey Bojorquez is on a week-to-week tryout for the Bills after lacking consistency in the preseason. Kicker Stephen Hauschka drilled a 54-yard field goal in the preseason finale, which should give him some confidence after two misses earlier this summer. The Bills’ top two players in special-teams snaps played last year, linebacker Deon Lacey and cornerback Lafayette Pitts, are gone. The Jets changed kickers twice in three weeks, most recently claiming Kaare Vedvik off waivers from Minnesota and releasing Taylor Bertolet. Vedvik went just 1 of 4 on field goals in the preseason, so things aren’t going great there. EDGE: Bills.

Coaching: The Jets changed everything this offseason, from their uniforms to their general manager to their head coach, with Adam Gase coming over from Miami to replace Todd Bowles. Gase’s introductory news conference in New York, where his googly eyes became instant fodder for Internet memes, will live on forever. If he proves to be the right coach for Darnold, the prevailing opinion that he’s overseeing a circus might eventually die. That perception isn’t exactly helped,  though, when New York releases a player selected in the third round … of April’s draft. Bills coach Sean McDermott is working with several new assistants on his staff, including Ken Dorsey (quarterbacks), Bobby Johnson (offensive line), Chad Hall (wide receivers) and Heath Farwell (special teams). Edge: Bills.