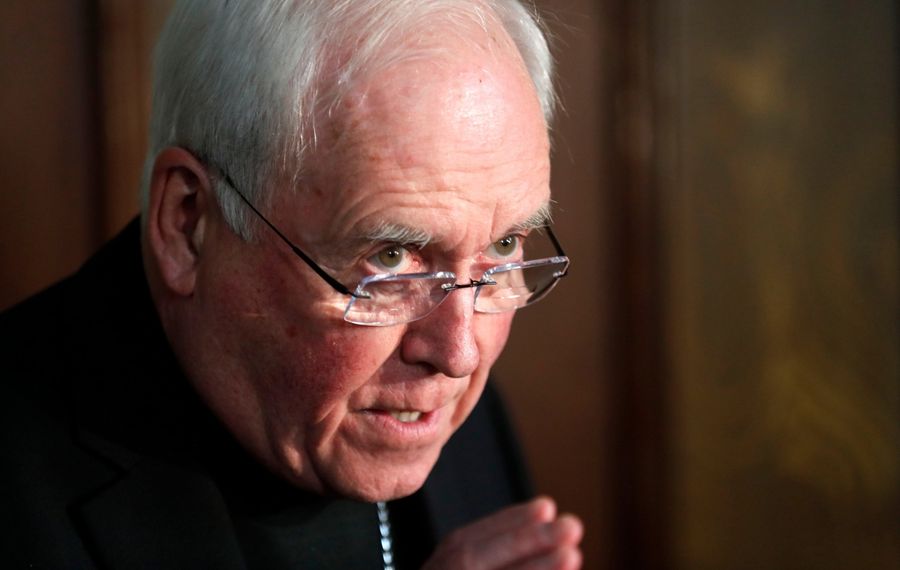 Bishop Richard J. Malone maintained Wednesday that he still had the support of the majority of Buffalo Diocese priests and parishioners and would not step down in the midst of another scandal — this one centered around his handling of a love letter from a priest to a seminarian and another priest’s alleged harassment of the same seminarian.

“I’m here because I feel an obligation as the one who was sent here to lead this diocese, to carry on, and once again, if I thought that the majority of Catholic people in particular were calling for my resignation, that would be a different story,” he said. “But I don’t feel that. I go out to parishes and schools all the time for visits. I am always well received when I go … I do feel enough support, honestly, to continue on.”

The diocese has been embroiled in a wider Catholic Church crisis involving allegations of clergy sexual abuse of children and adults, with several prominent Catholics calling on Malone to resign over his handling of the issue.

Passage of the Child Victims Act in New York, which allows victims a one-year look-back window to file lawsuits over abuse from decades ago, brought the scandal back into the headlines in August and renewed criticism of Malone.

The issue that led to Malone’s first news conference since last November centered on a love letter from the Rev. Ryszard Biernat to a seminarian, Matthew Bojanowski, and the Rev. Jeffrey Nowak’s alleged harassment of Bojanowski.

Malone can be heard in secretly recorded audio calling the crisis over a “love triangle” involving priests a “disaster” that could force him to resign.

The audio released late Tuesday by WKBW-TV showed Malone confiding in Biernat that “this could be the end for me as bishop,” if a story surfaced in the media about the three priests.

“It sounds like a soap opera. It sounds like a love triangle. And you know what the media can do with that,” Malone is heard in the recording saying to Biernat. “With all else that’s going on in the diocese and all the … attacks on my credibility … that I’ve known that something’s going on here that shouldn’t be and I let it go … I mean this is a disaster.”

Malone Wednesday rejected any notion of being forced to resign over the latest scandal, saying “I don’t feel it’s time for me to move on," during the 45-minute news conference in the rectory of St. Joseph's Cathedral.

It was the second time in two years that one of the bishop’s most trusted advisers leaked damaging information on Malone.

This time, Biernat recorded audio of what Malone assumed were private and confidential conversations. Biernat, the bishop’s secretary since 2013, secretly recorded Malone Aug. 2 at the bishop’s residence, WKBW-TV reported.

Bojanowski, who recently withdrew from Christ the King Seminary in Aurora, has accused the diocese of ignoring his complaints alleging inappropriate conduct by Nowak, including sexual harassment and violating the seal of confession after Bojanowski received the Catholic sacrament with Nowak as his confessor.

Nowak also found in Bojanowski’s Boston apartment a handwritten letter dated July 13, 2016, from Biernat, in which the bishop's secretary professes his love for the seminarian. Nowak photographed the letter without Bojanowski’s permission.

Malone calls Nowak a “sick puppy,” a “perpetrator” and “dangerous” at various times in the audio recordings, which date back to March.

Malone backed away from those descriptions on Wednesday — saying he used those terms casually and out of frustration with Nowak and would have spoken more carefully in a formal situation.

Critics said the audio recordings show that the bishop failed to remove Nowak promptly as pastor of Our Lady Help of Christians in Cheektowaga, despite knowing the priest potentially could harm other people.

But Malone defended his handling of what he called “a very complex, convoluted matter” that started in January when Bojanowski sent a letter to the bishop with his complaints about Nowak.

Malone said Nowak was never accused of engaging in sexual contact with an adult or child, and the diocese was not aware of any behavior on his part that threatened harm to the public. The bishop said he put Nowak on leave after the priest refused to go for a behavioral assessment at St. Luke Institute.

Malone said that Nowak and Bojanowski had been friends and that Nowak served as a mentor for Bojanowski as he discerned a vocation to the priesthood. Then, Bojanowski met Biernat and began spending more time with him.

“Matthew’s relationship with Father Nowak cooled you might say, and this was disturbing to Father Nowak,” said Malone. “Father Nowak secretly photographed that letter he found in Matthew’s apartment in Boston, when he was visiting there. This is all several years ago.”

Biernat on Aug. 14 took a personal leave of absence as secretary and vice chancellor, at the bishop’s request.

“The content of that letter, if you’ve seen it, is a bit concerning and that is why I suggested that Father Ryszard should go on a personal leave of absence for a while,” said Malone.

The letter suggests that Biernat and Bojanowski were involved in a romantic relationship, but Malone said he was “not aware at this time of any allegations of sexual impropriety between Father Ryszard and Matthew. None of that has come my way.”

Malone said Biernat explained the contents of the letter to him.

“I think you would have to ask him for that. It’s his story, and I don’t feel comfortable revealing what he told me about that,” said Malone.

Attorney Barry N. Covert, who represents Biernat and Bojanowski, said the bishop was trying to distract people from the real issue of not removing Nowak in a timely fashion.

Biernat’s tape recordings show that the bishop and other chancery officials knew in March that Nowak had engaged in harassment and other inappropriate behavior, Covert said.

“There’s no excuse for waiting until August to put him on leave. That’s the issue here. That’s why my client, Father Biernat, felt compelled to tape Bishop Malone,” he said.

Malone said he was stunned and disappointed that Biernat recorded private conversations and gave them to media. Biernat has lived in the same home as Malone since 2013 and is nearly constantly by his side at church functions.

“I felt like I was hit by a bolt of lightning, emotionally, by it. It was the last thing in the world I ever expected or anticipated in my relationship with Father Ryszard. That’s all I can say. I was just stunned and dismayed by it. I just never saw it coming,” he said.

Malone called the recordings a “serious breach of confidentiality” and said that Biernat had violated the church’s canon law.