While it's been a shaky start for the local NCAA Division I men's soccer programs, there's been plenty of exciting and unexpected results on the women's side. How many people thought St. Bonaventure had the slightest of chances of toppling the University at Buffalo?

Over in the lower tiers, one NCAA Division 3 men's team - predicted shockingly low in their conference - has dreams of grandeur, while Medaille and D'Youville men's soccer appear headed in opposite directions. It's an exciting time.

We debut our players of the week post, which recognizes the standout performances among Buffalo college players. Will it be perfect? Probably not, but we'll do our best to home in on the biggest difference-makers.

It was an awful first week for the three local D-1 men's teams, which is ominous for the remainder of the campaign. Canisius, Niagara and St. Bonaventure combined for an 0-4 record, with two goals for and 15 against.

Grand Island product Troy Brady, a senior captain for the Griffs, notched one of those two, ripping a penalty kick past Bucknell's keeper to give Canisius some life.

Honorable mention:
• Cuneyt Vardar, St. Bonaventure: Spent the summer with the NPSL playoff-qualifying Rochester Lancers and tallied Bona's only goal in the 5-1 drubbing against Florida Atlantic.

[Related: Find a local college home game to watch with our Google Calendar]

The Bonnies had beaten UB only once in the seven match-ups since 2012, and if you looked at the peripheral stats instead of the final score, you'd think the Bulls won handily again. They did not.

Goalkeeper Malcolm registered six saves - including two difficult stops in the second half - in keeping the clean sheet, arguably the most memorable of her illustrious career. Center back Maddie Mason, the most unlikely of goal scorers, nodded home the winner in the second half from freshman Kenzie Tarmino's service.

Both Mason and Tarmino were also instrumental in the defensive effort to hold UB at bay despite the visitors' near-constant pressure. It was only fitting they combine for the game's lone goal.

Honorable mention:
• Luca Fahmer, Canisius: The Youngstown State transfer - who we predicted would be immensely valuable for Todd Clark's team - scored the game winner in Canisius' only win through three games, a home win over Hampton.

This category was the toughest to pick, but it's hard to overlook the Norwegian striker's fiery start to the season. After a back-heel assist to Saleman Salim on the ever-important second goal in a 3-0 win over Medaille, Pencic potted a hat-trick in the Bengals' pounding of RIT on the road.

Many players will take a step back as a sophomore after an exceptional freshman year. Armed already with SUNYAC rookie of the year and all-league first team awards, the clinical striker seems poised to avoid a letdown.

Honorable mention:
• Mwibeleca Tumba, D'Youville: The man known simply as "Tumba" has been a dynamo for the 2-0 D'Youville Spartans. After starring last season for John Grabowski's Erie Community College side, Tumba has become an asset for Grabowski's former head coach, Brendan Murphy.

The Congolese native has scored three of his team's six goals - although one probably should have been recorded as an own goal - and he's been a nice complement to the feisty Hunter Sherman.

• Jackson Retzer, Fredonia: What can't Retzer do? The Williamsville North product has transitioned from defense to midfield and excelled in his new role, scoring all three of the Blue Devils' goals in the team's 1-0-1 start.

Retzer's header off Matt Cullen's service beat Baruch, but his two goals - to dig Fredonia out of a 2-0 hole against Hunter - were even more impressive, punctuated by a second-half free kick. 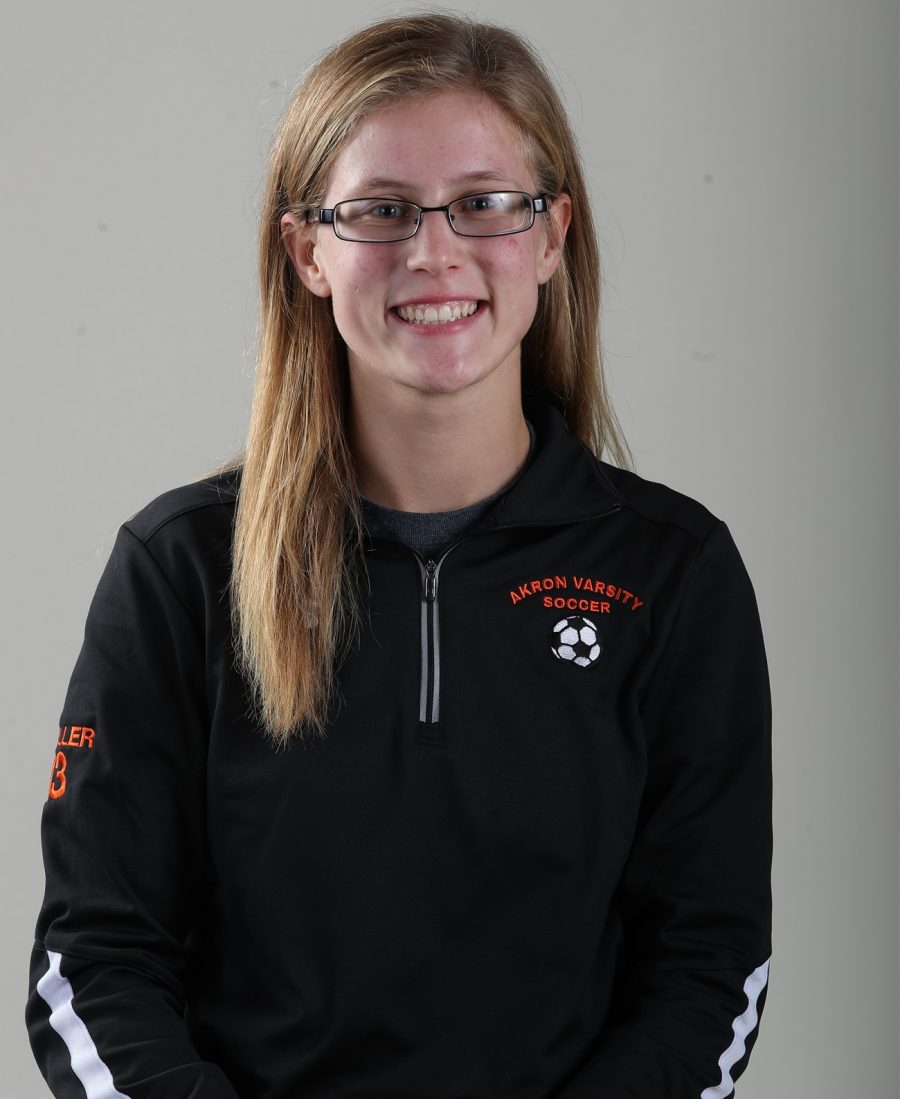 Laurie Poeller, pictured as a scholar athlete while at Akron High School, was stellar for D'Youville in net. (James P. McCoy/News file photo)

What a week for women's keepers, as Malcolm seized the honors for Bona and Laurie Poeller snagged the hardware outright for D2/D3 with 12 saves in a shocking shutout of Alfred University to win the Spartan Classic.

Poeller, who played as a reserve forward under coach Jim Hesch last season, is the successor to just-graduated Megan Dulniak, arguably the best keeper in program history.

Given the game-flow, you could argue that the Spartans had no business being in the game against Alfred, but Poeller's consistent shot-stopping kept it scoreless to set up Jordan Pachla's heroics - a snipe from outside the 18.

After scoring 25 goals and providing 29 assists as a freshman last year for Gary Boughton, Schelble is well on her way to furthering her resume under new coach Kolby Banker for a potential transfer to a bigger program.

• Medaille, Hilbert, Buffalo State and Fredonia are all win-less on the season so far, while Daemen has yet to kick off its campaign.