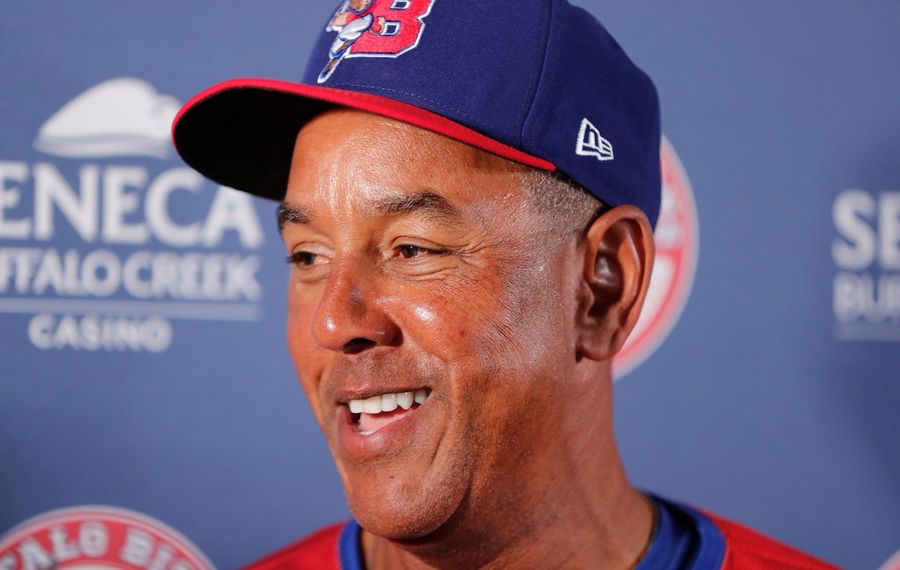 After three seasons at the head of the Herd, Bobby Meacham will not be back in 2020 as manager of the Buffalo Bisons.

Meacham and the parent Toronto Blue Jays have agreed to split as part of the first wave of changes among the Blue Jays' minor-league staff. Meacham's departure was initially reported early Wednesday evening by Shi Davidi of Sportsnet and the Blue Jays have yet to formally announce the moves.

While using a franchise-record 77 players this season, Meacham kept the Bisons in the International League North division race through game No. 136 of their 140-game schedule before being eliminated. Buffalo was 71-69, its first winning record since 2014.

The Bisons were 4 1/2 games out in the IL North and finished in third place, but 38 players who spent time in Buffalo saw at least one game in Toronto.

"The number of players seems to increase every year and it's not just the player moves you make," said Mike Buczkowski, president of Rich Baseball Operations and Bisons general manager. "It's the what-ifs, the maybes, the other 75 moves that don't happen that he's trying to come up with Plan Bs for. I think 'Meach' did a great job holding the team together and they made it exciting right to the end."

Meacham, 59, was the Bisons' 20th manager in their modern era dating to 1985 and joined Torey Lovullo and Joel Skinner as the only men to play for and manage the team in that span. Meacham appeared in 94 games for the Herd in 1989, the year before he retired as a player.

Meacham was 197-222 in three seasons in Buffalo. Double-A New Hampshire manager Mike Mordecai is also leaving the Toronto organization to take a high school job in Alabama, so there does not appear to be a quick, obvious replacement. New Hampshire pitching coach Vince Horsman has also been let go.

Meacham has been a coach in both the minor and major leagues for 29 years, serving 12 years as a manager and posting a record of 762-848. His last stint in the big leagues came as first-base coach for the Houston Astros from 2010-2012. He joined the Blue Jays' chain the next year as manager at Class A Dunedin (Fla.).

Meacham was bypassed by the Blue Jays for a coaching job after last season when new manager Charlie Montoyo hired his staff and instead promoted New Hampshire manager John Schneider to Toronto over the Triple-A skipper. While Meacham deflected questions about that move during the year, multiple sources said he felt the decision indicated he didn't have much of a chance of getting a job in Toronto when one became open.

Meacham, a former No. 1 draft pick of the St. Louis Cardinals, was the everyday shortstop for the New York Yankees in 1985 under Billy Martin and played 457 games for the Yankees from 1983-1988. He spent '89 in Buffalo as part of the Pittsburgh chain playing under Terry Collins and retired after spending the 1990 season at Triple-A Omaha of the Kansas City chain.

"He cared about players. He went through a lot of what they went through, big prospect, No. 1 pick," Buczkowski said. "He related a lot of what he did later in his career when he was trying to find and keep a job. He was able to sympathize and offer good advice for players."

There is no word about the status of the Bisons' coaching staff, all of whom earned plaudits throughout the season in the Buffalo clubhouse. Former Gold Glove outfielder Devon White just completed his third year as a position and first-base coach, while hitting coach Corey Hart has been here two years and pitching coach Doug Mathis was in his first season after coming to Toronto from the Seattle organization.