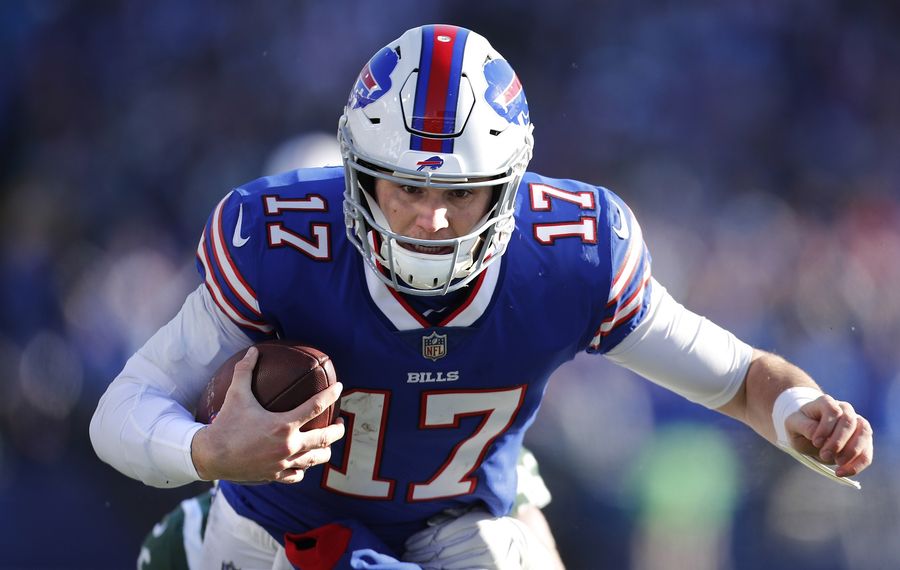 If you couldn’t tell by looking at this special section, the Buffalo Bills’ success or failure in 2019 will rest largely on the performance of second-year quarterback Josh Allen.

If his game rises to another level, so too should the Bills’ spot in the standings. If Allen regresses, though, serious questions could emerge about the future direction of the team.

1. Cole Beasley becomes Dale to Allen’s Brennan. That’s a movie reference for those who are lost, from Allen’s favorite Will Ferrell flick – "Step Brothers." Dale and Brennan became best friends, and that’s what needs to happen with Beasley and Allen. Beasley gives something the Bills have long lacked – a true slot receiver who can work the short and intermediate routes and move the chains on third down. The chemistry between Allen and Beasley was apparent during the second preseason game against Carolina, when the receiver caught all five of his targets for 44 yards. “All I’m trying to do is just do my part, get separation, get some easy throws for him and just help out the team as much as I can,” Beasley said after that game. Those easy throws will go a long way toward helping Allen’s completion percentage improve from 52.8 percent.

2. Rebuilt offensive line gives him adequate time. The Bills have four new starters up front, with left tackle Dion Dawkins the lone holdover from 2018. The projected rest of the line includes left guard Quinton Spain, center Mitch Morse, right guard Jon Feliciano and right tackle Cody Ford. That assumes the Bills keep Ford, their second-round draft pick, at tackle. Another option would be to bump Ford inside and start Ty Nsekhe at tackle. Either way, far too often last year, Allen was forced to run for his life. That led to some exciting plays and the second-best rushing total among quarterbacks, but it’s not something offensive coordinator Brian Daboll wants to make into a habit. If given proper protection, the Bills want Allen making plays with his arm first, then his legs.

3. When things do break down, Allen picks his spots correctly. Allen has to find a healthy balance when it comes to rushing. He showed as a rookie that it’s a weapon for the offense. Who can forget him twisting Kiko Alonso into knots in Miami or the leap over Anthony Barr in Minnesota? Allen’s ability as a runner was the single biggest surprise of 2018. It should not be coached out of him entirely, and Daboll can’t be afraid to use it. “It’s something we’ll never take away from him,” Daboll said in an interview with The Buffalo News in June. “He has to be smart with it – understand when to say when, but we have a lot of confidence in him.” There was a noticeable improvement toward the end of 2018 in Allen knowing when to duck out of bounds to avoid unnecessary shots. “The mindset I have to have is limit the hits as much as possible,” he said. “Survive for another down.”

4. Aided by Daboll, the mental side catches up to the physical tools. Everyone knows Allen can throw a football over them mountains. But can he go through his progressions and make the proper read, then execute the throw? Can he identify coverages? Is he fully aware of the situation? Can he get the offense out of bad plays and into good ones? Those skills have nothing to do with arm strength. Allen progressed in that regard last year, aided by the addition of veteran quarterbacks Matt Barkley and Derek Anderson. Barkley is back this year, and is a valued resource as Allen’s backup. With another year of working together, Daboll knows the areas in which Allen excels – and areas in which he struggles. Daboll has said Allen is taking more ownership of the offense, but it’s on the coordinator to put Allen in advantageous situations.

1. He gets hurt. Allen’s elbow injury as a rookie cost him four games, but was viewed as a blessing in disguise because he got the chance to learn behind Anderson and Barkley. That’s not going to be the case this year. Any missed time will be detrimental to Allen's development. Statistically, that’s slightly more likely to happen than not. Last season, 15 quarterbacks started all 16 games for their respective teams, so less than half the league. The year before, it was only 12. At 6-foot-5 and 237 pounds, Allen is big enough to take some hits, but he’s at more of a risk of injury based on how much he runs. The worst-case scenario for the franchise is a serious injury. If nothing else, the Bills should at least have a good idea what they have in Allen after this year. That won’t happen, though, if he misses an extended amount of time.

2. He can’t shake playing “hero ball.” Easily the worst throw of the preseason came against the Detroit Lions, when Allen scrambled to his right and threw across his body to the middle of the field. The ball was intended for Robert Foster (in a manner of speaking), but had no prayer. Three Lions were waiting to make an easy interception. The play ended up being overturned on a penalty, but it was exactly the type of throw the Bills are trying to get Allen to abandon. After the game, Allen said the right things. “I know I can’t do that, but I’m glad it happened in the preseason. It’s a little reminder of what I can and can’t do. I understand that we weren’t throwing the ball, and I wanted to take a shot.” That type of thinking got Allen into trouble in college at Wyoming and at times during his rookie season. In short, he has to eliminate that from his game.

3. Offensive line doesn’t come together quickly enough. A concussion to high-priced center Mitch Morse suffered early in training camp caused him to miss the entire preseason. Morse is cleared and expected to be ready for the season opener, but that’s weeks of practice time he missed working with Allen and the team’s rebuilt offensive line. At almost every position along the line, there is a question. Can Dawkins bounce back from a poor second season? Why were Titans fans so eager to see Spain go as a free agent? Can Morse stay healthy? Is Ford a guard or tackle? If the answer to even some of those questions is negative, it will be problematic for Allen.

4. New “weapons” aren’t as potent as advertised. Allen will be working with three new wide receivers (Beasley, John Brown, Andre Roberts), three new running backs (Devin Singletary, T.J. Yeldon, Frank Gore) and four new tight ends (Tyler Kroft, Dawson Knox, Lee Smith, Tommy Sweeney). There are a whole lot of unknowns in there. Will a true No. 1 receiver emerge? How are the carries split without LeSean McCoy? Is Kroft – or someone else – an upgrade from Charles Clay at tight end? Again, if the answer to some of those questions is a negative, that also will be problematic for Allen.

Josh Allen's preseason is over. Let's hope trying to do too much is, too.

TALK FOOTBALL WITH THE NEWS

Listen to our expert panel of Buffalo News Sports reporters Vic Carucci, Jay Skurski and sports contributor Jim Kubiak discuss how the local pro football team is preparing for the first season game and the season. You'll have a chance to ask questions, plus be entered into a drawing.

Light refreshments will be served.

If you have any questions, please reach out to our Customer Satisfaction team at 716-842-1111 or email subscriberservices@buffnews.com