One proposal would demolish the Skyway and turn Ohio Street into a "grand boulevard" with water-related amenities and green spaces.

Another would keep cars on the elevated highway, add a bridge to the Outer Harbor at Michigan Avenue and eliminate underused ramps to encourage new development.

Still, another proposal reimagines the Skyway as a glass-enclosed structure full of beaches, tropical plants and cafes.

It would offer "a strong boost to tourism from nearby Toronto, and will give the 'snowbirds,' who traditionally fly south for the winter, a slice of Miami Beach in Buffalo as a convenient alternative destination," the proposal says.

These are among the creative and comprehensively drawn proposals that have made it to the next round in the fast-tracked Skyway competition. They're now on display in the downtown Central Library until Sept. 13, with the public invited to send written questions about them to the panel either onsite or online at esd.ny.gov\skywayideas. A selection panel picked the 16 concepts from over 100 proposals.

"We have a really robust series of responses that run the gamut between full removal, partial removal and creative reuse," said Howard Zemsky, chairman of the "Aim for the Sky" selection jury.

The contestants, whose identities are being kept secret for now, come from Buffalo, elsewhere in New York State, other parts of the country and foreign nations. Multidisciplinary teams are also entered.

"A lot of good thinking has gone into this process," Zemsky said. "From our standpoint, they have exceeded our expectation in terms of the depth and breadth and planning and thought that has gone into it to date." 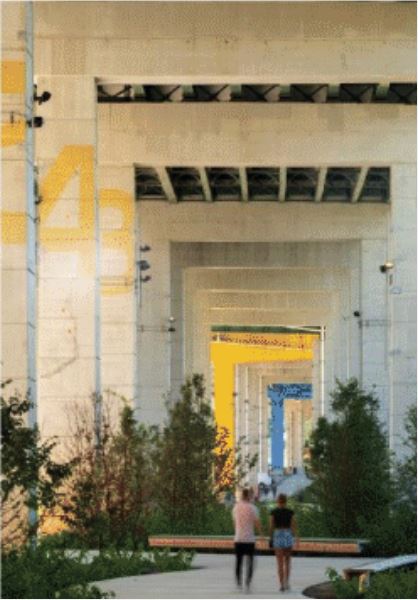 More than 42,300 vehicles on average cross the Skyway daily, according to the state Department of Transportation.

Contestants were asked to reimagine the full 4-mile Skyway corridor along Route 5, including the 1-mile of elevated highway, which covers 75 acres owned by the state Department of Transportation from the Buffalo River to Ridge Road in Lackawanna.

"This is intentionally a corridor competition," said Zemsky, who is also chairman of Empire State Development. "It's not just take it down or not, but let's reimagine the whole corridor. The most important question is: What's best for Western New York for the next 65 to 70 years? That's what's on the governor's mind."

The competition, which began May 13, will conclude with the naming of the top three submissions later this month.

Zemsky said the winning selection will set the vision for how to move forward, even if all of the details are not necessarily followed. A hybrid of ideas could also emerge, he said.

"You would expect the first-place winner would have the consensus of the panelists," Zemsky said. "You wouldn't imagine the winner of a competition like this would end up being diametrically opposed to what we ultimately recommend doing."

The first step in moving forward with a preferred plan will be the environmental impact statement process. Zemsky said he hopes that can begin "relatively shortly" after the competition is completed.

"This isn't about an exercise that is just for the sake of having a competition," he said. "It's ultimately to develop and implement a plan."

Buffalo resident Amyn Jones, who was at the library when the proposals were displayed, said he wants the Skyway to remain.

"It's definitely an adventure when you go up there – it's a problem in the wintertime because it gets icy up there – but any other time you can see everything, including the whole downtown, and it's a quick way to get where you need to go to," Jones said.

The selection panel originally intended to announce the top 20 submissions on July 15, but it ultimately needed more time to make its choices, choosing 16 instead. The competition awards $100,000 to the first-place winner, and $50,000 and $25,000, respectively, to the second- and third-place winners.

There isn't a price tag yet on what it would take to tear down the Skyway, if that should be the decision.

Rep. Brian Higgins said the contest and its implications for Buffalo are "transformative."

He's a member of the House Ways and Means Committee, and he said he's committed to find federal funding.

Higgins has made no secret of his desire to see the Skyway come down.

"For the first time ever, Buffalo now has choices to make," Higgins said. "We've never had other things to consider. Really, we were stuck rehabilitating over and over and over again a structure that was unsafe, would not be approved for construction today because it is functionally obsolete and that is fracture critical."

The competition, like the 5-year-old 43North competition for startup entrepreneurs, puts a spotlight on the many changes taking place in Buffalo, Zemsky said.

"It's consistent with and builds on all the waterfront activation, and all the good planning, and everything that has gone on with the inner and outer harbors in the past decade," Zemsky said.

The woman who named the Skyway 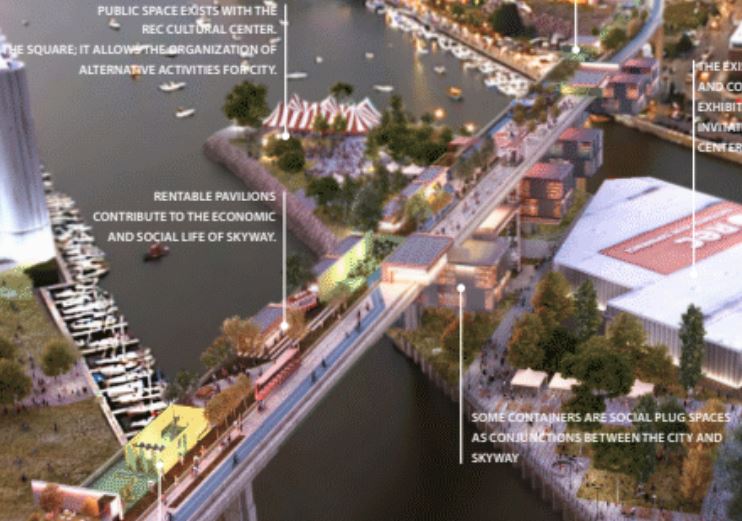