The Adirondacks are a favorite destination for Dean and Jody Wienke. In between trips, they enjoy a bit of the Adirondacks in the backyard of their City of Tonawanda home.

Their 10-by-14 screened-in gazebo, designed and built by Dean, features Adirondacks-themed decor, much of it vintage.

Old signs, wooden skis, snowshoes, paddles, fishing gear and Dean’s maternal grandfather’s backpack from his days as a troop leader complement the wicker furniture and an old dining table they bought at an estate sale.

The gazebo has not always looked the way it does today. It has evolved through the years.

“It started with just four posts and a piece of shade cloth over the top,” said Dean, who built the structure about 18 years ago. They were renovating the interior of the house they had bought in 1991 and wanted to create a shaded area to cool off during breaks.

Eventually, they decided to make it a more permanent structure so they put a roof on it. Then, because their two kids were no fans of insects when they were young, Dean made the side panels and doors and screened it in.

The idea for the wooden grid design on the screens and the decorative curved pieces below the roof came after Dean saw them on a similar gazebo featured in Family Handyman magazine.

He removes the curved pieces before covering the screens with plastic for the winter, Dean noted. 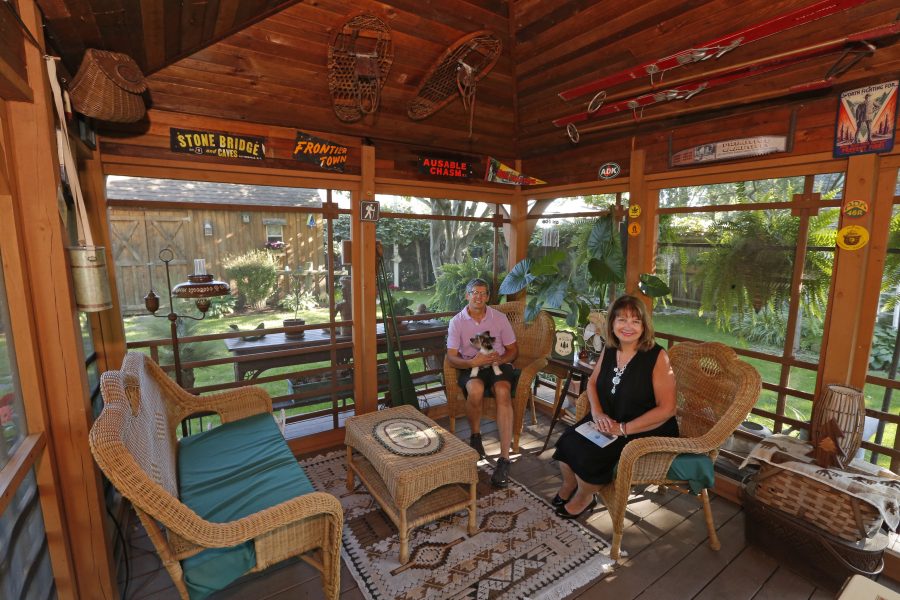 Dean and Jody Wienke relax with their Yorkie, Vinnie, in the gazebo. (Robert Kirkham/Buffalo News)

He still wasn’t done. Dean did not like the look of the plywood panels on the ceiling.

“It drove me crazy. I wanted to paint it; I wanted to do something. For years I looked at it and said, ‘Why didn’t I put planks on there instead of plywood?’ ” said Dean, who works for a pharmaceutical company.

A solution appeared years later, when friends in North Buffalo were redoing their 100-year-old garage.

“They had all this tongue and groove wood that they were going to get rid of. They said, ‘Hey want some of this?’  " Dean recalled.

"Well, I wasn’t going to pass up tongue and groove wood; I knew I would do something with it. It sat in the shed for about a year. Then Jody said, ‘Why don’t you put that on the ceiling?’ ” Dean said.

So that’s what they did.

The Wienkes are no strangers to salvage and secondhand style – inside and outside of their home.

They have been doing it since the early 1980s – even before the influx of HGTV shows, DIY websites and books on the subject.

“The style of the house and yard is very eclectic with items from flea markets, garage sales, antiques stores and a heavy dose of ‘GPs’ (garbage picks),” said Jody back in June 2018, when their residence was featured as a Buffalo News’ Home of the Week.

This is especially true in the backyard, where everything from old shutters and windows to headboards and a porch column are re-purposed as garden decor.

Fortunately, they have similar tastes.

“We like the same stuff. We have the same ‘Let’s save it from the dumpster or the landfill’ attitude,” said Jody, who works in the City of Tonawanda clerk’s office. 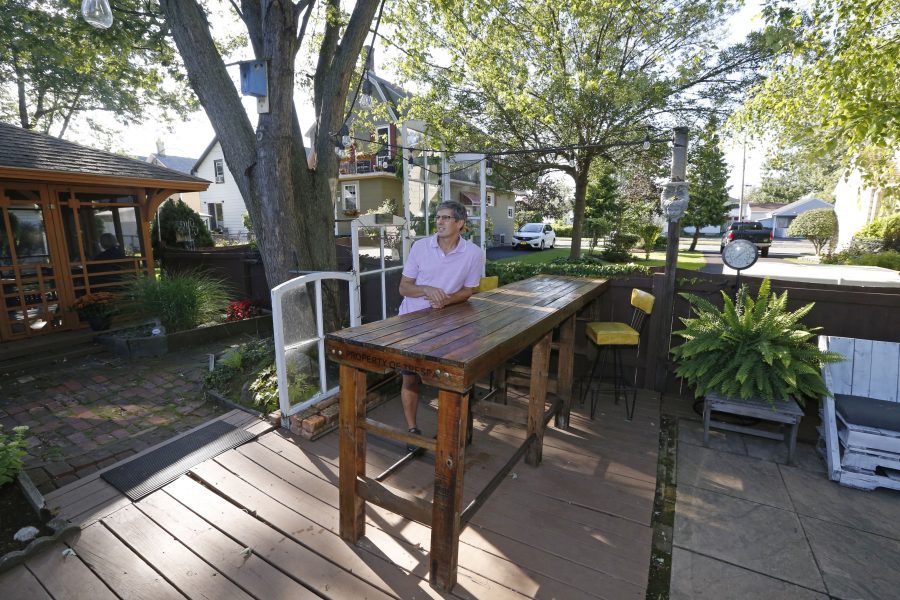 Dean Wienke at the 10-foot-long table he built from scrap pallet wood for the fire pit area, another gathering spot.   (Robert Kirkham/Buffalo News)

Some other backyard projects:

• The sitting area around the fire pit is furnished with benches that Dean built from scrap pallet wood. He also used pallets to build the 10-foot-long, bar-height table – complete with foot rest rail. This gathering spot is illuminated at night.

• The table outside the gazebo is another salvaged piece. A lodge in the Finger Lakes they were visiting had discarded items from old cabins during a renovation. The Wienkes brought home the wicker base and an old door that Dean cut down to create the tabletop.

• Old windows show up in the garden. Dean used some to build a small garden house and others to create a corner piece that separates the fire pit area from the rest of the yard.

• He also made the arbor using logs he brought home from a friend’s property in East Otto. This area also is illuminated at night.

Like many of the couple’s finds, the old table has a special story. They found it at an estate sale while they were bicycling around the small town of Wellsboro, Pa.

At first, its owner seemed hesitant to part with it, they recalled.

“We sat around that table a long time with her until she was comfortable to let it go,” Jody said. “I think she had to be comfortable with wherever that table was going. I’m still friends with her on Facebook. I send her a picture of it every year, just so she knows it is still well-loved.”

* Take a look at another recent "Favorite Spaces" feature: