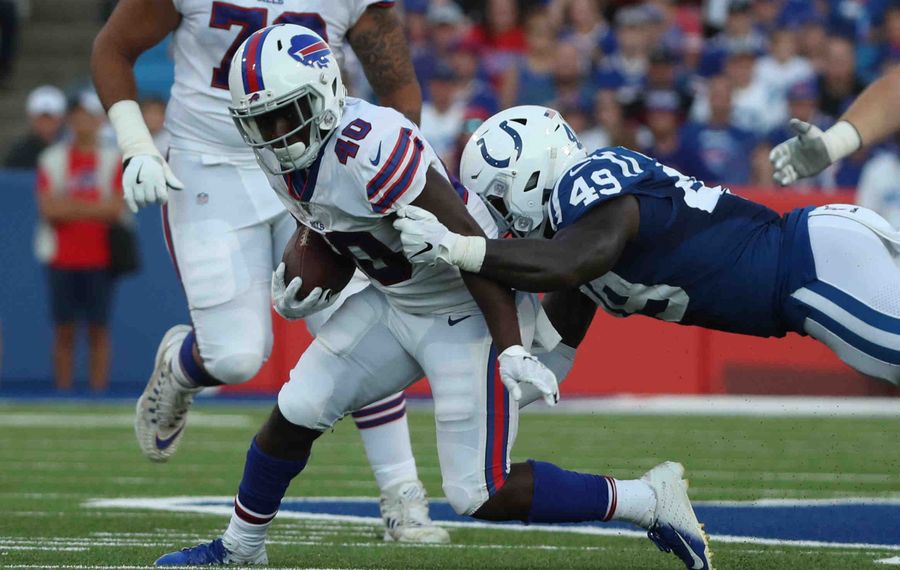 From the minute he drafted him, Brandon Beane has positively glowed about Devin Singletary.

The Buffalo Bills’ general manager called the rookie running back from Florida Atlantic the most fun player he scouted during the 2018 college football season. He raved about Singletary’s vision and instincts, calling those “rare” traits.

Even so, it wasn’t known just how quickly Singletary would carve out a role with the Buffalo Bills. He was joining a backfield that featured two potential Hall of Famers in LeSean McCoy and Frank Gore, along with a former second-round draft pick in T.J. Yeldon.

Singletary’s path to playing time became a lot clearer Saturday, though, when the Bills released McCoy. The rookie’s performance in training camp and the preseason factored heavily into that decision.

“We felt he's shown enough in practice and in games,” Beane said Saturday. “Some of it is physical. Some of it's mental, too. We have some guys that are young players or new players learning our system on either side of the ball. We just felt right now that we could get contributions from Devin.”

How the team decides to do that will be up to offensive coordinator Brian Daboll and running backs coach Kelly Skipper, but the release of McCoy proved that the Bills feel like Singletary is ready to contribute in some form or fashion.

“You’ve got to get him in here and see how well he picks up his role,” Beane said. “He’s being asked to do some different things. They didn't throw him the ball a lot at Florida Atlantic. He had to prove himself as much as you can. Now we haven't played live games yet. That's a different test. It's a different speed coming up. We've tried to alert all our rookies that the preseason has its own speed, and it'll pick up as we go into Week 1 at the Jets. So, again, Devin's an unproven player in a regular-season game, but we've felt he has done enough and answered enough questions for us to make this decision happen.”

At Florida Atlanta, he made just six catches as a junior in 2018. The Bills conducted a private workout with Singletary leading up to the draft and asked him to run some routes, but only so much can be learned when there isn’t anyone trying to hit you. But the instinct and vision Beane saw during the scouting process were evident in the preseason.

“Just seeing his natural feel,” Beane said of what checked the receiving box this preseason for the team. “You can send guys out for a pass and they can run out there, but there's a feel in zones, where to find the holes. There's a feel out there of just natural hands, catching the ball.”

At just 5-foot-7, the other question was about how Singletary would hold up in pass protection. If a running back is in the game on third down who can’t pass block, opposing defenses will send blitz after blitz.

“I'm not going to say he's perfect at either, but he's shown the ability to do it,” Beane said. “He understands protections. The first thing to do in pass pro is to understand protections and where things are coming, where the free man is coming that he's got to pick up. He seems to have a good grasp of that mentally. The next part of that is his technique. I thought early in camp, he was inconsistent with his technique. I think he's improved it, and I think he'll continue to work on it. He's shown enough to be in there on, I would say, any of the three downs.”

It remains to be seen which of those three downs Singletary will be used on. The Bills ended up keeping three running backs on their 53-man roster, with Marcus Murphy and Christian Wade also being cut Saturday. Senorise Perry was placed on injured reserve with a quadriceps injury, although he is expected to be waived with an injury settlement. That leaves Singletary, Gore and Yeldon.

Speaking about the release of McCoy, Beane said the Bills did foresee using a running back-by-committee approach. The team weighed how that would sit with a player like McCoy, who throughout his career has been a lead back.

“It definitely went into the thought, but there was a lot of things that went into it,” Beane said.

High up on that list was the emergence of Singletary.

“I don't want to put him on a pedestal, but I think he's done a very good job,” Beane said. “He's answered the questions that we've had so far. Again, a guy that hasn't played a regular-season game, I don't want to put him in Canton yet, but what I would say is he's a hard worker, he's very humble. I appreciate the way he approaches the game. …

"I really like how he's come in and who he is. You only get to know these guys so much before you put your name on them and draft them. He's been such a great young man to work with. We're excited with where he's headed, but he'll have a lot to prove as a rookie this year.”