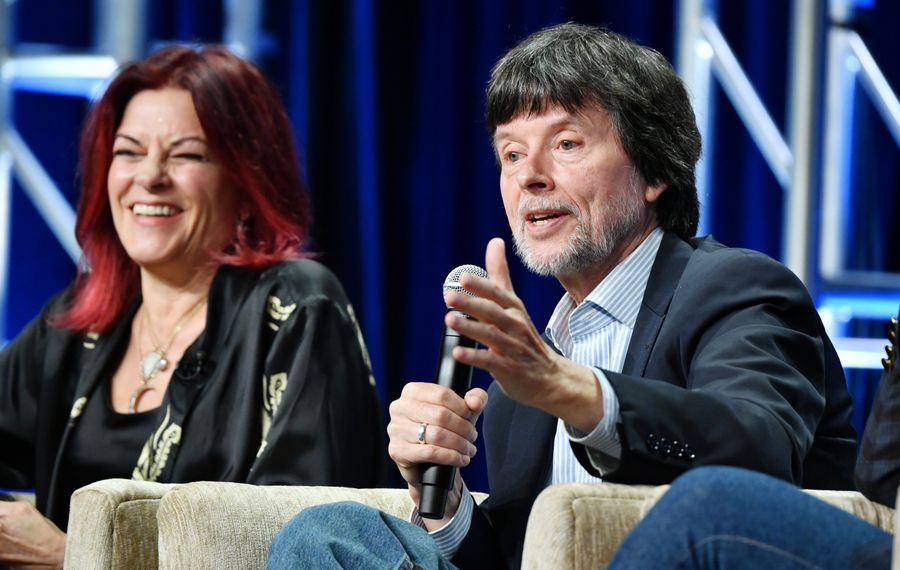 We know the drill by now with Ken Burns.

First comes the whopper – a book, usually a big, bountiful and utterly extraordinary illustrated history of America by Burns and a collaborator. If music is involved, there's also likely to be a multi-disc historical anthology of his epic subject. In the case of his "Jazz," series, it became a stunning and irreplaceable revival of classic jazz recordings.

Then came the TV show parsed into a PBS mini-series.

It was that way (sans music) with The Civil War, Vietnam, Baseball and then Jazz (of course, with music). They were huge, multi-volume documentary epics for TV. Now with collaborator Dayton Duncan we have Burns' introductory gorgeously illustrated history of Country Music going on sale next week (Knopf, 533 pages, $55). A five-disc set is from SMG records.

Burns knows what he's doing in the documentary epic business. A bursting anthology of tales about jazz presumably takes some sophistication and no small intellectual curiosity. Here, though, is what he's trying to say in his introduction to his big, magnificently illustrated history of Country Music:

"We found ourselves searching each others' eyes for help as we listened and watched finding that we were all unexpectedly in tears as the lights came back on in our editing room after a screening. At first, we didn't understand the music's great gift. Finally we realized it was right in front of us, in the elementary directness of the songs nearly everyone we interviewed spoke about and the startling complexity of the artists we ended up highlighting in our series. In the end, it came down to recognition – of ourselves, of the other and the immense power at the heart of these words and music."

To find the new Burns epic series on PBS, tune into PBS on Sunday, Sept. 15, for its opener. In the meantime, the first massive wave has crashed on the shore for that perfect American combination of hype and education.

For obvious reasons, those who could most easily be slathered with the curse of being called "intellectuals" had to take, second, third, fourth and fifth looks at all those expressions of American culture that spent too many decades being denigrated as beneath contempt.

In her credo at the beginning of her hugely readable book of TV series reviews "I Like to Watch" (Random House, 367 pages, $28), Emily Nussbaum admits once regarding TV "the way America had been taught to since the 1950's. Television was junk. It wasn't worthy of deep thought, the way that books or movies might be. It was something you enjoyed, then forgot about. It wasn't until my thirties that I had what amounted to a soul shocking-conversion."

It happened watching "Buffy the Vampire Slayer" on "a night that I watched Sunnydale High School principal Bob Flutie die, torn to bits by hyenas."

Video, on demand and audiences changed all the old rules. No more knee-jerk dismissals of the "boob tube" and "the idiot box." The most daring literary writers in the country were turning up on Charlie Rose to talk about TV. Then she had her "trance of joy" watching Buffy. You'll have to read it for yourself. So much for the proper literary doctorate she had, at the time, been working on.

She won a Pulitzer as the New Yorker TV critic.

Something analogous – though not nearly as celebrated – happened to former Time Magazine theater critic Richard Zoglin when he wrote "Elvis in Las Vegas" (Simon and Schuster, 296 pages, $29). Neither of his book's constituent subjects is commonly considered serious in harrumphing intellectual circles. When they're in the hands of an uncommonly brilliant and long-overlooked writer, something arresting happens to both your cardinal understanding of both Elvis and Vegas – individually and together.

Get a good writer interested in what others find beneath contempt, and contempt winds up being redefined in new and uncomfortable ways. Zoglin was smart enough to take the revolution in '70s comedy clubs with proper seriousness in "Comedy at the Edge" and then to dive all the way into the life and meaning of Bob Hope.

He knows how intellectually unpopular it is to think seriously about American popular entertainment at the same time how crucial it can be. His premise in "Elvis in Las Vegas" is that Elvis re-invented the Big Vegas Show (now standard for a certain kind of performer) after he and Steve Binder put together Elvis' 1968 "Comeback Special." Let others penetrate the smaller subjects that clutter up America's mainstream cultural agenda, Zoglin would stick to giant historical names and mine the huge veins of new material they offer.

The absolutely essential book for the 21st century that so many other 21st century books have been leading into is the new book that was implicit as long ago as the Reagan years when Neil Postman worried bluntly in his book title that America was "Amusing Ourselves to Death" (as an odd corollary see Ken Jennings' – yes, Ken Jennings' – book about American culture's comedy takeover).

That is James Poniewozick's "Audience of One: Donald Trump Television and the Fracturing of America" (Liveright, 325 pages, $27.95).

One way, in other words, that "amusing ourselves" brought "death" forward.

That's the nightmare we can't help but fear – at the same time we fear what will happen when we wake up.