Downstairs, in the gallery’s 1962 addition, a stream of young visitors paused for portraits in front of Dan Flavin’s glowing light sculpture from 1971, which has become one of the most popular Instagram destinations in Buffalo. (Search #albrightknox on Instagram and scroll through a flood of fluorescent light.)

Meanwhile, in the gallery’s sculpture court, a group of SUNY Buffalo State fashion students dressed for a photo shoot stood in front of a sprawling sculpture of pots and pans snapping selfies and gawking at the building’s neoclassical grandeur.

“It’s pretty dope,” Buffalo State graduate Mohamet Mbaye said of the gallery’s architecture and collection. “I could not stop looking at it.”

The Albright-Knox is cool again. For an important part of Buffalo’s millennial and Gen Z population, the contemporary American art museum has shaken off its stodgy reputation and become the place to be.

At the gallery, which will soon close in advance of a two-year construction project, almost half of visitors are between the ages of 18-34. At the Cleveland Museum of Art, only a third of visitors were that age last year. At art galleries in general, “often the average age will be somewhere in between 55 and 65 or 55 to 60,” said Jennifer Foley, the Albright-Knox’s education director. The Albright-Knox’s youth movement, she said, “is an extremely enviable statistic.”

How did they do it? Staying open in the evening, programs focused on youth and young families, a high-profile public art program and, not least of all, using social media to reach a younger audience.

“What might be drawing younger visitors, what are they looking for and what do we provide to make sure they come back?”

"And like that, it’s all over. Today was our last day together as the #FutureCurators so we had a potluck and decided to re-create the first photo we ever took together. The last day to check out our exhibition 'Somewhere Behind, Somewhere Ahead' is this Sunday, May 12!" (🔤 & 📸 by Faith Mikolajczky) #albrightknox #artmuseum #akteens #keybank @keybank #2019futurecurators #futurecuratorsfridays

For Angel, the 16-year-old poet, the Albright-Knox is a place of wonder and comfort. The 10th grader at Olmsted High School produced about a dozen made-to-order poems during an April event.

The poem he wrote for a reporter, based on Courbet’s 1864 painting “La Source de la Loue,” came typed in faint red ink on Just Buffalo letterhead. “Dark currents wrinkle the tips of my fingers but I don’t care,” Angel wrote. “There is no better sensation.”

“Being there, it’s a very comforting kind of feeling,” Angel said of his visits to the gallery, “and I always like looking at art, because I feel art is an expression of the unknown and what we cannot put into words.”

Generations past may have seen art galleries as temples of terminal boredom, but gallery leaders are changing that with events like the teen-focused First Fridays that drew Angel and his fellow teenage poets to the gallery. The Albright-Knox has poured unprecedented resources into programs such as “Art School,” which offers free tours and subsidized bus transportation for about 18,000 pre-K through 12 students a year; “Art on the Go,” an after-school program currently serving nine local schools; and the Future Curators program, which draws student artists and curators from across Western New York.

“If we think about museums as powerhouses of creativity," said Foley, the Albright-Knox education director, "then there is kind of a natural affinity between a demographic that is a little more inclined toward something like Instagram.” 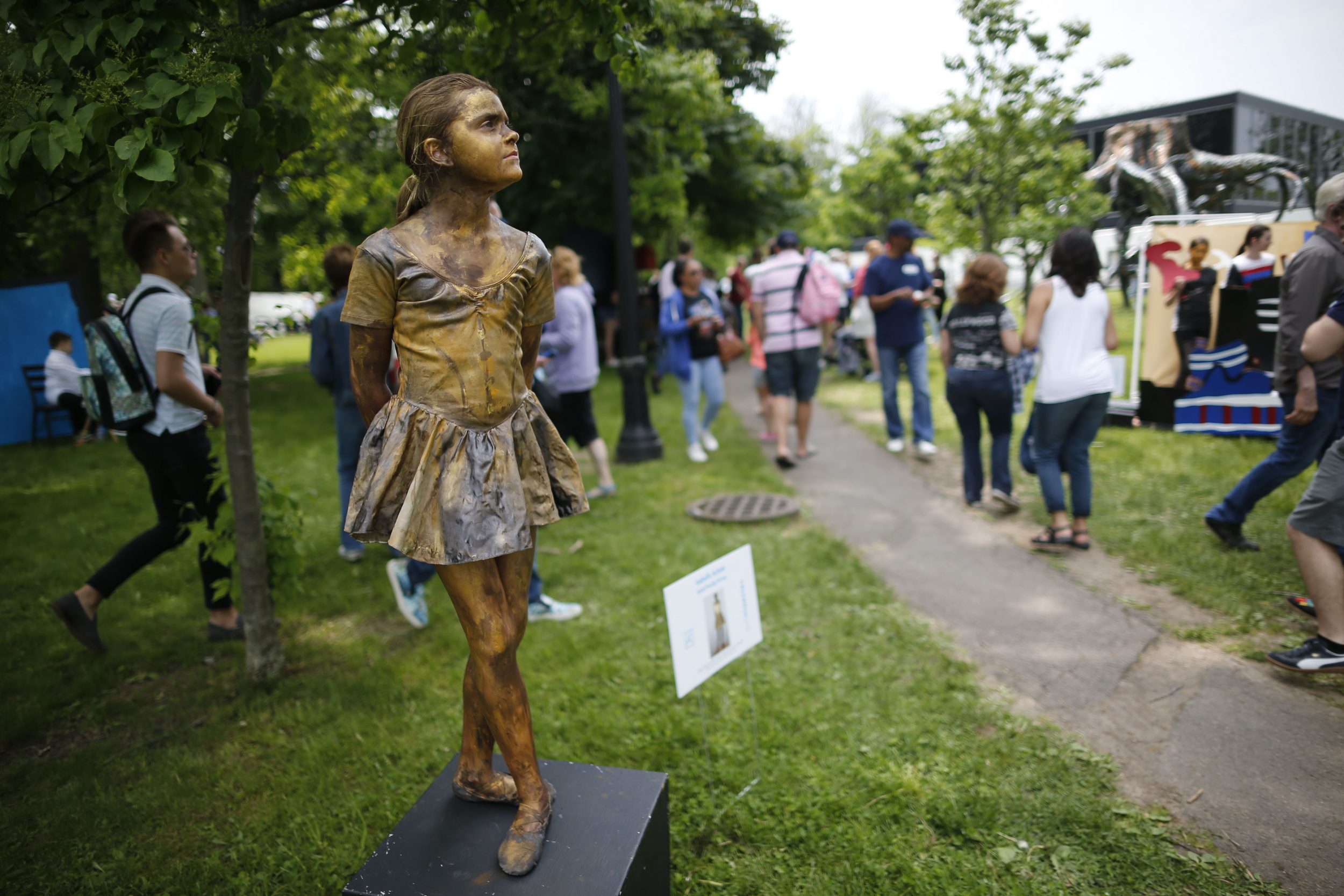 Outside the gallery on a bright morning in early June, Isabella Achatz, a 7-year-old ballet dancer and aspiring veterinarian, stood motionless on a black box with her head poised and feet locked in fourth position.

With hair covered in gold spray paint, a leotard flecked with streaks of black, gold and brown and her body painted a deep bronze, she was the picture of Edgar Degas’ sculpture, “Little Dancer of Fourteen Years,” if about half the subject’s age.

As Isabella stood frozen on her platform, children ran up to test if she was metal or skin. For two hours, as part of the gallery’s annual Art Alive competition, she drew stares and compliments, and finally earned the People’s Choice award for her portrayal.

“I almost fell off the box a couple times," said Isabella, whose mother teaches art at Nichols School. "And the ballet shoes hurt my heels a lot.”

One thing young audiences are looking for, museum experts say, is the opportunity to interact, experience and create art rather than just mulling it over in silence. With fingernails painted rainbow colors and hands smudged with purple marker, Isabella is clearly artistically inclined. But after Art Alive, Isabella said, her friends are becoming more interested in art.

“It’s kind of like a trick,” she said of the gallery’s attempt to win over students. “Maybe if more kids try it, they would see how gorgeous art is and what art is really all about.”

All this youth- and family-friendly activity creates a much different museum experience.

“When I was growing up, museums were often seen as kind of stuffy or staid or they were the quiet places where you were on your best behavior,” said Elizabeth Merritt, director of the Center for the Future of Museums at the American Alliance of Museums.

Says Janne Siren, the Albright-Knox director: “Today, museums are much more about a participatory, discursive experience. We can no longer conceive of ourselves as repositories for objects.”

On a recent Sunday, Tyler Pfalzer, 25, posed dutifully in front of Dan Flavin’s light sculpture for his girlfriend Jennifer Bouck, 22, who snapped a moody portrait of him for her Instagram feed.

“At the Toledo Museum of Art we have a lot of installations with neon lights, and it was pretty popular back in high school to take photos in front of them,” said Bouck, who was visiting from Toledo.

It is a crucial fact about art in the age of Instagram: For many millennial and Gen Z gallerygoers, the value of a sculpture, mural or painting is directly proportional to how it looks as a portrait background. Said Chloe Patrick, a 23-year-old bathed in the fluorescent glow of Flavin’s sculpture: “This is the most Instagrammable area, for sure.”

Judging only by social media appeal, the gallery’s popular public art program, which features dozens of murals and other public-facing street art projects, has grabbed the attention of audiences who might never have considered visiting the gallery.

At Logan Hicks’ new Washington Street mural featuring a Buffalo street scene as well as the newly psychedelic façade of the Town Ballroom, streams of pedestrians take photos of the new downtown landscape. The same goes for the gallery-sponsored “Freedom Wall” on East Ferry Street, “Shark Girl” at Canalside and a dozen or so other Instagram-ready public art projects the gallery has commissioned since its public art partnership with Erie County and the City of Buffalo began in 2013.

“This is a real shift, conceptually, of what museums are, what they mean to communities, how they interact with their communities,” said Foley of the Albright-Knox. 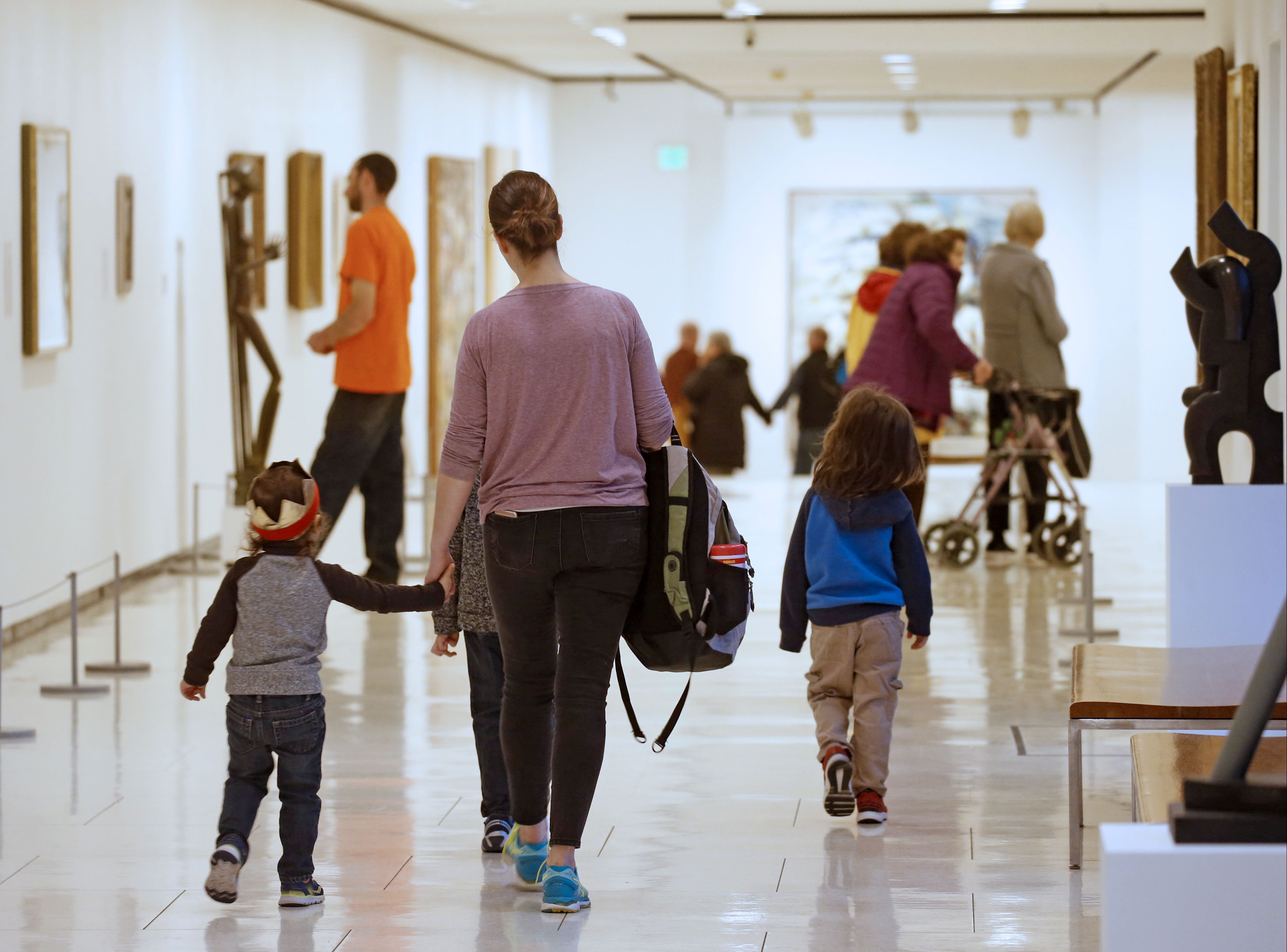 Part of the gallery’s strategy to attract the key 18-34 demographic is “Family Funday,” which offers $5 admission for families with young children on the second Sunday of each month. It features stroller tours for infants and art activities for kids.

On a recent Family Funday, the Tolnay family — Sean, Nikki and their 6-year-old daughter, Helena — huddled together at a long table in one of the gallery’s art classrooms. Helena concentrated on a green piece of construction paper perfecting her own interpretation of Flavin’s popular light sculpture — the art activity of the day.

The Tolnays moved back to Buffalo last year from Los Angeles. They came home, Sean Tolnay said, because they wanted to raise Helena “the way we were raised” — and that includes as many trips to the gallery as possible.

"I had an aunt who took me here all the time as a kid, and that was a big part of my childhood,” Sean Tolnay said. “I came here about 1,000 times as a child and I loved it.”

The July Family Funday was the Tolnays’ fourth visit in as many months. They first started coming because of a monthly children’s yoga program the gallery offers, but soon branched into other kid-friendly art activities.

“It’s a nice way to consistently expose her to the art here, in a really easy, kid-friendly way,” Nikki Tolnay said as her daughter dotted a sheet of construction paper with purple marker. 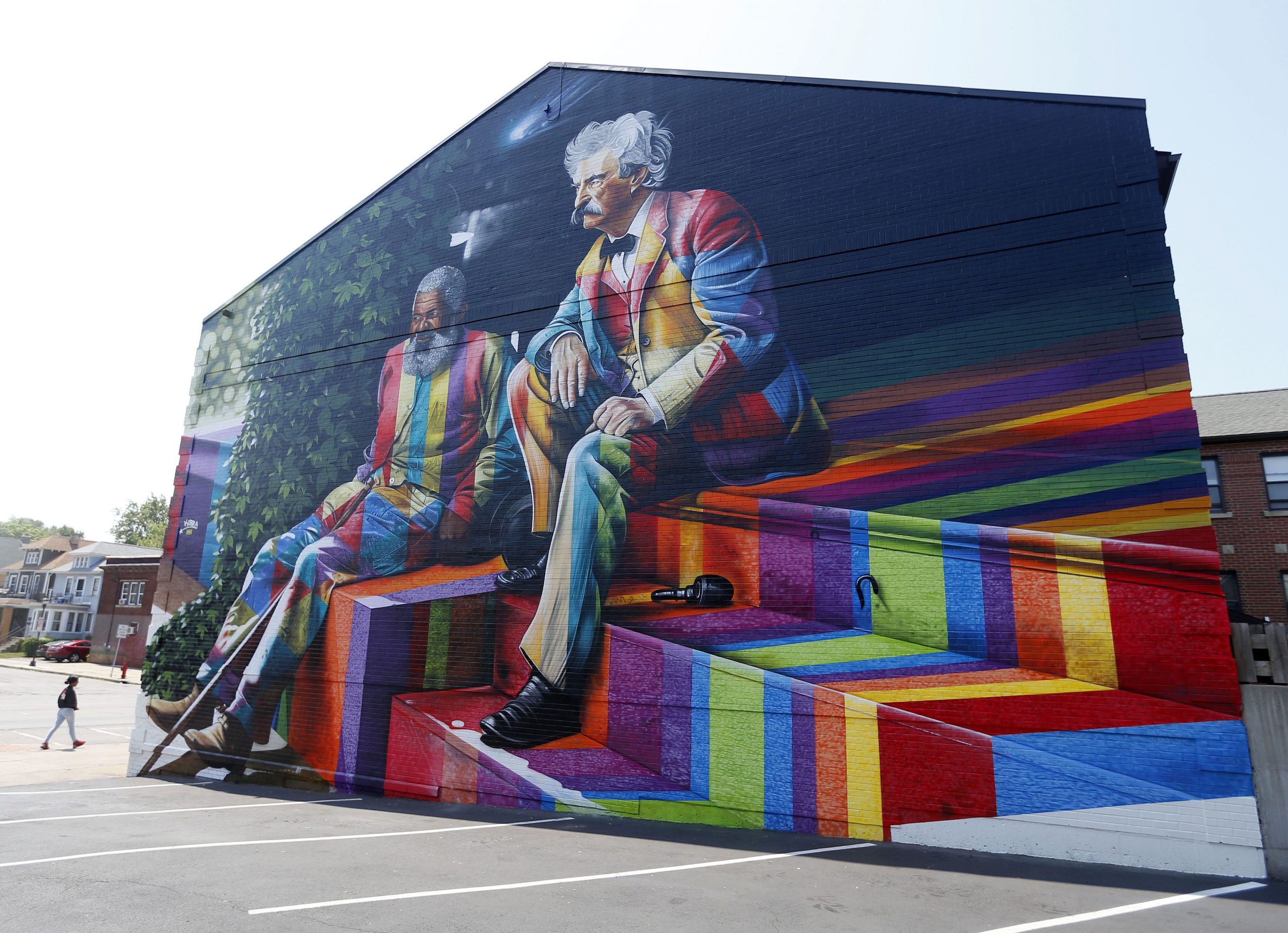 Merritt, the American Alliance of Museums official, said many American art museums are wooing younger visitors with approaches that might have struck museumgoers as radical in decades past.

They extend hours into the evening. They create opportunities for visitors to engage and participate with art, launch activities designed for families and invite younger members to serve on the museum boards.

The Albright-Knox's exhibition, “We Wanted a Revolution: Black Radical Women, 1965-85,” for example, saw the creation of a special committee of community stakeholders and others for whom the show’s message was specifically designed.

The gallery’s Convergence Council hosts exclusive events intended to groom the gallery’s next generation of donors and supporters. So far, the council has hosted five events with about 150-200 invited guests in their 20s, 30s and 40s, featuring trendy extras like kombucha cocktails and artisanal Pop Tarts.

“It’s reached out into the community instead of being on its own corner there on Elmwood,” said Jonathan Amoia, 38, a co-founder of the council. “It’s bigger than just a place to come and see art.”

Said Merritt of the friendlier approach: “It’s not just for a certain subset of people.”

For Siren, who arrived in Buffalo from Helsinki in 2013 and almost immediately accelerated the gallery’s civic ambitions, the youth movement bodes well for the future of an institution that will soon be known as the Buffalo Albright-Knox-Gundlach Art Museum.

As the museum embarks on its first major expansion in more than 50 years, he said, “We will have ways in which the public can be much more a part of it — not just as the reader, but also as the author.”