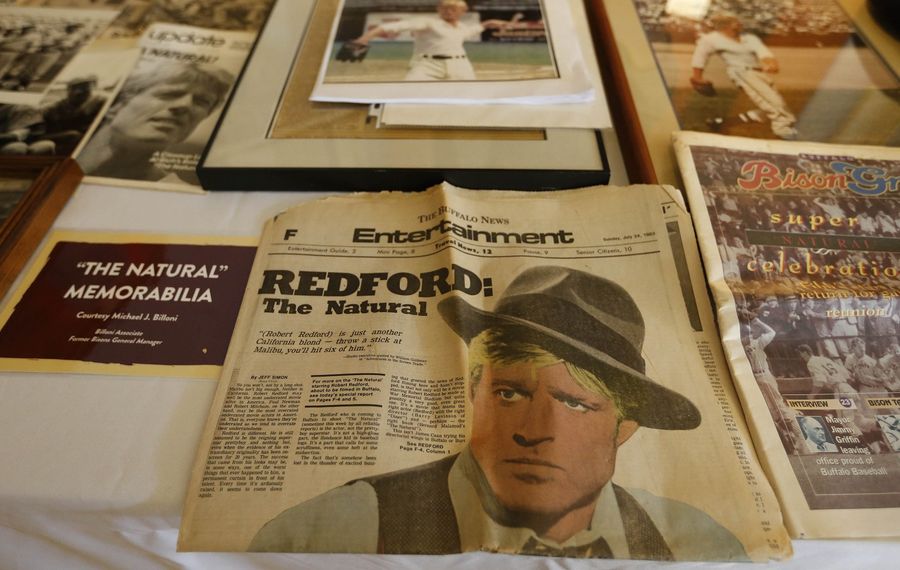 What we knew in 1983 is that no matter what happened in the future, "The Natural" would always be the most memorable film made in Buffalo.

It isn't that it's a truly great film, mind you. It's a good and enjoyable one, to be sure. To some, it's the greatest baseball film ever made. (Let's not tell them about "Pride of the Yankees" or "Bang The Drum Slowly." Why ruin their day?)

What it was, though, was a perfect storm of Hollywood and local community involvement that guaranteed the making of the film would always have the greatest role in Buffalo's filmmaking history.

If you were trying to confine matters strictly to box office figures, there's every chance "A Quiet Place 2" could exceed "The Natural." Horror and terror have an automatic box office. Literary mythography about baseball? Not so much, not even in 1984.

We knew how great "The Natural" would always be in the hearts of Buffalonians when that truly singular and mind-boggling cast suddenly took up residence among us.

Yes, yes, Robert Redford starred as Roy Hobbs. The cast surrounding him was almost on the level of "Casablanca" or "Gone With The Wind" in a different era. We noted them as they arrived in town with growing disbelief: Robert Duvall, Glenn Close, Kim Basinger, Barbara Hershey, Wilford Brimley, Robert Prosky, Darren McGavin, Richard Farnsworth, Joe Don Baker, Michael Madsen.

No matter what director Barry Levinson could possibly do to foul it all up (and he was emphatically not known for such destruction at the time), there was a level beneath that such a gilded cast could never sink. Only legendary and soon-to-be-immortal incompetence could misuse such a cast completely and that, to put it mildly, was not what director Levinson and producer Mark Johnson were known for.

Add to the "masterful" and "legendary" side of the film's ledger was cinematographer Caleb Deschanel, one of the all-time greats ("Black Stallion," "Being There," "The Right Stuff"), as well as the father of actresses Emily and Zooey Deschanel.

How did such a mind-boggling parade of talent find its way here?

What you have to understand about "The Natural" now is it was the first film of a new film studio eager to make a huge introductory splash – TriStar Pictures, in which Columbia, HBO and CBS briefly thought they might make common cause when spectacular budgets were needed.

"The Natural" – with the hugely popular Redford in the lead role – was going to be TriStar's irresistible calling card. The actors hired were the cream of the era's character actors.

Nor was that all, by a long shot. "The Natural" came to town not long before Bob Rich was trying for all he was worth (and with Jimmy Griffin's help) to bring major league baseball to Buffalo. That meant that both ends of the Buffalo establishment were solidly behind the film – Jimmy Griffin's populist fans and Rich's wealthy movers and shakers.

Costs were allayed, privileges were extended. No one seemed to get in the way of "The Natural." A community of film and baseball fans treated the film as if it belonged to everyone. Redford once told a biographer the film's warmth was a direct result of all the "love" surrounding the shoot (whether he was ironically referring to some cast members' extracurricular activities during shooting down time is up for readers to decide).

In addition, this publication welcomed the cast and crew's arrival in Buffalo with an unprecedented five-page Sunday entertainment section acquainting residents with just how promising was the film project that had sweetly invaded our town.

That perfect storm played out in the summer of 1983 and hit theaters in 1984. The film was, for the most part, blessed from the beginning. The cast alone seemed as mind-boggling as predicted.

Which brings up an interesting 21st century possibility. There is talk – and there is only talk at this stage – that visionary director Guillermo del Toro's merest presence one night at Chef's inspired the idea he was scouting locations for his next big film project, a remake of Edmund Goulding's ultra-dark movie with Tyrone Power, "Nightmare Alley."

Let's freely admit no "perfect storm" has, of yet, attached itself to the "Nightmare Alley" remake. Its home, as with so many films, will likely be neighboring Toronto. All we have here are hopes and ripe show business gossip and the rather unaccountable presence of the director in our legendary Italian eatery Chef's.

But let's just reconsider a little "The Natural's" all-time dominant status in local filmmaking, if indeed del Toro were to pull his film into town to shoot the way Levinson once did.

At this preliminary stage, del Toro's movie productions are all rumors and rumors of rumors.

But, good Lord, what splendid rumors and rumors of rumors have so far attached themselves to the remake in film production reports.

What is whispered quite noisily is that Bradley Cooper, who both directed and starred in the remake of George Cukor's "A Star is Born," will star in "Nightmare Alley's" Tyrone Power role of show business corruption made visible. Look in the film chatter mags and IMDB and you see many of those rumored to be – at this moment – attached to the film in a "wow" cast of Cate Blanchett, Rooney Mara, Michael Shannon, Willem Dafoe, Ron Perlman and Richard Jenkins.

If, by some unlikely chance one day, we were all suddenly to look up and register that such people inhabited Buffalo for a little while to remake some of Goulding's dark masterwork? We'd have a definite contender, if so, for "The Natural's" imperial status among locally made movies.

Anyone who knows "Nightmare Alley" – novel by William Lindsay Gresham, film starring Power in the darkest role of his life – might well think Buffalo to be a perfect location for it in the 21st century: All that delicious vintage architecture, all the struggling showbiz locations of yore so perfect for "mentalist" Stanton Carlisle and his act all over the extraordinary rural locations (Cattaraugus Creek's and Zoar Valley's gorgeous and perilous gorges).

Predictably, though, for del Toro, the film is said to be a very free remake of the ultra-dark '40s classic.

Let me freely confess at the moment to knowing nothing that hasn't been in Variety and the Hollywood Reporter and on IMDB.

I don't know about you, but I'm hoping it all falls into place and a brand new film spectacle comes to find a perfect home here – however temporarily.