A New Hampshire man who alleges a Buffalo priest sexually abused him when he was a youngster in Springville is suing the Diocese of Buffalo in federal court.

Arthur Porada Jr., 61, said in court papers filed this week that James A. Spielman molested him multiple times from 1971 to 1976 when Porada was a parishioner of St. Aloysius Church in Springville. Spielman was associate pastor of the parish at the time.

It's the second time in five years the diocese was sued in federal court over a child sex abuse claim against Spielman.

Porada’s lawyer is Michele M. Betti, who sued the Buffalo Diocese in 2014 in federal court in Hawaii on behalf of David Husted of Texas. Husted, 53, also accused Spielman of repeated acts of sexual abuse from 1979 to 1982 when Husted was a student at Archbishop Walsh High School in Olean.

Husted’s lawsuit led to a $1.5 million settlement – the largest single settlement that has come to light so far in the Buffalo Diocese for a clergy sex abuse case.

Porada’s case was filed in the U.S. District Court for the Western District of New York. He is the first plaintiff in Western New York to use the federal court system under the state’s Child Victims Act, which suspended the statute of limitations in previously time-barred child sex abuse civil cases. It has prompted more than 100 lawsuits to be filed in State Supreme Courts in Erie and Niagara counties since a one-year window for filing claims opened on Aug. 14.

Betti said she was able to file the case in federal court on diversity grounds, because Porada lives in New Hampshire and the defendants are in other states.

A federal lawsuit was likely to proceed more quickly than a case filed in the state court system, said Betti.

“We’re not waiting to have these cases consolidated and have them take years to decide. There’s less tactics defendants can play in federal court. You get your trial date right away,” she said. “And we want to expose the Diocese of Buffalo for their transferring of a serial perpetrator from school to school.”

Federal courts apply the laws of the states in which they operate, so the Child Victims Act’s suspension of the statute of limitations extends to federal cases like Porada’s, said Betti.

Betti took a similar approach with Husted’s case in Hawaii, which offered a two-year window for victims to file lawsuits without being time-barred by the statute of limitations.

Also this week, the Buffalo Diocese was served with formal legal discovery requests for documents by two law firms working in partnership on lawsuits filed under the Child Victims Act.

The Marsh Law Firm and Pfau Cochran Vertetis Amala asked for records on 10 priests accused of abuse in an Aug. 14 lawsuit, including any documents on them that were sent or received by the Vatican or any law enforcement agency, any records on the men in the diocese’s “secret archives,” and any therapy, medical and counseling records “relating to sexual deviancy treatment.”

The diocese has 20 days to respond to the records request or object to the court.

At least five people have publicly accused Spielman of abuse. In 2002, Tobin M. Gilman revealed that the diocese in 1994 paid $150,000 to settle his sexual assault complaint against Spielman. Gilman, a former altar boy, accused the priest of repeatedly molesting him in an Allegany County cabin and in various parish rectories in the 1970s.

A woman identified in court papers as E.W. alleged in an Aug. 14 lawsuit that Spielman sexually abused her from 1971 to 1972, when she was 12 or 13 and a parishioner of St. Aloysius. The law firms handling the case on behalf of E.W. requested the diocese's files on Spielman.

Betti said she believes Spielman abused many other children, perhaps more than a thousand. She also said the diocese knew about his problem and continued to shuffled him from parish to parish, putting more kids in jeopardy.

“We feel we have a very, very good case. This person was a clear abuser,” she said. 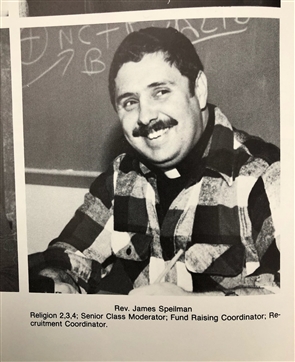 Spielman, 73, was ordained to the priesthood in 1970 and assigned as a summer chaplain at Camp Turner, an overnight diocesan youth camp in Allegany State Park, near Salamanca. In the 1970s, he served at parishes in Springville, Jamestown and Salamanca, and he was assigned to teach at Archbishop Walsh in 1978. He later served at St. Mary Catholic Church in Canaseraga and SS. Peter and Paul Church in Jamestown.

Spielman was treated at Southdown Institute near Toronto from Dec. 26, 1989, to May 25, 1990, and again in 1993, according to court records in Husted’s case. Shortly after Gilman reported his alleged abuse to the diocese in 1993, Spielman resigned the priesthood and moved to Alaska. Spielman is believed to be living in Hawaii and he still owns property in Allegany County. The News has been unable to contact him for comment.

Porada attended St. Aloysius school from 1968 to 1972, and Spielman began abusing him when he was in eighth grade, he said.

Porada said Spielman took him to a retreat center known as “the Hill” in Scio, Allegany County, where after a day of cutting shrubs, mowing grass, gardening and other jobs, the priest offered him a beer and brought out pornographic magazines. Porada said he drank more beer and Irish whiskey and became intoxicated before taking a shower, during which Spielman molested him.

Porada said Spielman also abused him while lying naked in front of a fireplace and in the priest’s bedroom.

“After abusing plaintiff, Spielman would utter the words, ‘God bless you,’ and tell Plaintiff that he allowed him to let down his hair and be free sexually,” the lawsuit states.

Porada, who was an altar boy, said in the lawsuit that Spielman abused him in the church and in the sacristy before and after Mass.

Porada applied to the diocese’s compensation program in 2018 and was offered what Betti termed a “nuisance value settlement” that he rejected.

“He was offended by that, as he should be,” said Betti. “They offered him pennies, knowing that they settled a case for $1.5 million.”