For months, opposition has been steadily growing to the Bear Ridge Solar project, which would cover 900 acres of land in Cambria and Pendleton with solar panels to generate electricity that would be sold into the state power grid.

Many front lawns in the area have blossomed with placards opposing "industrial solar."

Cambria Opposition to Industrial Solar, a citizens' group, claims more than 300 members who oppose the project.

So do the town boards of Cambria and Pendleton and the Niagara County Legislature.

"I think the citizens group will be a key if they don't go forward," said Wright H. Ellis, Cambria's supervisor.

"We value input on the project from all members of the community. At this early stage, there have been many important topics raised by the community. Since it is early in the project, we do not have all of the answers," the company said in an emailed statement.

Cypress Creek plans to hire an community engagement coordinator and open a local office in September.

None of them could be reached to comment Friday.

"We don't want this solar prison in the middle of our town," said Susan Fischer, one of the leaders of the citizens' group. "It's only the three greedy farmers who want the money."

Joseph Ohol said last summer that Bear Ridge was paying $1,500 per acre for each year of a 20-year lease with a 20-year renewal option.

Ellis said he's not surprised by the growth of the opposition.

"Even before they started to organize, I was getting inquiries," the supervisor said.

And there are plenty of residents directly affected by the project, Ellis said after analyzing the map of properties the Ohols and Barone planned to lease to Bear Ridge.

"With the impact of solar panels on two or three sides on places like Meahl Road or Saunders Settlement Road, there's 361 homes we regard as directly affected," Ellis said.

"Some people are going to have this on three sides of them," Fischer said. 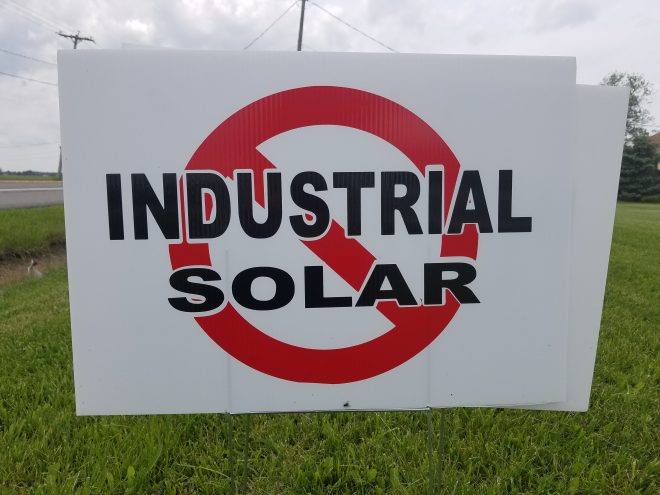 One measure of public sentiment might have been the June 25 primary election for the Town Board. Cambria is a Republican-dominated town where incumbents tend to serve for decades.

But Councilman Joseph Ohol, father of the men leasing land to Bear Ridge, came in a poor fourth in a four-way GOP primary, drawing only 105 votes. He did win the Democratic primary, which had a much smaller turnout.

Fischer said the Bear Ridge project threatens "the whole atmosphere of Cambria. We're a nice quiet town that doesn't have any industry."

Cambria does have an industrial zone, totaling 550 acres, 400 of which are vacant, Ellis said. That's far less than the amount of land Bear Ridge would use.

The town asked Bear Ridge to move its project into the industrial zone, which is where power plants are supposed to be, under Cambria's zoning law. The company has made no move to do so.

He said he's a co-sponsor of a bill that would make large-scale electric projects dependent on the result of a local referendum.

"We seem to have what I call carpetbaggers coming in, taking advantage of the methodology presented in Article 10 and attempting to interfere with the way of life local areas have come to know," Morinello said in an interview.

Cypress Creek's statement said it will soon offer a package of financial and energy benefits to Cambria and Pendleton.

"We believe they will make a significant and positive difference in the lives of people in these communities," the company said.

There are other concerns. Fischer said residents wonder what happens to the masses of solar panels when they wear out, or what the environmental impact would be if the panels caught fire.

"They've identified three or four elements in those panels. One of them is cadmium," Ellis said. "If that leached out, that would be a problem."

Exposure to cadmium over a long period causes cancer, and inhaling a lot over a short period of time causes lung damage and flu-like symptoms, the U.S. Occupational Safety and Health Administration says on its website.

The company said it must obey state and federal health and safety rules.

"We have constructed over 2 gigawatts of solar energy in projects across the United States, and we have successfully worked with local emergency responders well before project construction to develop response plans," the Cypress Creek statement said.

"This project is planned for 20 to 40 years of operation. Even before Bear Ridge Solar is built, we are required by Article 10 to have a decommissioning plan and surety bond in place for removal of the panels and equipment," the company added.

Article 10 of the Public Service Law governs the approval process for large-scale power projects, but the process has been little tested so far.

The Department of Public Service said 21 solar projects have begun the process, all since March 2017. So far only two have submitted formal applications — Bear Ridge Solar is not one of them — and no siting board has voted on any solar project yet.

State officials dominate the siting board, with five of the seven members being state department heads. But Cuomo and legislative leaders have consistently failed to appoint the two local members the law requires.

In late June, State Sen. Robert G. Ortt, who represents Niagara County, pointed out that no local members had been appointed for the boards that would consider 19 of the 25 energy projects then pending statewide.

"This is a pattern of negligence done in order to minimize the voice of local opposition and to push unpopular projects on communities across the state," Ortt charged.

Article 10 specifically says that if there are no local members, three of the five state officials on the board are sufficient to take action.

Both Cambria and Pendleton submitted lists of potential nominees to Albany in February. There has been no response.

Cypress Creek has called on Cuomo to make the appointments. "We believe having local representation on the board is important to transparency, and to advancing an equitable and fair process," the company said.

Cuomo was asked directly about his failure to make appointments to the Bear Ridge Solar board during a visit to Wilson last Tuesday.

"I don't know the specifics of this situation, but if you don't have local community representatives, I don't believe a project should move forward," Cuomo said.

Asked for his reaction to that, Ellis said, "I didn't put that much faith in it."