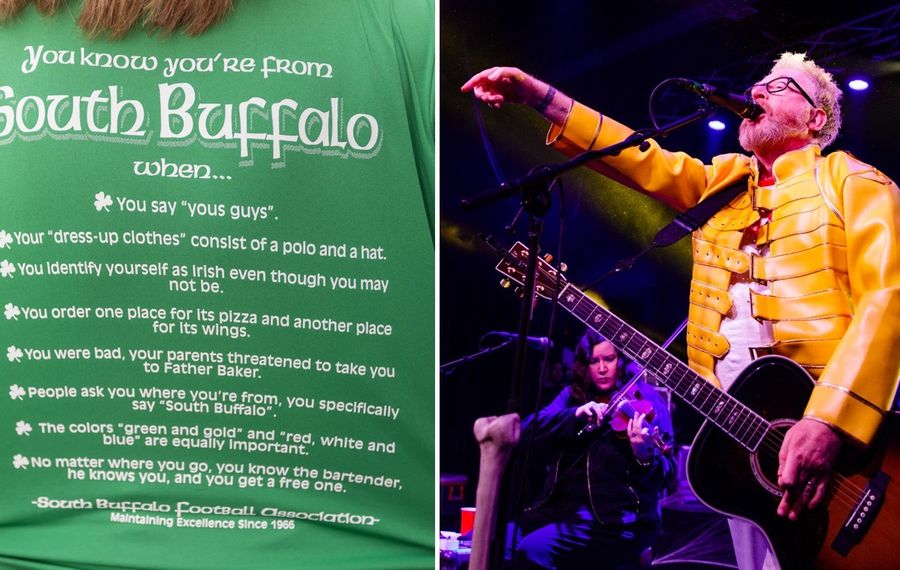 Christmas in July strikes many as a strange concept (or totally unnecessary), but nevertheless, it's celebrated in Buffalo. But what about St. Patrick's Day in August? Why not give that a chance?

This week's event list suggests the creation of another faux holiday, thanks to the arrival of Flogging Molly on Tuesday and the Irish-tinged Almost Halfway to St. Patrick's Day show that closes out the Live at Larkin season.

And, hey, even the Jonas Brothers – coming to KeyBank Center on Tuesday – are supposedly part Irish, which fits the theme.

Conserve energy on Monday, because you'll want plenty for this Tuesday show at Canalside. Both Social D and Flogging Molly have ample fan bases here in Buffalo, especially the former, which sold out Town Ballroom last year.

Don't think Flogging Molly is a distant afterthought, though; Dave King and his Celtic punk/hard rock band will saunter in with their fiddles, bodhrans, mandolins, tin whistles, banjos and accordions for a distinct departure from the co-headliner.

Despite the name change, a strong and familiar cast of characters will perform: Brian Higgins & the Exchange Street Band is an annual staple, while McCarthyizm steps in to inject Irish flair and incite jigging.

Look back at the Smiles from the Irish night at Larkin last year, with bonus Irish shots to the right.

Fans of the JoBros were concerned Friday when the three heartthrob brothers abruptly cut their show short in Toronto due to technical difficulties. (The crowd sang the encore songs a cappella, which sounded cool). An apologetic Nick, Kevin and Joe mustered a full set in the same city Saturday, however, which should alleviate worries heading into Tuesday's gig in KeyBank Center.

One reason you should buy tickets online: it's the only avenue to receive a complimentary copy of the band's recent release, "Happiness Begins." The singles "Cool" and "Sucker" are getting more airplay than you can shake a stick at. Bebe Rexha and Jordan McGraw are the support.

By now, if you're a fan of Foreigner, you have a refined appreciation for the classic rock band's catalog. Sure, it would be ideal to have all of the original members on stage, cruising confidently through "I Want to Know What Love Is" and "Feels Like the First Time," but that's just not the reality. Still, the music lives on, regardless of who's playing it.

Kelly Hansen has taken the lead singer's torch from Lou Gramm for the last 13 years, and it's certainly possible that Mick Jones pops up in Lewiston on Tuesday; the 74-year-old has made some random appearances during the present tour.

Battle for the Borderland finals: Uncle Ben's Remedy, doors at 6 p.m., show at 7 on Wednesday, Aug. 28 at Buffalo Iron Works (49 Illinois St.). No cost to attend.

Greg Klyma and Two Hills "Reloaded" have already played their final public auditions in front of the Battle for the Borderland judges, and Uncle Ben's Remedy is the last contender to play live before the winner is chosen to perform at the music festival at Knox Farm State Park on Sept. 22, Day 2 of Borderland.

All three of the finalists have survived two elimination rounds – one from the overall entry pool and another through a public vote – but the musicianship, quality of their original music and sharpness of their live sets factor into the judges' final decision.

It's not cheap for the Naval Park to preserve its fleet of ships, which seemingly stand guard at Canalside with their looming presence. The fundraiser Ship N' Shore will be stationed at a quieter end of the park, at Monuments Garden, close to the intersection of Erie and Marine.

The legendary six-piece from East Los Angeles has thrived in its near half-century as a band, tirelessly preserving Mexican American culture in the process. The Rock & Roll Hall of Fame nominees haven't rested on their laurels, either, releasing new music as recently as 2015's "Gates of Gold." Keep your eyes peeled for unusual instruments, too; sometimes Los Lobos will wield a vihuela or a guitarron.

The SHADE Project and Leaving Our Legacy – two programs dedicated to improving sexual health and fostering an inclusive community, especially with teens – will join forces with the Mocha Center for a block party with DJ Brei, a trap cardio session with Dominique Johnson, school supply giveaways, free refreshments and free testing for HIV, sexually transmitted infections and hepatitis C.

5 more quick hitters for this week