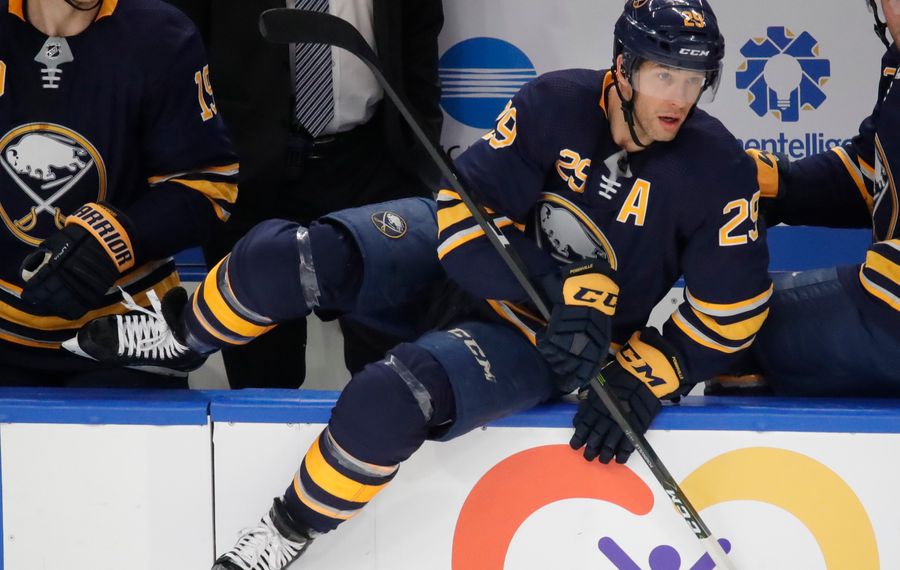 Jason Pominville wasn't done skating when he stepped off the Harborcenter ice while wearing a Buffalo Sabres practice jersey Monday afternoon. The 36-year-old winger planned on taking a break before walking to the adjacent rink, where he would help coach his son, Jayden, and the Buffalo Junior Sabres' Under 10-team.

That might be Pominville's only job once hockey season begins. He remains a free agent with NHL training camps opening in less than three weeks and an offer might not come until some of the league's restricted free agents sign contracts.

Though Pominville expressed confidence he can still play at a high level, he won't jump at just any opportunity. He is not sure if he wants to be apart from his family and doesn't want to uproot his children to move elsewhere for what could be only one year.

"You realize it might be close to the end, so you definitely think about it," Pominville said following the skate. "I’ve had time to reflect and see how I feel and see how the body feels. I think it’s clear in my mind that if something pops up that is a good opportunity and makes sense family-wise I would definitely consider it for sure. If not, I’m fine with the way things ended."

Pominville expected this sort of uncertainty. Players his age often have to wait longer for contract offers, but the market is unusual this summer because of the number of unsigned restricted free agents. Some teams are unsure if they have the cap space or roster spot to sign one of the many available players.

Though Pominville has heard from teams, he said there hasn't been an opportunity he would "hop on right away." A number of teams would likely be interested in bringing Pominville to their training camps on a tryout basis. After all, Pominville finished fourth on the Sabres with 16 goals last season and has been lauded throughout his career for his work ethic and leadership.

Sabres General Manager Jason Botterill told reporters throughout the summer he has left the door open for Pominville to return, adding that both sides have stayed in contact since April. Pominville's preference is to remain with the Sabres. Though his family lives in Montreal during part of the offseason, they have called Buffalo home since Pominville was traded back to the Sabres in June 2017.

While Botterill hasn't publicly ruled out a reunion, Pominville said he's not so sure there is a spot for him on the roster. The Sabres have a surplus of forwards entering training camp after adding Jimmy Vesey and Marcus Johansson this offseason. Aside from Alexander Nylander, Pominville is the only forward to depart from the team since April.

"There are a lot of guys," Pominville said. "[Botterill] has been awesome. He told me I can come skate and work out, use the facilities. At the same time, I’m kind of realistic. Look at the forwards, look at the D. There are quite a few bodies. I just don’t know if they have the ability to add players. For sure, that would be ideal for living here, especially."

Pominville will be remembered as one of the more beloved players in franchise history. He scored 217 goals among 521 points in 733 regular-season games during his 11 seasons in Buffalo, adding 12 goals among 28 points in 45 career playoff games with the Sabres.

When the Sabres hosted Ottawa last November, Kim and Terry Pegula commemorated Pominville's 1,000th career game by gifting him a silver saber. He proceeded to score two goals in a 9-2 victory over the Senators. Only 17 active players have appeared in more NHL games and only 21 have scored more goals.

With his goal in the home finale, Pominville took over sole possession of the 10th-most goals in franchise history and needed only six points to tie Don Luce for seventh in franchise history. Pominville was a healthy scratch three times during the Sabres' two-win month of March and averaged a career-low 12 minutes, 28 seconds last season.

"There is a little bit of uncertainty, but I kind of figured from the start it would probably take a little time, Pominville said. "I know the last few years guys my age it takes a little longer. Some of them are still undecided if they want to play, so it usually takes a little time. This year is kind of a special year too with all the big RFAs that aren’t signed, so I think that’s stalling a lot of the process, too.

"On my side, I’ve kept myself ready. I’ve worked out. I’m still unsure of what I’m going to do or what’s going to happen, but I just feel like I kind of owe it to myself to keep myself ready in case something happens."

In addition to helping coach his son, Pominville wants to be able to attend more gymnastics meets for his daughter, Kaylee, and be present in a way he could not while playing in the NHL. When Pominville does officially retire, he plans to begin a post-playing career in hockey, though he's unsure of what he'd like to do exactly.

For now, he'll continue to skate, coach and wait to see if he receives the right offer.

"I think family-wise is the most important thing," Pominville said. "I want [my family] to feel comfortable with the situation. It’s not easy for them. They’ve had to deal with a couple moves and all that. They’re comfortable here. We’ll have to make a decision if it comes up. I think my priorities are with them right now."