Bisons manager Bobby Meacham knows all about what it means to live up to hype. He was a first-round draft choice of the St. Louis Cardinals in 1981 and a top prospect for the New York Yankees after he was traded to them 18 months later.

That, of course, was before the Internet and the era of social media, where players as low as Class A ball are widely dissected long before they get to the major leagues. Fans all over baseball knew all about Vladimir Guerrero Jr. a couple years before he arrived in Buffalo last summer or in Toronto in April. The same is true for Nate Pearson now.

Pearson made his debut for the Bisons Tuesday in Rochester and pitched Sunday in Sahlen Field for the first time in his career -- and maybe for the only time if things go well next year in big-league spring training. At 23, the Blue Jays' No. 1 pick in 2017 has spent the last three years having his every move watched and hasn't disappointed anyone.

"You think you're really, really good and so when everybody has high expectations of you, you're used to it," Meacham said after Pearson fired six strong innings in the Bisons' 5-4, 11-inning win over Pawtucket. "It's been there for your whole life, so you're actually anxious to go out and show how good you are. You want to go out and make sure everybody believes in you and make sure everybody still thinks you can do that."

Blue Jays fans were ready to see the stud who projects as a future ace in the big leagues. The crowd was announced at 10,411, and there were strong lines at the ticket windows right to the first pitch, with lots of Toronto gear being worn in the crowd.

The regulars from Buffalo as well as the folks who crossed the border got an impressive show.

"Even with the highest expectations they can be, you're excited about it," Meacham said. "That's what it looked like with Vladdy, that's what it looks like with him. It's calm all week long between starts. His work habits have been outstanding and then he goes out. Today I watched him before the game. He was focused, calm and planning to go out and beat the other team."

After a rocky second inning, Pearson was locked in as he routinely hit 97-99 mph on the stadium radar gun. He retired 18 of the 22 hitters he faced, striking out seven and walking none. He allowed just two hits, as Jantzen Witte led off the second with an infield single and Bobby Dalbec followed by roping a long home run to left.

The second was a 26-pitch struggle but the home run was a turning point. Pearson retired the next 10 batters and didn't give up another hit. He left the game retiring 15 of the final 17.

"I just settled in," Pearson said. "It always takes me a couple innings to settle in, and once I get settled in, it's fun. I just start rolling with it and I just compete out there. I was just trying to get ahead, stay ahead, get quick outs, keep my pitch count low so I could go deep into the game."

Pearson threw 95 pitches, 60 for strikes. The fastball was consistently ranging from 94-96 mph, and there were plenty of pitches of 97-plus, topping multiple times at 99.

"He throws flames," said Buffalo center fielder Roemon Fields, who stroked the winning single in the 11th. "Big guy. I love having him on the mound. Good pace. Gets minimal contact and he's a dog out there. ... A heckuva kid and he's only going to get better." 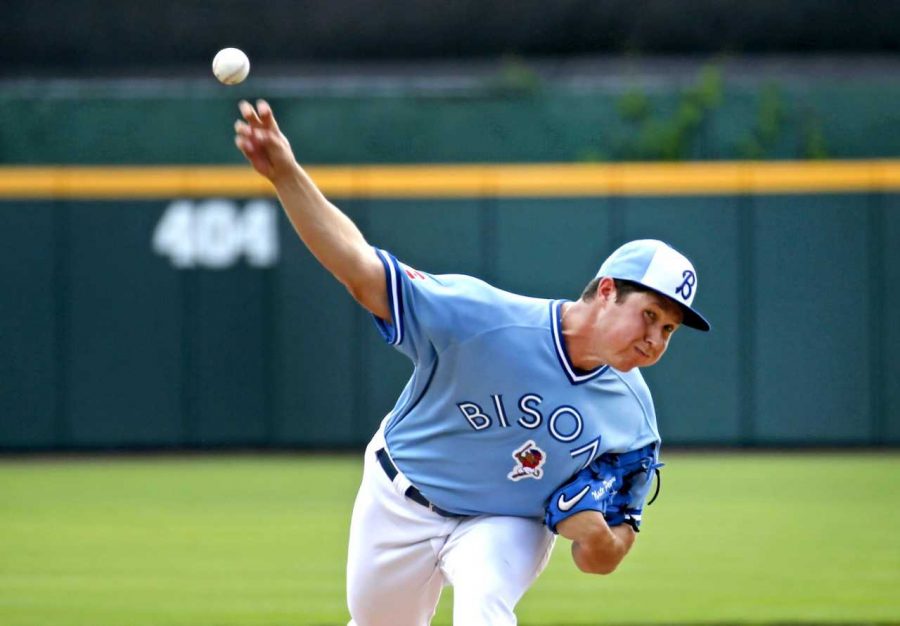 Meacham said he has been impressed with the way Pearson has a plan to attack hitters and particularly liked the way he responded to the bumpy second inning.

What is making Pearson particularly nasty is his ability to use offspeed deliveries as out pitches. Several of his strikeouts Sunday came on pitches that never crossed 85 mph. The slider and especially the curveball are quickly developing.

"I just have to trust it," he said. "The best way I'm going to be able develop it is to throw it a lot, and that's what I've been doing this whole year and since I came up here: Command my offspeed, command my fastball and throw strikes. The curveball today was my best pitch."

"If you can locate your fastball, especially at 96-97 mph, any secondary pitch you can get over is a big weapon," Meacham said. "Then all of a sudden your fastball gets better. It gets on guys quicker and that's kind of what we saw."

Pearson has shown no need to adjust to a new level on the mound. And there's been a quick clubhouse assimilation as well. Many of the Bisons were his teammates earlier this season in New Hampshire and more veteran members of the Herd were certainly aware of him in spring training.

"Guys like him. He's fun to be around," Fields said. "Good to have on the mound because you know what he's going to give us. When he came in and pitched, it's felt like he's been here all year. He's rolling in and contributing."

Pearson kept his team close, and the Bisons finally pulled out a win in the 11th on Fields' shot to right-center after failing to score in the 10th when they loaded the bases.

Buffalo is three games behind first-place Scranton/Wilkes-Barre in the IL North with eight to play. Red-hot Syracuse is just a half-game out of first. Pearson's final start is slated for Friday night in Scranton, with the Bisons hoping to still be in the race. The final home series starts Monday night at 7:05 against Rochester.

"I was very excited and pumped up to join the Bisons and try to make a playoff run here," Pearson said. "I signed some autographs before the game today. There were a lot more people out there [in the bullpen area] than usual. Just try to win a game for the fans. They made a great showing today and it was a fun atmosphere to play for."