From the Niagara Thruway, Buffalo's Cobblestone District looks like a neighborhood with a handful of old industrial buildings, a large casino and a bunch of parking lots.

But to Carl and William Paladino, it's a land of opportunity, ripe with potential for future development by taking advantage of underused sites.

That's been the case for decades, but it's even more so for the father-and-son team today, as the neighborhood has become more attractive for investment. And depending on what Terry and Kim Pegula decide to do with the Buffalo Bills, the Paladinos could be in the catbird seat – even if they never planned it that way.

That's because their Ellicott Development Co. is by far the largest property owner in that area – with designs on even more. And that part of the city has been identified as one of two possible downtown locations for a possible new football stadium, to replace the aging New Era Field in Orchard Park. The other option is just a few blocks away.

Today, Ellicott Development and its affiliate companies own 34 parcels in a 20-block area of the Cobblestone District and the Old First Ward. That's 20% of 165 properties – or one out of every five.

But others are trying to get into the game, too. The Pegulas have been buying property near KeyBank Center. And existing property owners have been trying to cash in by listing commercial buildings for sale at asking prices far above their assessed value.

Only a few properties have sold in the past few years, but the prices have soared. For example:

• The Pegulas paid $550,000 to buy the 12,560-square-foot Carr Building at 118 Michigan Ave. That's four times the city's estimated market value and six times the assessment on it, according to tax records. 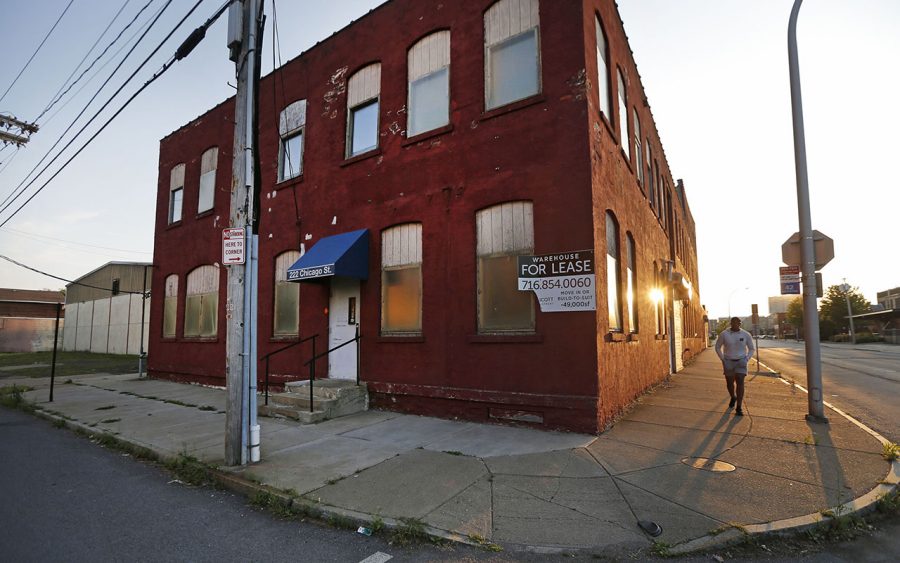 "We thought it was only a matter of time," Paladino said. "We didn't think it would take this long to progress, but with everything else going on in the city, it's better late than never."

Most of the Ellicott properties are vacant – with the notable exception of the Fairmont Creamery building at 199 Scott St. – so it wouldn't be difficult to combine them, either for sale to the Pegulas or to develop into a commercial zone that could capitalize on a football stadium nearby.

Such a consolidation would likely be needed to make a stadium project come to fruition. The Pegulas control six properties aside from KeyBank Center and Harborcenter, including four commercial or industrial properties on Perry Street and Michigan Avenue, plus the recently renovated Labatt House building at 79 Perry St.

They would need additional land for a stadium, and it's a lot easier to deal with just a couple of property owners than try to uproot a host of businesses and residents. Besides Ellicott Development, other significant property owners include the city and state, which are already part of the process of deciding on any future stadium.

But while Carl Paladino has called for the stadium to go into the Cobblestone District, citing the proximity to the DL&W Terminal and access to Metro Rail, the development firm isn't eager to give up its properties for a stadium. "We'd prefer not to sell our properties, but if they needed something to make it happen, we wouldn't stand in the way," William Paladino said.

Instead, Ellicott wants to benefit from the significant spin-off activity that would accompany a new sports venue in downtown Buffalo, capitalizing on such a development to create new residential and retail space around it – on land that they've owned for many years.

The Bills have been playing at New Era Field – formerly Ralph Wilson Stadium, and Rich Stadium before that – for more than 45 years, but the facility is widely considered to be outdated, even after $57 million in renovations in 1998 and another $130 million in 2012.

The team's lease for the stadium, which is owned by Erie County, expires in 2023, and questions have swirled about what the Pegulas will do next. Besides the two city locations and the possibility of building a new arena in Orchard Park, the Pegulas also are exploring the option of renovating the existing stadium – all subject to negotiation and agreement with both the county and the state. 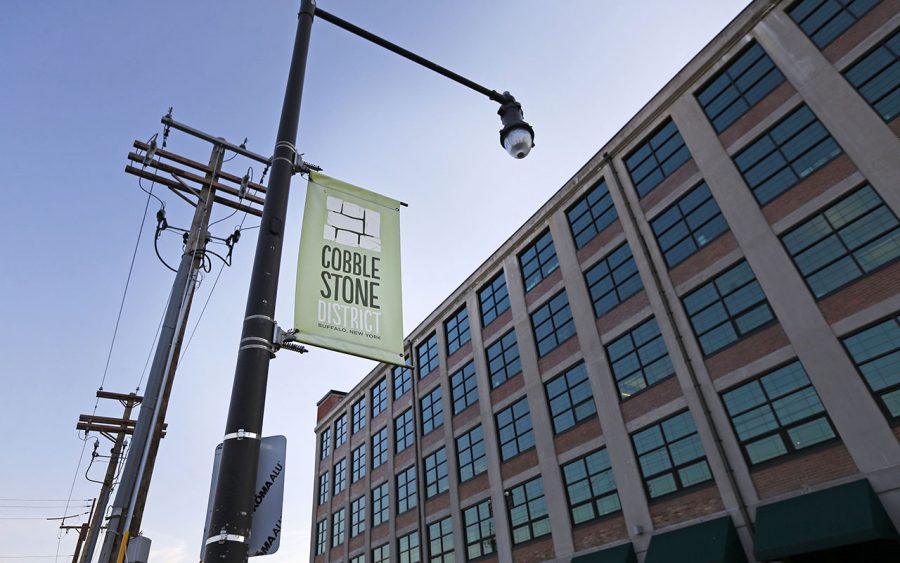 James Sandoro – another property owner in that area – said he'd love to see a stadium downtown, because of the effect it would have, not just on game day but throughout the weekend.

"To have that synergy of all the people downtown ... it would be a giant positive for Buffalo," said Sandoro, who founded the Buffalo Pierce-Arrow Transportation Museum.

Others in the area don't think a stadium is necessary to generate activity.

"I don’t think there’s anybody doing projects down there hoping or anticipating that a stadium will be built," said Roger Trettel, a local real estate investor and developer, who owns three properties in the neighborhood. "It stands on its own."

[RELATED: A 'Buffalo-style stadium' could be in our future. What does that mean?]

There's also no clear answer as to how to pay for a stadium that could cost well over $1 billion dollars, with significant funding from state and local government.

Pegula Sports & Entertainment last year hired Denver-based sports consulting firm CAA ICON to evaluate the various options, with a report expected this summer. The firm also named design firm Populous to handle the architectural and planning aspects of the privately funded study, which will also review potential renovations to KeyBank Center. Besides the Bills, the Pegulas also own the Buffalo Sabres and Harborcenter.

"We are several months into our study with CAA ICON," PSE spokesman Don Heins said earlier this summer. "As we’ve said from the very beginning, we are continuing to examine every possibility. It is too early to discuss any real estate possibilities."

The concentration of property in the Cobblestone District, as well as further south toward the Buffalo River, demonstrates the strategy that has made Ellicott so successful.

The family-owned developer is one of the biggest property owners in the city, and no other private company or individual comes close to Ellicott's holdings in the Cobblestone area and Old First Ward.

"We just thought the connection between South Buffalo and the Old First Ward had so much potential," Paladino said.

The developer owns 18 of 182 acres of land in that zone. Only the Buffalo Municipal Housing Authority's sprawling Perry Projects and the city's Father Conway Park – both publicly owned – come close. The Paladinos offered this spring to buy most of the Commodore Perry housing complex from the BMHA for $1 but were rebuffed.

The city is the second-biggest property owner in the neighborhood, with 18 properties, or just over half the total held by Ellicott and its affiliate companies. But much of that land is already in use, including the Perry Projects, the park and the home of the Edward M. Cotter fire boat.

Then there's the Seneca Nation, with its Seneca Buffalo Creek Casino, and Sandoro, who owns 10 properties on Exchange, Scott, Michigan and Louisiana – many for storage of his collection of antique cars – with plans to eventually restore some of his buildings to house other nonprofit tenants that will complement his museum.

"The museum is the epicenter of what we do. That’s why we acquired all those properties," he said. "It’ll all be very, very beneficial to the area."

Other real estate holders in the neighborhood include:

• HSBC Bank USA, with its Atrium on Washington Street.

• The Buffalo News at Washington and Scott streets.

Trettel owns the Ballyhoo Links & Drinks bar building at 211 South Park, plus a nearby parking lot and a two-unit mixed-use building that he's now renovating. He's also part-owner, with Savarino, of Iron Works at 49 Illinois.

But he wishes he had bought more. "I was looking down there 15 years ago, not understanding what potential it had, and kind of wished I would have taken a bigger position earlier," Trettel said.

Trettel is hoping to construct a four- or five-story building with 20 residential units and ground-floor retail space at his own site, but said that's probably at least a couple of years out.

"I think things are happening down there despite the threat of a stadium. It’s developing on its own organically," he said. 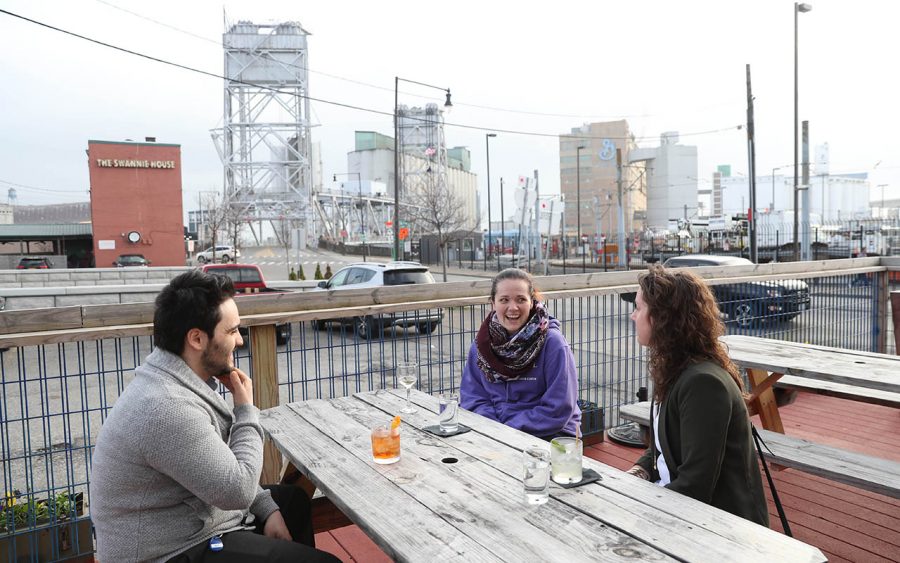 "How could we pass this up?"

Paladino said his father and a partner started buying properties on and around Louisiana and Ohio streets as early as the 1970s, starting with the current site of the Patrick J. Paladino Memorial Boathouse and the new apartment building at 301 Ohio St., as well as an old gas station across the street.

Even though there wasn't much there yet, the developer was attracted by the proximity to the Buffalo River. "One thing we've watched from other cities, you can never go wrong with water," he said.

That was followed by other purchases, as well as construction of the St. Brigid's Square strip plaza at Louisiana and South Park Avenue, with a Family Dollar store and a gas station and convenience store. "We just saw the potential down there, and how could we pass this up?" Paladino said.

Then, over the next two decades, the family continued "buying up a lot of stuff just to connect the dots, anticipating that the area was going to turn around," he added. Much of it was acquired through foreclosures or the city's in-rem auction, which means the prices were artificially low. The Creamery Building at 199 Scott, for example, was acquired at city auction in February 2001, for just $20,000. "Anything that came up in the last 25 years, we've looked to acquire," he said.

He admits there were times when they had second thoughts or questioned their strategy, but not any more.

"We're taking it bit by bit," he said. "We don't feel we need to develop all our properties all at once."