All four Buffalo-area NCAA Division I women's soccer programs kicked off of their 2019 campaigns with non-league matches on Thursday.

Half of these teams - the University at Buffalo and Niagara University - advanced to their respective conference playoffs last year, with the Purple Eagles' run to the semifinals marking the deepest of the jaunts.

Although there's been no head coaching changes among the Big 4 women's sides, there are plenty of fresh faces, new upperclassmen growing into leadership roles and some swansongs for top players we've seen for three years. Here's a head-first dive into the 2019 campaign.

State of the team: Last year was a tale of two halves for Shawn Burke's Bulls, who went 2-6 after superstar senior Carissima Cutrona suffered a season-ending knee injury. The squad lost its early season swagger and limped into the postseason, taking Ball State to double overtime in the quarterfinals before losing.

But the 9-2 start was filled with encouraging signs for the future of the side; local freshmen Emily Kelly (Wilson) and Tess Ford (Williamsville East) quickly seized starting roles and flourished, while Annie Judasz (Lancaster) excelled in training to earn minutes on the field.

Even without Cutrona, the Bulls will still be dangerous. Marcy Barberic potted seven goals last season and added the same number of assists, then earned the armband for her junior season. Kaitlyn Walsh, who found the back of the net six times, should be even more threatening with two years of physical MAC play under her belt. Gianna Yurchak goes about her business quietly, but she's effective. 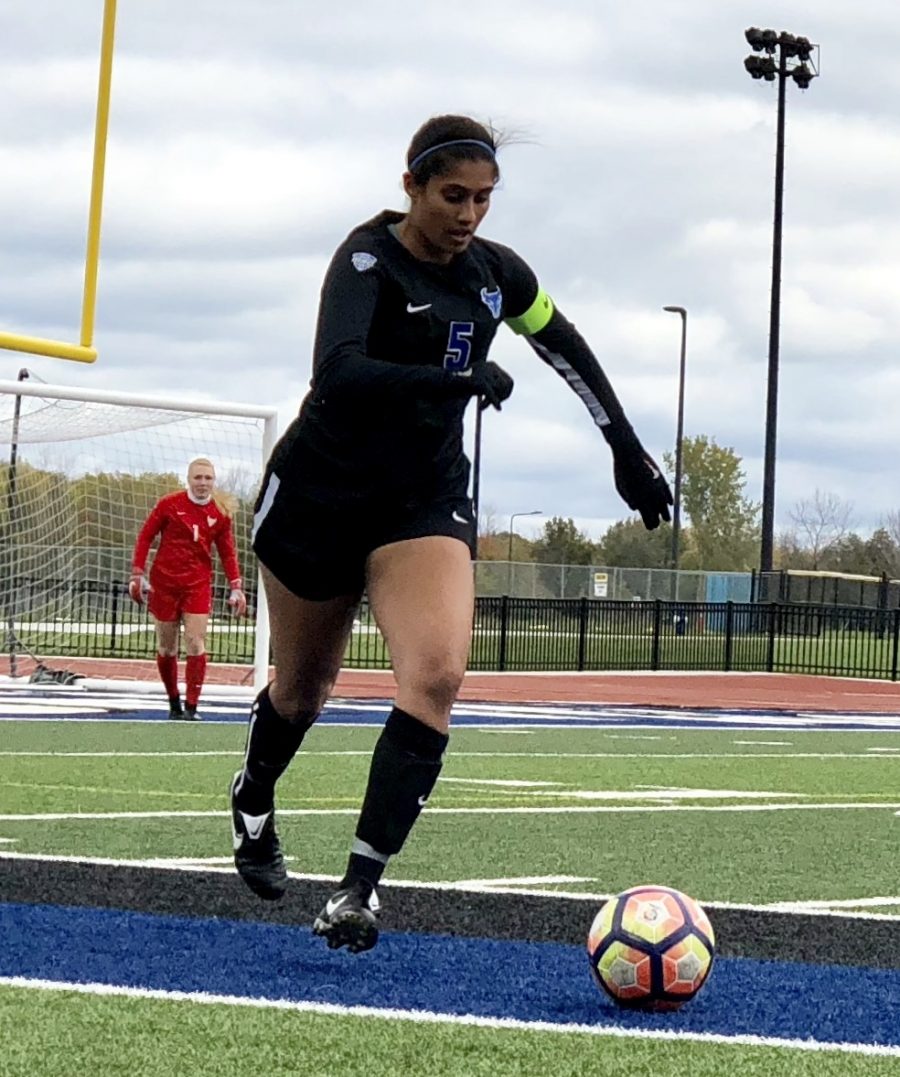 The spotlight is on: Center back Gurjeena Jandu is in her fourth year as a starter and second as a captain for Burke's crew.

The Canadian shined with six assists and a place on the All-MAC second team last year, but her play, especially in her own third and in transition, sputtered late in the season during UB's collapse. She'll be motivated for a big senior season.

Honorable mention to fellow senior Adrianna VanCuyck, who's been a useful player in multiple roles in her career, but has struggled to stay healthy.

Exciting newcomer: Riley Bowers, a transfer from Big Ten power Ohio State, spent two years in Columbus after graduating from Clarence High School. And it's not like she rode the pine for the Buckeyes; Bowers saw action in 19 matches as a freshman - scoring twice - before seeing her time dwindle last year.

The former Western New York Flash Academy star is a dervish of an attacking midfielder, with quickness, acceleration and confidence to find space and exploit it. And, while she might be 5'1, but she can strike a ball. She's a "first name on the team-sheet" kind of player.

BN Soccer's unheralded player: Hannah Callaghan. The Rochester native, whose twin, Abbey, is also on the Bulls, sure didn't play like a freshman last season, seizing the No. 6 role and showing an acumen and toughness beyond her years. She wasn't in XI for the opener against Navy but still logged 40 minutes. 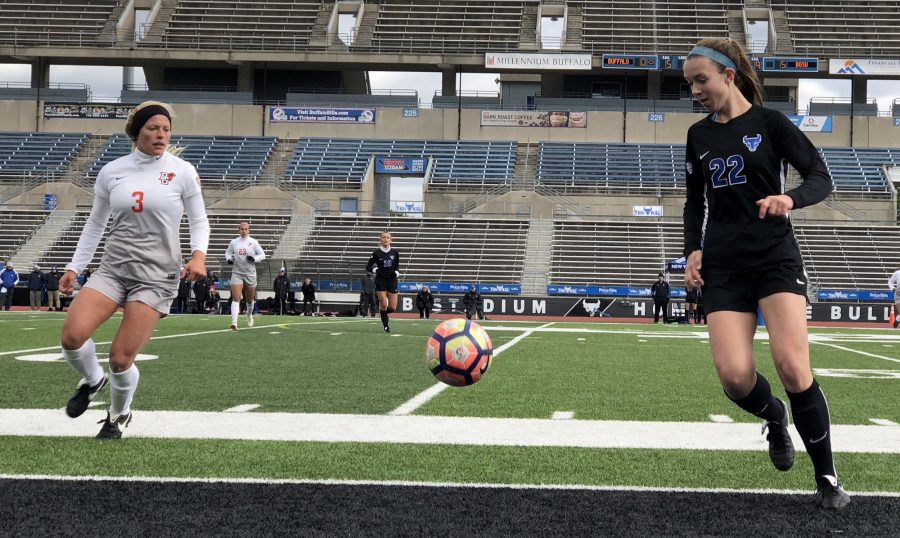 State of the team: Niagara was the Big 4's most accomplished team last season, topping Rider in the MAAC quarterfinals before falling to top seed Monmouth, 3-0, in the semis.

Head coach Peter Veltri enters his 21st year at the helm of the Purple Eagles, and even though he's not one to crave attention, the veteran gaffer has constructed his program well for the present and the future.

Sure, Gulley's leadership qualities and Guevara's athleticism at the back will be missed, but there's just so much talent left in the fold, especially in the attack.

Annie Ibey took the MAAC by storm last season, finishing second in goals (10), while Kelsey Araujo was Niagara's most creative player, a real nightmare to corral one-vs.-one; both earned a place on the All-MAAC second team. Ida Miceli was a revelation in her first year, featuring on the MAAC's all-rookie squad with Ibey.

[Look back: All the action from Niagara's MAAC quarterfinal win over Rider] 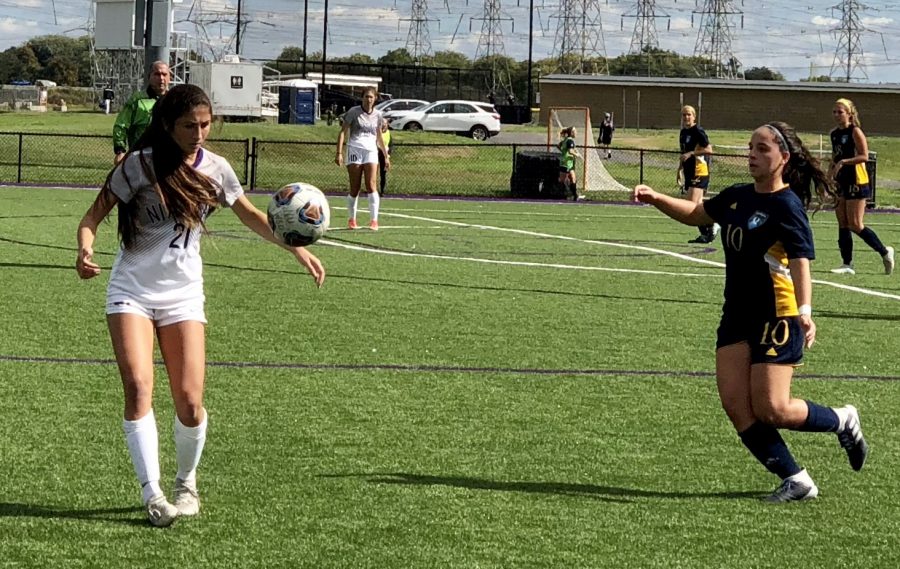 Even though their names are vaguely similar, Hadley Bucken, the 2019 captain, and Hailey Bicknell both bleed purple; they've bought in to Veltri's program and enter their senior years with the chance at a MAAC title.

Bucken will join classmate Selena Mangoni in fostering defensive continuity in front of goalkeeper Sabrina Locas, likely to have the No. 1 role to herself now that van Nuland has moved on. 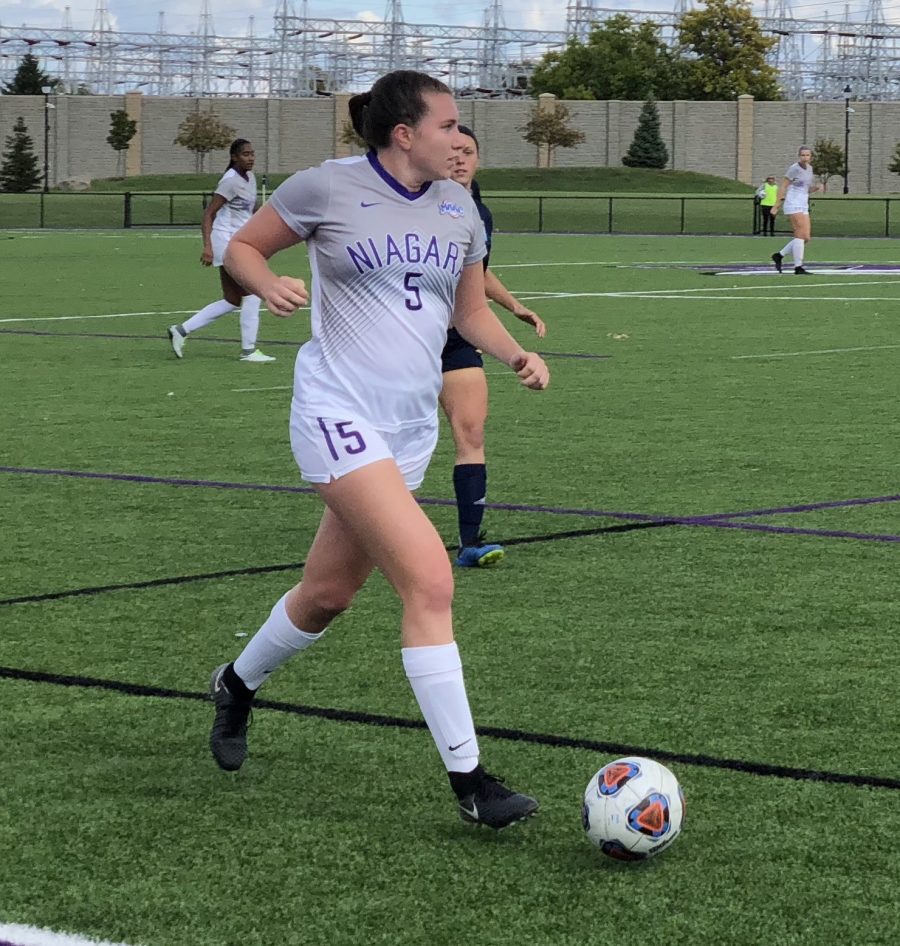 Hadley Bucken will play a pivotal role for the Purple Eagles in her senior campaign. (Ben Tsujimoto/News file photo)

The spotlight is on: Bucken. If there's any area in which Niagara might struggle, it's in the back line. Guevara was crucial as a ball winner who covered plenty of ground, taking pressure off her teammates.

How will Bucken gel with her new center back partner? At least from the first non-conference match, it seems like Mackenzie Mix will transition to that role; the redshirt junior certainly has the height to prove useful in that role.

Exciting newcomer: Florence Vaillancourt. Given Niagara's vast attacking options, the Quebec City recruit won't be asked to shoulder a big offensive burden immediately. The French-Canadian has sublime technical ability and a knack for scoring goals, but the transition to American college soccer could take some time.

BN Soccer's unheralded player: Veda Hensel isn't the first player opponents' fear on the Purple Eagles roster, but she's a spark plug in the midfield who plays bigger than her size. Quick with decent vision, Hensel is vital in getting the ball to Araujo and Ibey.

Preseason predictions: Niagara was picked to finish sixth in the MAAC. 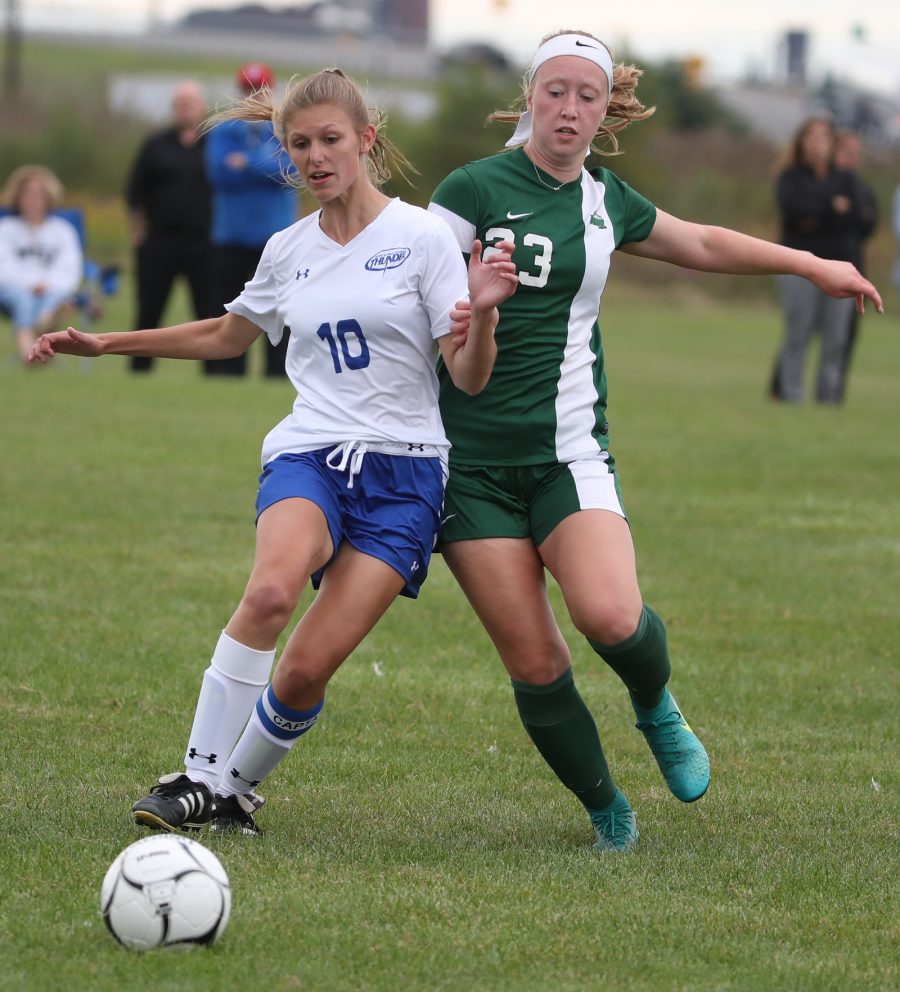 State of the team: Canisius' record could have been significantly better if Todd Clark's side was able to swing draws into victories.

The Griffs fought until the final whistle, though, thanks in part to the leadership and grit of two seniors, Melanie Linsmair and Emily Czechowski, who embodied the program's CHER mantra. Replacing their experience and reliability will be no easy task.

Despite Madeline Beaulieu's breakthrough season, in which she scored six of the side's 16 goals despite missing three matches, Canisius struggled to find the score sheet overall, averaging less than a goal per game.

Beaulieu returns to the fold, but she's quick to admit that she's not a natural forward, so finding productive attackers will be the challenge.

Two newcomers - Luca Fahmer, who started every game last year for Youngstown State in the midfield, and Jen Romero, a highly regarded Canadian freshman - are expected to contribute immediately, and goalkeeper Alana Rossi gives Clark one of the conference's top shot stoppers.

The spotlight is on: Beaulieu, the top returning player that opponents will prepare for. The Vestal native has put in her time at Demske, however, and could help the Griffs shock the pollsters who don't think highly of the program's chances this year.

Exciting newcomer: Fahmer brings strong collegiate experience and a history of winning, boasting back-to-back state titles for Spencerport in Rochester. She'll be different than the physical, tough Linsmair, but not necessarily less effective. Nardin Academy/WNY Flash Academy alum Abby Molloy has become a Day One starter at center back thanks to her ability to read the game beyond her years.

BN Soccer's unheralded player(s): Hey, look at all those local recruits. Canisius has given Buffalo-area products - especially those from the Flash Academy - a chance to shine at the Division I level. From Julia Schurr to Ali Jurkowski to Brianna Sorrentino to Molloy and more, plenty of recognizable faces dot the roster for local youth soccer fans.

Preseason predictions: The Griffs are predicted to finish ninth of 11 teams.

Notable additions: Nine freshmen dot Steve Brdarski's roster. It's tough to know, at this stage, how they'll fit in.

State of the team: It's been a trying tenure for St. Bonaventure's senior class, which has amassed a brutal 8-41-8 record over the last three years. Sydney Cerza, Sabrina Sousa-Sampson, Maddie Mason, Bella Marra, Bella May and Lauren Malcolm all remain from that 2016 recruiting class; that group will be desperate to finish its career on high note.

It didn't start well, as a 2-0 loss to Binghamton in the opener saw the Bonnies out-shot 20-4 and Marra sent off in the first half.

Goalkeeper Malcolm needs 169 saves to shatter the Bonnies' all-time record for career stops. It's unlikely she gets there, given her previous season high of 128 - but the Pennsylvania native should easily vault into second place. If Malcolm remains as durable as she has throughout her career in Olean, she's on pace to set the school record for all-time appearances.

The spotlight is on: The whole team. It's hard to shake the feeling that another long year lies ahead for the Bonnies, who compete in the toughest conference of the Big 4 teams and seem to fall short in attracting the best local recruits. Collecting a few wins during the non-conference slate would inject some confidence and hope in a side that badly needs it.

Exciting newcomer: Kenzie Tarmino, a freshman from a historically strong Fairport program, has family connections to Bonaventure - her mother was also a Bonnies women's soccer player - and Kenzie has already carved out a role on defense from the get-go. Christine Napoli and Rachel Hutchison are also expected to make an immediate impact in their first year at Marra.

BN Soccer's unheralded player: Emily Foltz was a bright spot for Brdarski as a freshman, scoring two clutch goals - one to beat conference foe Duquesne in double overtime and another to equalize against local rival Canisius. She's tough, physical and a hard worker, three traits that make her fun to watch.

Preseason predictions: The Bonnies are projected to finish 13th out of 14 Atlantic 10 teams.