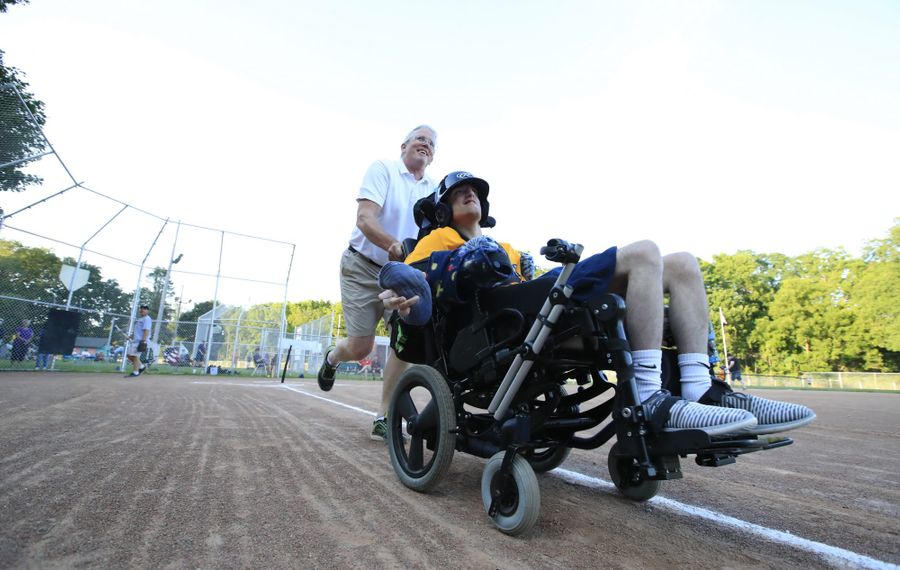 The greeting was familiar, old friends reunited as teammates on a baseball field. "Hi, Rory," said Aaron Cohn, welcoming another young man near a baseball diamond at Community Pool Park in East Aurora. "I miss you in school."

Cohn and Rory O'Connor attended classes together a few years ago, before they happened to end up on the same team this summer in the Aktion Club league. Cohn is a boisterous guy with a big personality – "I'm Babe Ruth!" he shouted from the plate Wednesday during one at-bat, bat lifted toward the fence – and his greeting to Rory might have been heard on any baseball or softball diamond in the region.

That was the beauty of it. Cohn was born with Down syndrome. Rory, 20, who will graduate next spring from Hamburg High School, uses a wheelchair because of cerebral palsy. The four-team league, sponsored by the James J. Lilley Foundation under the Aktion umbrella within the East Aurora Kiwanis Club, was created for women and men with developmental disabilities.

Rory's condition is severe enough to make it hard to speak or use his arms and legs. While Julie O'Connor, his mother, watched from the crowd, Mike played a role on the field shared by many volunteers: He stayed with Rory as he played the outfield or took his turns at bat, father and son communicating on a level of intimate understanding that demands few words.

Despite Rory's physical limitations, his cognitive abilities are unaffected. Michael, a lawyer, said that when his son becomes excited, the jolt of emotion causes rigidity in his arms, which his parents often recognize as a signal of elation.

It also creates a major hurdle in baseball, even with a softer version of the ball. "Hitting can be a little difficult,” Mike said. For Rory's final game of the season Wednesday, the father employed the same thinking he used throughout the summer.

Some players batted against a pitcher, while others – including Rory – chose to hit off a tee. To make it happen, Mike put his hands over his son's, their grasp becoming one. They swung together, the ball bounding across the infield as they headed toward first base, Rory smiling while his father pushed and ran. 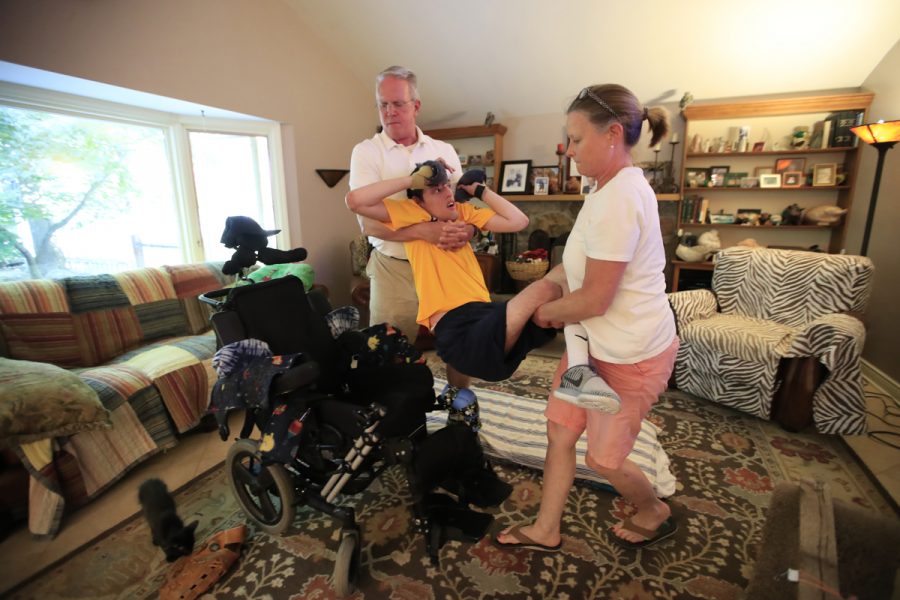 "Way to go, Rory!" shouted Kirsten Weisberg, a teammate and a friend who knew him from many years in a dance program.

Rory's only sibling is his twin brother, Gannon, whose first day of college at Alfred State College was Wednesday, meaning his parents hurried to the game after that long, quiet drive home. In 1998, Julie gave birth to the two boys more than three months early. They each weighed less than 2 pounds at birth, so tiny either one could have fit in Mike's open palm.

While they grew into twins in the mysterious ways of sibling understanding – Gannon's parents describe him as an empathetic caregiver with an intuitive ability to sense his brother’s moods – their childhoods had unique trajectories.

Gannon was "typical," to go by formal educational language, though it is a word the O’Connors respond to with bemusement. He graduated from Orchard Park High School, went to Erie Community College and on Wednesday became the first of the twins to move away.

“It’s no different than it is with any family,” Julie said of the power of that moment, a reflection that is also a kind of fierce daily philosophy.

For years, until the twins became preschoolers, Julie worked as a nurse practitioner in the emergency room of Children's Hospital in Buffalo. She said the challenges of raising Rory in infancy sometimes caused her to lament the cosmic fairness of their situation.

Her perspective changed, she said, when Rory was 2. Julie and Mike learned the child had liver cancer. Their little boy was suddenly in chemotherapy, his life at risk.

You understand what to appreciate, she said, when “your kid doesn’t die.” 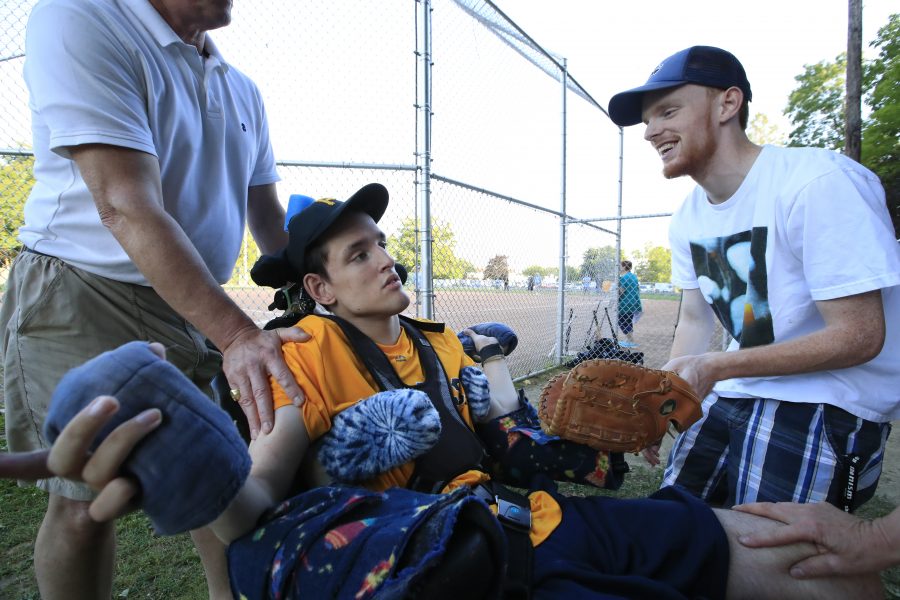 Rory and Gannon O’Connor, twins born more than 20 years ago, spend some time together while Rory awaits his next turn at bat in East Aurora's Aktion Club league. (Harry Scull Jr./Buffalo News)

It was the beginning of the journey that led Rory, this summer, to a baseball field. Julie and Mike wanted their sons doing as much as possible together, including preschool. But the couple quickly discovered there were few inclusive options 18 years ago that were welcoming both for "typical" children and those with profound physical disabilities.

In response, Julie shrugged off Mike's hesitation and started “Wee Can,” a day care that soon evolved into a full-blown preschool. "As usual, I'm glad she didn't listen to me," Mike said.

It is still going strong, with an enrollment of 93 children and an essential theme that goes back to what the couple learns every day, from Rory.

“The person in the chair is very much like you and I,” Mike said. Rory, they said, has sharpened and broadened their sense of wonder and appreciation, expanding their definition of "typical." As for Gannon, it bothers him when people react with rudeness or alarm to his brother, because their response simply proves how much they cannot see. 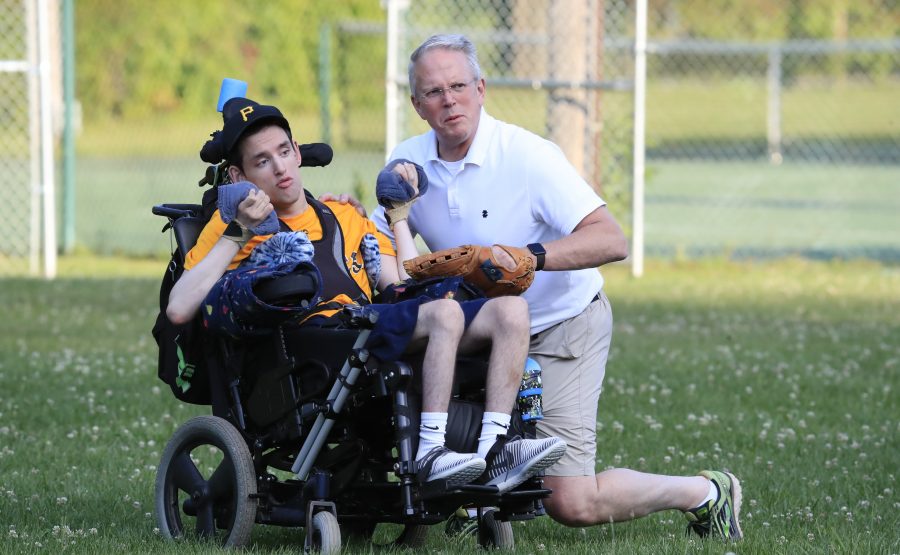 Rory O'Connor and his father, Michael, watch the batter and prepare for the next pitch from left field in an Aktion Club league game. (Harry Scull Jr./Buffalo News)

“He’s totally self-aware and knows what’s going on,” Gannon said. With that understanding, Julie and Mike have tried to create as many opportunities as possible for Rory, whether in adaptive skiing, a dance program called Moving Miracles or by traveling to the auto races Rory loves, at tracks where he shows utter joy in the raw speed.

The chance this summer to play baseball was yet another piece. Mike learned of the league through Don Bach and John Voss, fellow board members with Suburban Adult Services of East Aurora. Almost 20 years ago, Bach and Paul Synor co-founded the Aktion Club, behind a goal of helping those with developmental disabilities enjoy a more robust place in community life.

In 2006, they added a baseball program that soon evolved into four teams with more than 90 players, including some who use wheelchairs, operated cooperatively with the Town of Aurora parks department. Knowing Rory's story, Bach and Voss mentioned the league to Mike. He checked with his wife and son and signed up Rory, a decision that carried a wistful note.

Mike's dad, Buffalo lawyer John Fromen, died last year. He was selected by the Detroit Tigers in the Major League Baseball draft as a young man, and in his later years – as he went through his own struggles with health and mobility – Fromen developed an especially close kinship with Rory.

"He would have loved this," Mike said of the Aktion league, which has already provided the family with some lasting memories. 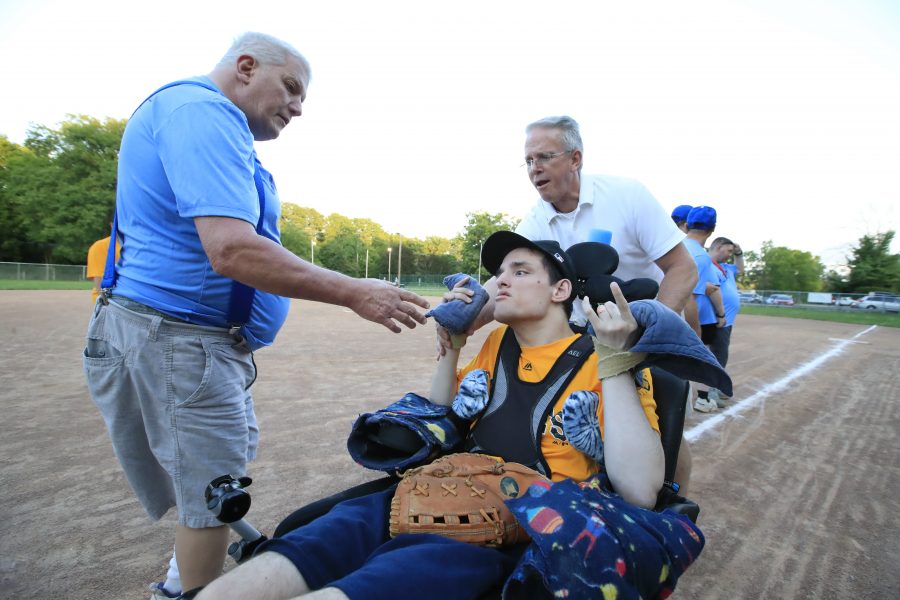 Rory O'Connor of the Pirates in East Aurora's Aktion league shakes hands with players and coaches from the rival Royals at the end of a game. (Harry Scull Jr./Buffalo News)

Mike and Rory were in the outfield Wednesday when a guy on the opposing Orioles blasted a fly ball into the left-center alley. It seemed a sure double or triple, until one of Rory's teammates, center fielder Adam Tober, chased it down and made a one-handed grab that brought a roar from players on both teams.

For Mike, there is particular pleasure whenever Rory takes his cuts. In Wednesday's final inning, son and father used their combined swing to hit a bouncing grounder. They made their way around the bases, scoring after fellow Pirate Meghan Collins whacked a single that brought Rory home to much applause.

He was grinning when his mother greeted him, behind the backstop. The season officially ended once Larry Johnson, a volunteer, draped a medal around each player's neck, before everyone gathered around some picnic tables to do exactly what thousands of Western New Yorkers in countless leagues do after their last game.

They ate pizza in the twilight, in no hurry to go home.