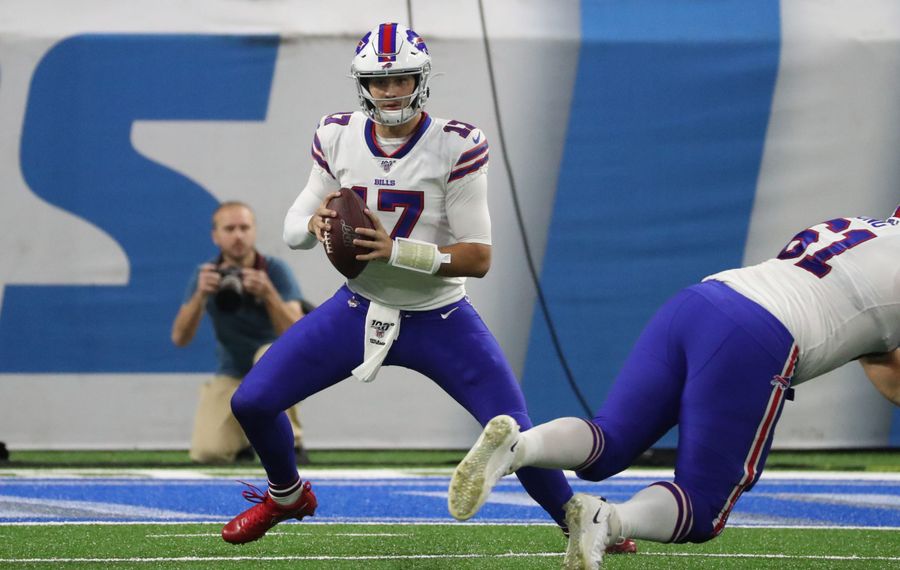 DETROIT — At one point, desperation finally got the better of Josh Allen.

So did a bit of immaturity ... and recklessness.

With the Buffalo Bills making a clear emphasis on the run in Friday night's 24-20 preseason victory against the Detroit Lions, Allen found himself with limited chances to make plays with his arm during the one half he played.

For some reason, he thought it would be a good idea to try to make one while under pressure late in the first quarter at Ford Field. And while throwing across his body. And firing toward the middle of the field where a bunch of Lions players were gathered. Linebacker Jalen Reeves-Maybin was able to make an easy interception.

Fortunately for Allen and the Bills, Lions linebacker Christian Jones made an even dumber play by being penalized for a late hit on the quarterback after the throw. That kept the drive alive, and the Bills would march for a touchdown. But Allen knew he had erred. Badly.

"Obviously, I wish I was a little smarter with the football tonight," he told reporters. "There was one play in particular we got bailed out there, but it's something that I just can't do and I know I can't do that. ... I understood that we wanted to run the ball and I wanted to take a shot, and I can't go with that mindset.

"But I'm glad it happened in the preseason. It was just a little reminder of what I can and can't do."

Unlike the Carolina game, in which Allen displayed superb patience in looking to work short passes to Cole Beasley underneath coverage and finding openings to deliver to tight end Tommy Sweeney, the quarterback seemed overly anxious. On multiple occasions, he looked out of sync with his receivers on shorter routes. There was an overthrow intended for Zay Jones to kill a third-down conversion on the Bills' first drive. There also was a ball that sailed behind Beasley to cause their second possession to stall.

"Yeah, just some communication things," said Allen, who completed three passes for 49 yards and had a passer rating of 77.8. "Obviously, I could have delivered a better ball. I wish I did in those situations. But, again, it's something to learn from. Get on the same page here. It takes a couple of those to understand we're lacking communication somewhere, so like I said, I'm glad it happened now. We can address it and go on from there."

Allen's throwing ability, which had been on full display through the two series he played in the preseason-opener against the Indianapolis Colts and in both of his possessions the following week against the Carolina Panthers, took a back seat against the Lions.

He threw a mere six times. Meanwhile, the Bills had 18 running plays. Frank Gore and LeSean McCoy combined for 14 of them, giving the offense pretty much its only bright spot of the night.

"We went out today and we set our mind to trying to establish the run first," Allen said. "A couple plays, we got ahead of ourselves there and put ourselves in some bad situations, but we stuck with it, popped out some really good runs with Frank and LeSean."

For Allen, the night wasn't a total failure.

He responded well while operating, for the first time this preseason, a two-minute drill. It began after the Bills look over at their own 5, thanks to one of many special-teams penalties, with 3:37 left in the half. Three straight Gore runs gave the Bills a second-and-six from their 19-yard line. Allen's seven-yard scramble gave them a first down at the 26 with 1:53 left. Then, on back-to-back plays, he connected with speedster John Brown for gains of 18 and 17 yards to the Detroit 39.

A 21-yard run on a draw to McCoy, with additional yardage tacked on from a horse-collar penalty, moved the ball to the Lions' 9, from where Devin Singletary ran in for a touchdown.

"(Brown) did a good job of getting the ball and moving it upfield," Allen said. "It was just good to be part of it operation-wise, having a live two-minute situation that I haven't had yet. Those are ones that we need to have and we got that one there."

"I thought it was impressive in the two-minute drive," Sean McDermott said. Of course, the coach took note of the not-so-pretty moments of Allen's night.

"We've got to make smarter decisions with the football," McDermott said. "Whoever carries the ball or throws the ball, that ball makes a big difference in the game."

After 10 preseason series, how ready does Allen feel to begin his second season as the Bills' starting quarterback on Sept. 8 against the New York Jets? He answered without the slightest hesitation.

"I'm ready to go," he said. "I can't wait for Week One, playing real football, understanding that this type of football in the preseason, it helps us get ready for that. I think we're itching to get out there and play some real football. Speaking for myself there, especially, I'm just chomping at the bit.

"I know our offensive focus is we're ready for it."