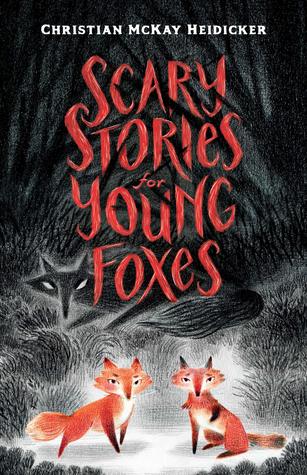 On chilly autumn nights, seven fox kits ignore their mother's warning and slip out of the den to "Bog Cavern" where a storyteller terrifies them with one story after another in this dazzling novel that has all the makings of a classic. (One cover blurb hails it as "the next Watership Down.")

From the first page, Heidicker casts a spell with his musical prose, finding a sinister undercurrent in what might seem to be a pretty autumn scene in the forest: "The sky grayed, the leaves blushed red, and mist coiled through the trees like something alive. Even the pumpkins began to rot and show their true faces."

Black backgrounds with white type separate Mama Fox's interactions with her pups in the present ("please stop biting my face, children") from the storyteller's tales. Heidicker paints a vivid picture of the world of the fox, the lessons kits must learn about eluding predators and hunting for food (peaches and centipedes are a favorite treat), the privations of winter, the danger of roads, the pack order with the bullying alpha, the reality of sudden death. The cruelty of the predator-prey world of nature is made vividly real, and the monsters are truly terrifying, whether it be a fox's dangerous transformation (beware the "gooey eyes"), a grinning swamp creature known as Golgathursh, a human "who peels foxes' skins," or the lurking presence of  violent "Mr. Scratch" who requires complete submission from his vixens and kits and has no tolerance for the runt of the litter.

Adults reading this aloud will get a chuckle out of Heidicker's imaginative and truly terrifying depiction, from a fox-eye view, of a certain author-illustrator of beloved children's stories who caught wild animals in a steel trap and kept them in cages, feeding them oatmeal while she sketched and painted them, sometimes posing them in bonnets, before doping them with ether and killing them.

After pages of terrifying suspense, Heidicker brings his tale to a neat conclusion, finding his heroes in young Mia, the sole survivor of her litter, and Uly, a fox kit born with a deformed front leg, bullied by his siblings, and marked for death by Mr. Scratch. 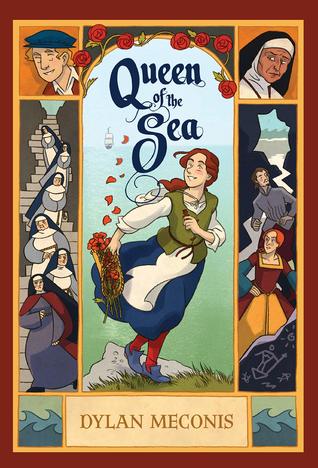 Gorgeous cartoon panels and the fresh voice of a young narrator bring to life this entertaining, meticulously crafted alternative history, inspired by the early years of Queen Elizabeth the First and set in a convent on a remote island. It's also a fascinating coming-of-age tale, of a young girl growing up on the island and of the court intrigue that brings a friend into her life before snatching him away again, and of the arrival of the banished Eleanor, who changes everything.

Young Margaret, apparently the daughter of unknown parents, has grown up on the island in the care of the Elysian sisters but the quiet routine is interrupted by the arrival of young William. The two become friends, exploring the island  and getting into mischief. Meconis offers a vivid backdrop in the island setting, with its Homeward Cliffs, a hill called the Barrow where the Old People supposedly buried their dead, a hidden cave on the beach, the strange rocks of the Stone Circle, a narrow stairway carved into the cliff.

The novel is filled with fascinating details of 16th century convent life.  In fact, the period details seem so realistic the reader might be left wondering if the story of King Edmund and princess Eleanor might actually be true.