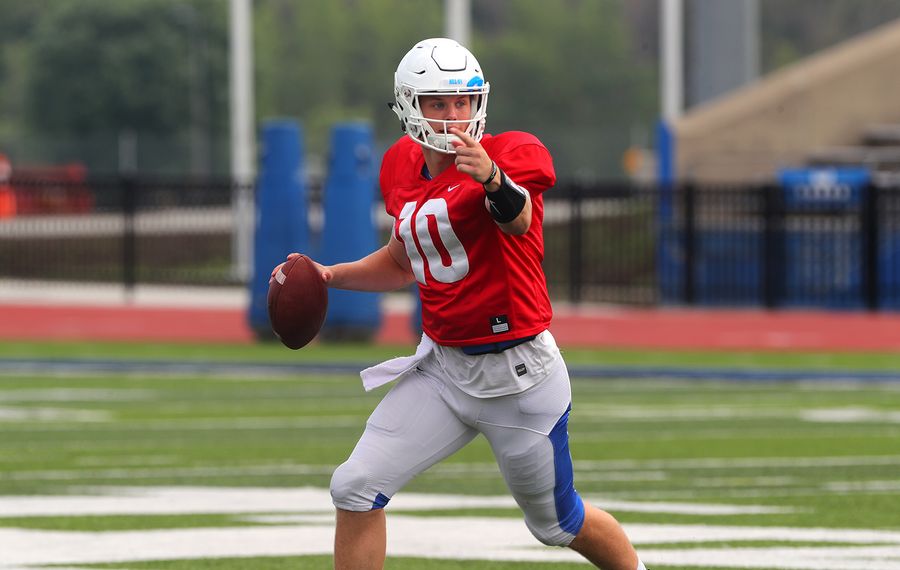 The University at Buffalo will turn to a local high school product as its starting quarterback.

Matt Myers will be the Bulls’ starter when they open the season Aug. 29 against Robert Morris.

“I didn’t know what to expect,” said Myers, a redshirt freshman and the 2017 Connolly Cup winner at West. “I knew I was going into a good program where I could learn right away, from Tyree (Jackson) and he definitely helped out a lot, with his departure, going to the NFL, I thought, ‘it’s time to go, it’s time to get focused, now it’s time to step up.’ ”

Myers won the starting spot over Kyle Vantrease and Dominic Johnson. Of the three quarterbacks, Myers is the candidate with the least collegiate experience in the three-player quarterback competition, and he missed the bulk of spring practices because of a hamstring injury. Myers only appeared in one game as a true freshman in 2018, in the regular-season finale on Nov. 23 at Bowling Green, and did not throw a pass.

"We needed, essentially, to give him an accelerated spring practice in the first part of this camp, to give him the full evaluation so we could see all the things he brings to the table," Leipold said.

“He brings the ability to operate our RPO (run-pass-option) schemes and to give us what we feel, right now, to give us the best chance to be a winning football team."

Myers played in an offense at West that incorporated college-level play concepts, which he said helped him in his adjustment.

“Reading the offense and defense, with the passing concepts,” Myers said. “One concept on one side and the other on the other side, but that definitely helped in getting ready for the offense. It’s different terminology but at the same time it’s the same concept.”

His resume from West Seneca West is impressive. The 6-foot-4, 220-pound Myers established himself as a dual-threat quarterback. He became an All-Western New York and all-state player who passed for 2,397 yards and 24 touchdowns and ran for 1,037 yards and 22 touchdowns in 2017, and helped West win the New York State Public High Schools Athletic Association Class A championship that year.

Now, Myers must give the Bulls, the defending MAC East champion, the best chance to win.

Myers will have to help usher a group of wide receivers that is inexperienced and has been thinned out this preseason due to injuries to Antonio Nunn and Jovany Ruiz.

Vantrease will be the No. 2 quarterback behind Myers. During UB’s final preseason practice on Thursday, Johnson worked with the wide receivers.

“We’ll find ways to get Dominic on the field,” Leipold said.

The redshirt sophomore from Stow, Ohio, was the primary backup to Tyree Jackson in 2017 and 2018.

Johnson is a redshirt junior from Windsor, Ont. He completed one of two passes for four yards and was intercepted once in four games in 2018. He redshirted in 2016 and did not play in any games in 2017 as a redshirt freshman.

“This is a dream come true,” Myers said. “I was so happy when I found out but at the same time, Kyle and Dom, I can’t thank them enough for helping me get here. Help (by) competing every day and pushing me to get better and correcting me. I know they’re still going to do that. As a group, as a whole, we’re all still going to get better.”