The owners of Belt Line Brewery & Kitchen toyed with the idea of opening their craft brewery along Transit Road in the suburbs after their first plan to build in an Elmwood Village warehouse fell through.

Instead, they opened earlier this year in Larkinville, a neighborhood east of downtown where once-sprawling factories now stand repurposed as professional, commercial and residential spaces.

“More foot traffic would have been nice, and we get some down here, but we wanted to be in an exciting place and to us, the excitement continues to build here,” said co-owner Mark Boccabella.

Belt Line sits among a strand of 11 breweries that spans three neighborhoods, all within 1.8 miles of each other and within a mile of the city waterfront, making them part of what can be called Buffalo's first brewery district since a similar concentration dotted the East Side in the decades before Prohibition.

[Related: Where to go, what to try in Buffalo's downtown brewing district] 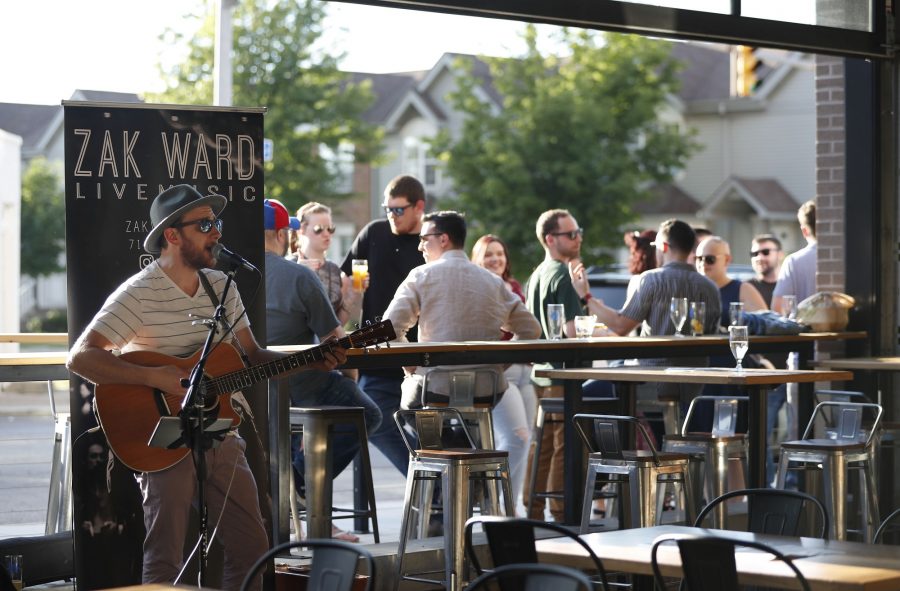 "People were walking from brewery to brewery and kind of hanging out and taking it all in,” Domres said.

Three other breweries are within walking distance of each other: Gene McCarthy’s, Pressure Drop and the newest, Resurgence in the Old First Ward, with Buffalo RiverWorks a stone’s throw across the Buffalo River on Kelly Island.

Pearl Street Grill & Brewery, Sato Brewpub and Labatt Brew House are in the neighboring Canalside district, with Hofbrauhaus scheduled to open nearby in the fall. That 12th brewery would mean a quarter of the small breweries opened regionally during the new Buffalo craft era would sit inside the district.

[Click here to view a full-size version of this map]

The brewery district began to take shape about five years ago but traces its origins to 1997, when downtown hotel operators begged Earl Ketry, principal owner of Pearl Street Grill & Brewery, to open on Sundays.

“We didn’t want to do it because it was a ghost town,” said Ketry, who, despite those Sunday concerns, saw potential for a downtown brewery district.

Four of the key players from the early days of the recent craft beer era work within the new, organically grown district. Ketry was the first to build there; Tim Herzog started Flying Bison Brewing Co. in 2000 and moved it to Larkinville in 2014. Community Beer Works opened in Hydraulic Hearth less than a week later that fall. 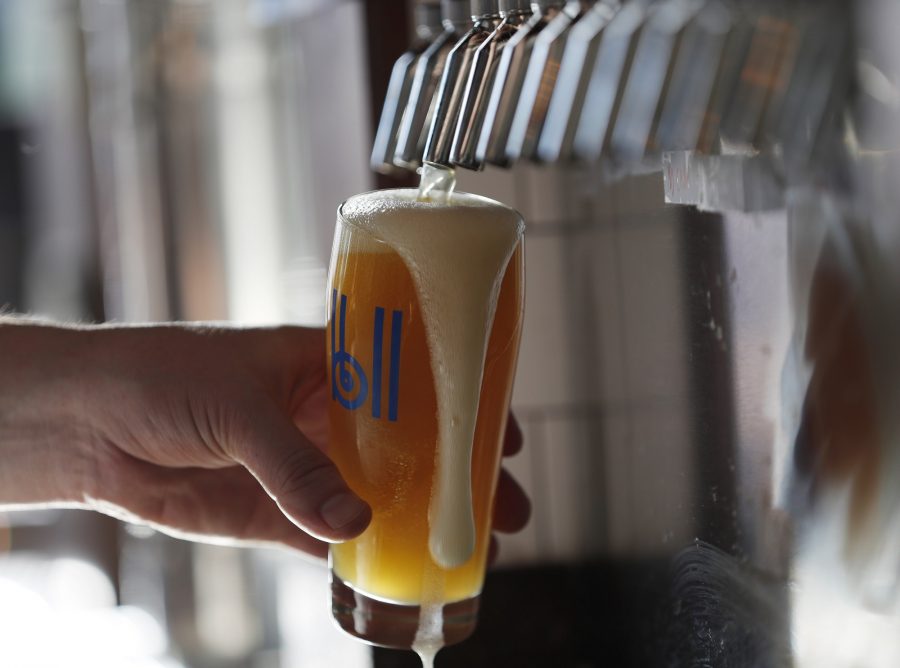 Belt Line Brewery & Kitchen, at Swan and Hamburg streets in Larkinville, is among five breweries that have opened during the last two years along or near the Buffalo waterfront. (Sharon Cantillon/Buffalo News)

Almost all of the breweries have redesigned and reinvigorated century-old structures, harking back to a time when a growing German and Polish American population brought their beer-drinking culture into a city flush with European immigrants.

Breweries in the mid-1880s cropped up along Broadway, as well as Emslie, Exchange, Genesee, Main, Niagara and Seneca streets. By the last decade of the 19th century, however, larger brewers in Buffalo began to turn some of those, as well as hundreds of taverns, into “tied houses,” in which the biggest of the brewers offered to help finance the smaller enterprises in exchange for selling their beers.

A few survived Prohibition – making “near beer,” sodas and other products until 1933 – but their run had ended by the early 1970s, after national beer makers gobbled up the regional market.

Iroquois was making about 350,000 barrels during some of the post-Prohibition years, Domres said. “If you took all the brewers in Western New York today, we wouldn't even touch a quarter of that.”

That said, what has become the new Buffalo brewery district nearly doubled in size during the last two years.

Ketry – an accountant who put himself through Canisius College a half-century ago while working at Bethlehem Steel – decided to open RiverWorks after he sat in a lawn chair in what is now River Fest Park in the Old First Ward. He saw the backside of sprawling former warehouse complex across the Buffalo River that he believed could serve as the front side of a waterfront sports, entertainment and restaurant business, and one day feature a brewery tucked inside six former grain silos on the property.

RiverWorks opened in 2014 and added a brewery three years later, becoming the fifth craft beer maker along the waterfront. 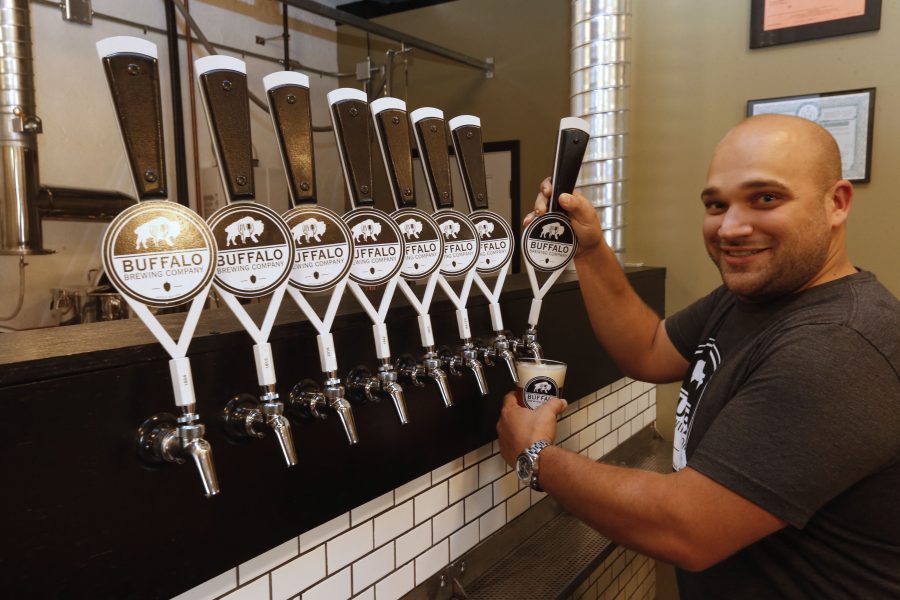 “I think as you're seeing the neighborhood grow and change,” Domres said of Larkinville, “and when Belt Line opened earlier this year, that was kind of a game changer for us, because they did a really good job of getting a lot of traction” on social media.

People are coming into the new district to hit a couple or three breweries, grab a bite to eat, and explore the neighborhoods or waterfront on foot, by bike or kayak, said Boccabella, the co-owner of Belt Line Brewery & Kitchen.

There has been an uptick in brewery bus tours in the district, he said. Breweries in Larkinville and the Old First Ward also are catering to Sabres, Bandits and music fans who grab dinner and a beer, then take an Uber to and from KeyBank Center, saving money on parking.

The beer district dynamic, as well as entertainment such as kayaking, zip lining, rock climbing and an escape room, helps explain why roughly half of those visiting RiverWorks this summer came from outside Erie County, Ketry said. Other brewery proprietors also have seen an increase in out-of-towners, particularly during the warmer months.

It also explains how beer figures in to lots of small and medium-sized projects that have reshaped the Buffalo waterfront and propelled the city's economic revival.

“I just was reviewing my Pearl Street figures,” Ketry said recently, "and let's just say we did almost 50 to 75 times more this past Sunday than what we did that first Sunday 22 years ago.”