In keeping with its name, “A Quiet Place 2” has maintained a low profile while filming locally this summer, but it is becoming the biggest movie ever shot in and around Buffalo.

And it continues to do so – very quietly.

With Monday's announcement that one of the four Grand Island bridges would be closed to traffic for 13 hours, from midnight Saturday to 1 p.m. Sunday, production on the sequel to the successful 2018 film will touch at least seven local communities.

Along with Grand Island, filming already has taken place in Olcott, Akron, Dunkirk and at an undisclosed sound stage in Buffalo. Filming also is expected to take place in Orchard Park and at Stenzil Street Field, a baseball park in North Tonawanda, next month.

And those are just the confirmed locations, with filming expected to continue through September.

“I do feel that it will be the most impacting film ever to be shot here,” said Tim Clark, film commissioner for the Buffalo Niagara Film Office, noting the strong economic impact of the movie. "There is a lot of Western New York that will be utilized by them and has been utilized by them. It’s not just city-centric or directly in Buffalo or Niagara Falls. It is really spread out through the Western New York region. That is nice because they are spending money in these communities and having a good economic impact in these communities.”

While films from "The Natural" to "Marshall" were drawn here by our historic architecture – especially the art deco City Hall – “A Quiet Place 2” is utilizing Buffalo's industrial sites and local small towns for the look it needs to show the aftermath of an alien invasion as depicted in the original hit film.

Residents of Olcott reported being asked to not mow their lawns for three weeks, and "Do Not Mow" are up near the historic Orchard Park depot where the movie is expected to film. In Akron, storefronts along Main Street were given a face-lift. 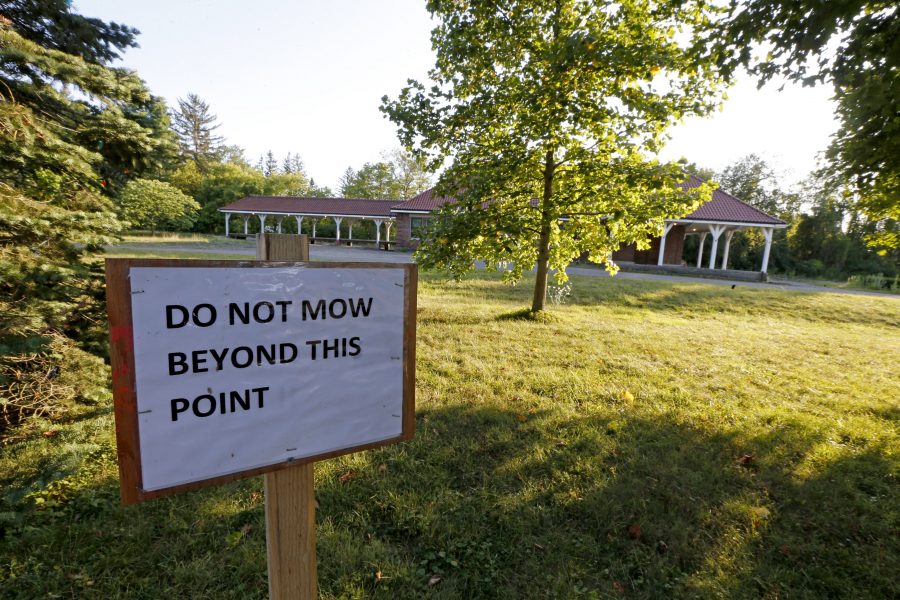 "Initially, the appeal of Western New York on a whole has drawn them here. Certainly we have lots of old industrial sites, but there is a unique look here they found appealing," Clark said.

Clark said moviegoers will immediately recognize some of the settings, such as the Grand Island Bridge, and not others. But he said it has become clear that the Buffalo area will be getting plenty of close-ups.

"Western New York will forever be emblazoned to this movie, very much like ‘The Natural,’ " he said. "Think about how many years ago ‘The Natural’ was shot here, but it’s still a very popular movie in Hollywood history and we look back at it as a prideful moment in Buffalo stardom. And I feel we’ll feel the same way with this."

[RELATED: Olcott is ready for its close-up as "A Quiet Place 2" production begins]

The film's cast and crew also have been quietly making themselves familiar with the area in their free time, with visits to Buffalo Bisons' games, Larkinville for music, the Maid of the Mist, Cave of the Winds and the Erie County Fair, where the Demolition Derby was a big hit.

The original "A Quiet Place" from Paramount Pictures grossed more than $340 million worldwide on a budget of $17 million and was a hit with fans and critics. It starred real life husband-and-wife John Krasinski and Emily Blunt as a couple trying to protect their family from alien creatures that hunt by sound. Krasinski is again the director and writer for the sequel; Blunt, Millicent Simmonds and Noah Jupe return.

The sequel also stars Cillian Murphy (“The Dark Knight”) and Oscar-nominated actor and Marvel star Djimon Hounsou (“Guardians of the Galaxy,” “Captain Marvel”) who replaced actor Brian Tyree Henry who had a scheduling conflict. "A Quiet Place 2" has a release date of March 20.

Paramount was last in the Buffalo area in 2015, shooting scenes for "Teenage Mutant Ninja Turtles 2" on Route 33, the Kensington Expressway.